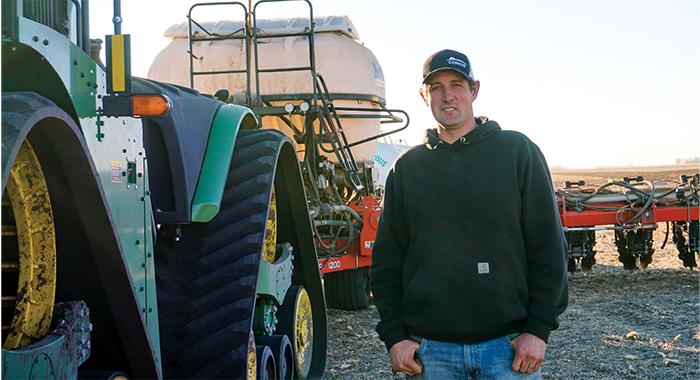 An annual investment in fertility benchmarking combined with an evolving strip-till system has increased yields and lowered per-bushel N ratios for Chris Armstrong.

North Bend, Neb. strip-tiller Chris Armstrong was just over the age of 30 when he made the switch to strip-till in 2014. That first year, he also decided to enroll in the Pioneer Encirca nutrient management program, investing $10 per acre in creating a database with a goal of more accurately applying fertilizer based on field-specific prescriptions.

While he admits it was somewhat of a gamble, it’s one that has warranted an annual investment of nearly $11,000 and contributed to an overall yield boost of 10 bushels per acre in corn.

Strip-tilling 1,200 acres of corn and 700 acres of soybeans, in a relatively short time, Armstrong has been able to push soybean seeding rates on higher producing acres and lower his ratio of applied nitrogen (N) to less than 1 pound per bushel.

The driving factor behind Armstrong’s initial transition to strip-till centered on improved nutrient placement, noting the practicality of being able to place fertilizer precisely where he was going to plant.

In addition to more targeted placement of fertilizer, Armstrong also noticed considerable improvements to field drainage in the seasons that followed, particularly in lower areas of his fields prone to being swamped out by heavy rain.

“A lot of our susceptible areas are…