Cover cropping experiments, the power of earthworms and an economic entry point into the practice were among the highlights of the sixth annual National Strip-Tillage Conference.

2019 has tested the resolve of many farmers. So it was refreshing to experience an overall optimistic environment at the 6th annual National Strip-Tillage Conference in Peoria, Ill. Many of the 338 farmers, researchers and industry professionals assembled with a shared objective of making lemonade out of lemons in 2019, but they also sought opportunities to rebound in 2020.

Cost Savings from Cover Crops. Planting green was a topic of curiosity and conversation among attendees during a roundtable session. The cost savings associated with planting green and using cover crops is a cumulative effect, and growers will see results the following year based on what they have learned from previous years and the inevitable mistakes that will happen.

Practices vs. Principles. Cambridge, Ill., strip-tiller and no-tiller Monte Bottens challenged attendees to understand the difference between strip-till as a practice and principles that contribute to an effective system. As he says, “principles apply everywhere,” whereas “practices apply locally.”

Soil Armor. “Nobody wants to farm naked,” says Bottens and so keeping the soil covered with a layer of armor is important to protect it from wind and water erosion, while also improving infiltration rate and weed protection.

Continuous Life. Something should always be living on and in your soil. In Illinois, Bottens acknowledges farmers only have about a 6-month growing season, and it’s even shorter the further north you go. “The more we can have a root pumping solar energy into the ground, the better,” he says. “We think plants leak a lot of sugars to feed the microbes, right? Recent research from Dr. James White, shows that during the rhizophagy cycle, plants actually incubate microbes, propagate microbes, and eject those microbes into the soil. It’s not that we’re feeding the microbes in the soil, plants are growing microbes.”

Livestock Integration. Bottens admits that livestock isn’t a fit on every operation, but there is a measurable soil health benefit, particularly when paired with cover crops. “With no-till, strip-till and corn rotations, we can gain maybe a 0.1% per year in organic matter,” Bottens says. “Incorporate cover crops and we can get maybe as much as 0.2% organic matter growth per year. We put those four-legged critters out there, we can double those amounts, to as much as 0.5% per year.”

Strip-Till Smarter, not Harder the First Year. When Kent, Ill., farmer Seth Wenzel started strip-tilling in 2013, he wasn’t in a position to invest in a brand new toolbar, row units or elaborate fertility program. So he bought an old 24-row DB60 bar with Redball strip-till units. 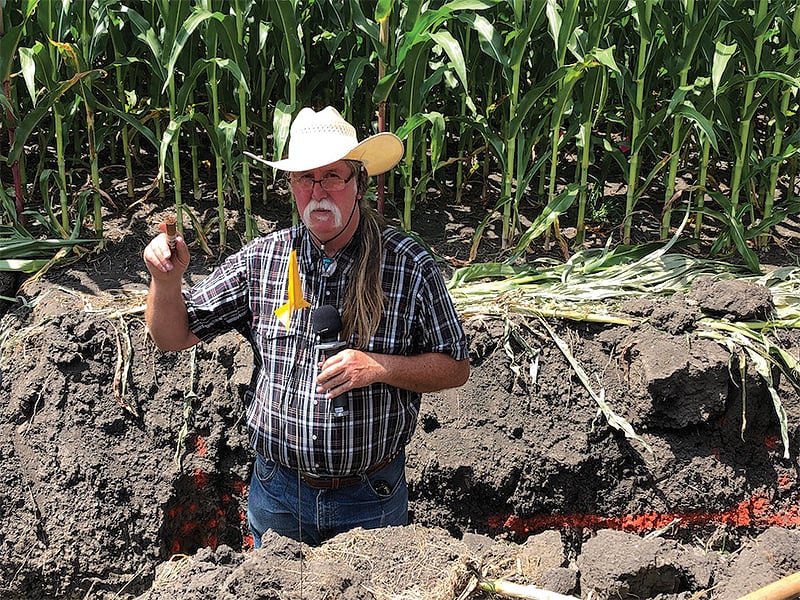 DIGGING IN. Researcher Frank Gibbs took 40 attendees into the field for a post-event demonstration of earthworm activity in a cornfield that has been no-tilled for the last 50 years on host Aaron Ehnle’s farm in Edelstein, Ill. Gibbs calculated that Ehnle had 217,800 wormholes per acre on his farm.

The row units were fairly worn, but in 2019, the rig still performs as intended and they added an NH3 Equaply system to it for anhydrous application. They are only anhydrous in the strip, and they are not applying dry fertilizer.

Wenzel acknowledges that concern over a large initial investment in equipment can have farmers second guessing a switch to strip-till. However, he believes that farmers can be thrifty with some careful shopping. “You don’t have to go out and spend $3,000 per row, plus a new bar to get going,” he says. “Our Case IH bar we bought used for around $12,500 and we added the Ag Leader control system.

“I understand to do strip-till properly, there’s concerns about guidance and RTK and there’s an expense there, but you don’t have to go out and get a huge loan to get started with strip-till. Costs associated with guidance and precision can often add up quickly, Wenzel admits, but for him, they’ve been easy to justify because of savings.

It’s OK to Make Mistakes with Cover Crops. Austin, Minn., strip-tiller Tom Cotter recommends that strip-tillers use all of their senses to examine their soil. Look for structure and worms, feel the structure, listen for roots tearing when plants are pulled up from the soil, and pay attention to whether your livestock are eating the cover crops. Being flexible, being able to adapt with the cover crop and not being afraid to make mistakes are key for success when planting covers. 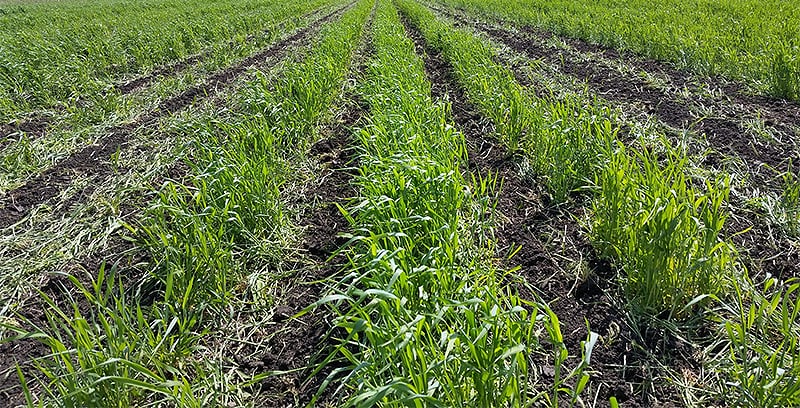 MIX & MATCH. Flexibility is an essential part of making cover crops pay in a strip-till system, says Tom Cotter of Austin, Minn. Experiment early and often to find the right mixes that work with your soils.

Cotter said his covers provided weed suppression right away, and strip-tillers will also see water filtration. “In the winter time, when the snow melts and you get all that ponding, that’s where I get the most out of water filtration,” he adds. “Water holding capacity is the whole principle of covers, and/or no-till or strip-till.”

Simple Math Equals Massive Biological Benefits. Frank Gibbs, former USDA soil scientist and founder of Wetland and Soil Consulting Services (WSCS) in Rawson, Ohio, emphasized the importance of digging into why and how nightcrawlers are “little livestock” that demand a steady diet of biological food to support a strip-tiller’s soil development.

Gibbs took 40 attendees into the field for a post-event demonstration of earthworm activity in a corn field that has been no-tilled for the last 50 years on host Aaron Ehnle’s farm in Edelstein, Ill.

Gibbs highlighted the quantity of middens, or piles of biological material left behind by earthworms, on the soil surface at the demonstration site. “The nightcrawlers pull residue up around their hole to make their own little compost heap,” he explains. “They spit out a slime from their stomach that’s loaded with bacteria, and then they break that cornstalk into fine root hairs which they can eat. The material is then taken underground into the wormholes and coats the sides.”

Gibbs noted that when digging the root pit on Ehnle’s farm to find a section of buried tile, there was a proliferation of corn roots surrounding the tile several feet down into the pit, dotted by numerous wormholes among the roots.

On the surface, Gibbs marked off a 3-square-foot section on the edge of the cornfield and counted 45 middens. Based on the total in that small area, Gibbs figured there are 5 wormholes per square foot. Further calculations based on 43,560 square feet in an acre, Gibbs determined Ehnle had 217,800 holes per acre.

“Those are all probably 6 feet, or at least 4 feet deep, meaning he’s got an underground army helping make his tile function properly,” Gibbs says. “In a wet year like 2019, wouldn’t you rather have holes like that in your soil, versus having it sealed off? That makes a big difference in terms of being able to get that water into the ground, instead of having it run off with your topsoil.”