Keiper’s son, who works for a local co-op, suggested strip-tilling after the first year of no-tilled corn didn’t work out so well.

“When you no-till corn, you don’t get the best stand,” Keiper says. “But with strip-till, I get the best stand of corn ever. And that’s where RTK’s automatic steering is critical. You need to plant on the strip.”

Keiper is a long-time believer in the value of precision technology. Since 1983, he’s worked for Park Farms Computer Systems, owned by Ken Hofer of DeWitt, Iowa. In 1994, Keiper and Hofer traveled to the Illinois farm of no-tiller and strip-tiller Jim Kinsella. At the meeting, Keiper recalls, Ag Leader founder Al Myers described a new tool called a yield monitor.

Then and there, Hofer and Keiper decided to start using a yield monitor, and Keiper has done so ever since.

Keiper uses Ag Leader’s ParaDyme with the Integra monitor, which regulates the application of dry fertilizer and anhydrous when he’s strip-tilling, and he also uses it when he’s planting.

“With single-row shutoff, it saves seeds and improves yields, and that pays every year because the seed isn’t doubling up,” Keiper says. 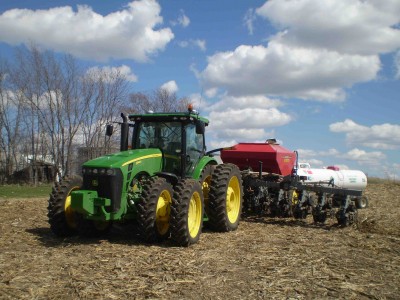 Iowa strip-tiller Jim Keiper relies on the differential correction of RTK to strip-till with a 12-row rig and plant corn with a 16-row planter. (Photo courtesy Jim Keiper)

The 2012 growing season marked the third year Keiper has used RTK with differential correction. Before that, he used Omnistar for 3 years.

“With Omnistar, it’s accurate enough from pass to pass, but over time, the guidance line drifts,” Keiper says. “And that’s a problem with a 12-row strip-till rig and a 16-row corn planter. But with RTK, the planter is always on the strip where you want it to be.”

After harvest in 2009 and 2010, the weather closed in and Keiper couldn’t build strips. In the fall of 2011, Keiper strip-tilled half of his fields and then the rest this spring.

Strip-tilling in the spring has produced surprisingly good results over the past 3 years.

“Spring strip-till gives me a better seedbed and better yields, and I don’t know why,” he says. "Two years ago, I would have told you the exact opposite.”

When strip-tilling in both the fall and the spring, Keiper uses N-Serve to minimize nitrogen loss. He wonders whether the abnormally wet springs during the past few years caused unusual nitrogen losses from fall strip-tilled fields.

“In recent years, we put on N-Serve and then it turned wet, wet, wet,” Keiper says. “Last winter, we didn’t have any of the normal freezing-and-thawing action. This spring, the ground worked the best that is has in all the years I’ve been farming.”

When Keiper strip-tills in the fall and spring, he bands dry fertilizer — phosphate, potash, sulfur and zinc — and knifes in anhydrous ammonia. 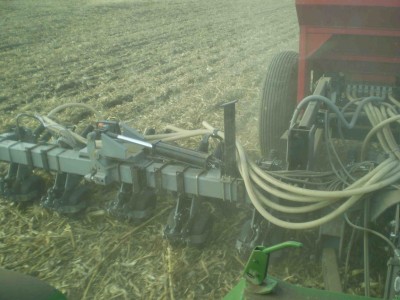 “For me, every year and every acre is a test,” Keiper says. “I will variable-rate the phosphate and potash, using a combination of yield-data maps and soil tests to determine the rate. I apply a full rate, third rate and half rate. I soil test and grid-sample fields.”

At times, Keiper will broadcast fertilizer in fields he strip-tills for corn. For instance, Keiper added more tile to a field in the fall of 2010. After tiling, the co-op came in and broadcast the dry fertilizer — phosphate, potash, sulfur and zinc — and then Keiper chiseled the fertilizer into the soil, as needed, to level out the tile ditches.

“After chiseling the field, I ran over the field lightly with a Turbo-Till to level out the bumpy places where tile was placed.”

Since Keiper’s been using computers on the farm for more than 30 years, and a yield monitor for about 20 years, it’s not surprising to hear how he approaches every growing season.

“I’m a guy who wants every acre to be in test strips, and with the monitors and the combines we have now we can do that,” Keiper says.

This year, he’s participating in a plant-population study being conducted by Pioneer Hi-Bred in several area counties.

“We’ve heard a lot about growing corn yields that average 300 bushels per acre. To do that, I think we’ll need higher seed populations and more fertilizer,” Keiper says. “And I want to see if it’s not only possible to grow 300 bushels per acre, but also if it’s economical, and if higher stands of corn cause more lodging.”

Keiper conducted the tests in two fields of 160 and 180 acres.

“The 8-row strips in the population study are each half a mile long,” he says. “If you’re doing tests, it’s important that it’s not just 300 feet long and that it’s real world.

“Years ago, everybody did tests on their best ground. You need to test hybrids on some of your poorer ground. You may find that a hybrid does well there, but not on your best ground. We have highly variable soils. For example, in a 180-acre field there can be 9 or 10 different soil types.”

“You would need multiple tanks of different hybrids on the planter,” he says. “Right now, we can’t change hybrids quickly enough as the planter goes through the field to adjust hybrids for each of the different soil types.”

The challenge in varying hybrids for soil types is both a machinery issue and a hybrid-response research issue, Keiper says.

“We need to do more research to know which hybrid does well on which soil type,” he says. “That’s what I’m doing with the two different hybrids and the plant-population study this year with Pioneer Hi-Bred. Pioneer will take stand counts, tissue tests and yield results. I’m one of 15 to 20 farmers in Linn and Benton counties who are participating in the study.”

The lower populations — like those in the 20,000s — will produce ears that are 6 inches longer than those at 34,000 to 36,000 seeds per acre, but they may not yield even close to higher populations.

When Keiper built his 12-row strip-till unit, all of the rows had to be moved and taken off. Keiper bought 12 shanks, points, rolling baskets and berm settlers from Hiniker.

The rig makes strips that are about 10 inches wide and 10 inches deep.

“For fall strip-till, I place the anhydrous about 10 inches deep and the dry fertilizer about 7 inches deep,” Keiper says.

The dry-fertilizer tank on the strip-till unit holds 5 to 7 tons of material.

The anhydrous tank and cart hitches to the back of the strip-till rig.

This year, regardless of whether he strip-tilled continuous-corn fields in the fall or in the spring — he applied 30 units of nitrogen with a pre-emergence herbicide, after planting corn on some acres for another test.

“My fertilizer program is basically done when I plant corn, except for the nitrogen that follows in the pre-emergence herbicide,” Keiper says. “I am doing plots of sidedress nitrogen, and some of it just before tasseling, with a Hagie sprayer.”

Keiper has also has done other testing after planting corn, including leaf-tissue analysis and spraying fungicides at V5 with an airplane at the proper time.

In the third year, he moves the rows 12 inches over to the left of the first year’s row. In the fourth year, Keiper returns to the original location.

“If you don’t move over from the previous year’s rows, the rootballs interfere with seed-to-soil contact,” Keiper says. “I use the same tractor — a Deere 8345R — to pull the strip-till rig and to plant corn because of the RTK auto steering.”

Overall, Keiper is pleased with the yield results of strip-tilling continuous corn after years of no-tilling both soybeans and corn.

“My organic matter with no-till and strip-till has really gone up, and with continuous corn you have more residue to break down and build up the soil,” he says.

Keiper has purchased a Case IH True-Tandem Turbo 330 vertical-tillage tool to incorporate into the operation.

“Running a vertical tillage tool over the fields of continuous corn after harvest seems to eliminate corn stalks from plugging up the strip-till rig,” Keiper says. “I don’t want to shred the stalks. I want all of the stalks to stay in place.”