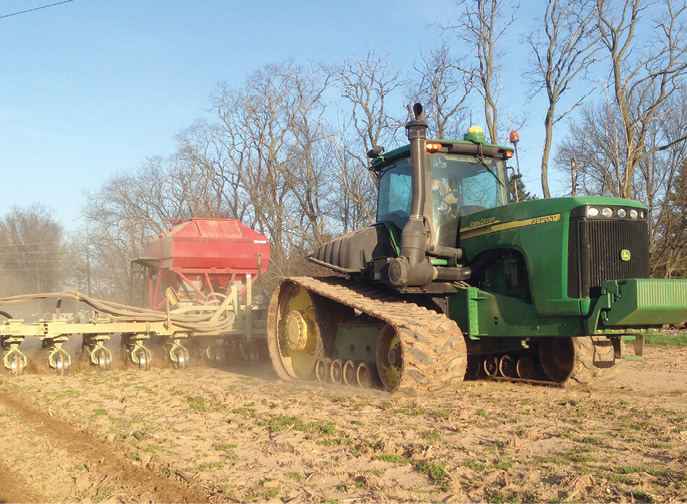 By Jack Zemlicka posted on May 1, 2014 | Posted in Seeding & Planting, Equipment

Switching to 30-inch corn, and experimentation with cover crops and strip-tilled soybeans, is showing a promising payback for Indiana strip-tiller Jason Wykoff.

With the majority of their acres dedicated to seed corn, a crop that requires intense management, strip-tiller Jason Wykoff and his wife, Gretchan, can’t afford to waste time and money on unnecessary field passes.

For years, poor water infiltration and soil erosion proved to be regular challenges, especially on their seed corn acres, which make up 80% of their 4,500-acre operation in New Carlisle, Ind.

“Seed-corn management is a different animal,” Wykoff says. “We’re making numerous applications throughout the growing season that often adds up to 15 passes in a year, which can lead to severe rutting, especially from the sprayer and detasseler.”

For years, three or four of those trips through the field were conventional-tillage passes, ripping up the soil in fall and then finishing it in the spring.

“Some fields would just be lakes after a hard rain during the spring,” he says. “They were essentially bare, and even on flat fields the soil just moved around because there was nothing to hold it in place.”

With seed corn, they would sometimes have to replant a delayed male or female hybrid, then fertilize the field that had been freshly tilled. If it was wet, they would have to wait an extra day or two.

As they added acres and became more spread out across three counties, the window for planting and fertilizing crops decreased. Building a consistent seedbed also became a challenge, which in turn hurt crop emergence and yields because they couldn’t perform field operations in a…