By Clair Urbain posted on May 6, 2016 | Posted in Precision Agriculture 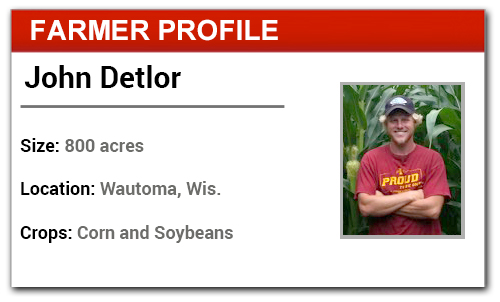 John Detlor continues to slowly adopt precision farming technology into his 800-acre operation that he operates with his brother, James, near Wautoma, Wis. As he does, he’s finding dealer support is key to a successful transition.

Detlor conventional-tills 600 acres of his corn and soybeans and is experimenting with strip-tilled corn with his 6-row custom-built strip-till rig that he runs in the spring, applying a mix of ammonium sulfate, liquid nitrogen (N), potash, sulfur and urea.

He applies additional N at planting and as a sidedress application. About half of his acres are irrigated, but he applies straight rates of fertilizer across his fields.

Two years ago, Detlor installed a Trimble 750 FMX unit to control seeding population and for automatic row shut-off on his John Deere 7000 planter that has been upgraded with Kinze air clutches, air lift bags and double-disc openers for liquid fertilizer application. He has three pre-set seeding populations that he changes on-the-go in the cab as he passes in and out of irrigated land.

“We use a WAAS signal for guidance,” he says. Because the tractor is a late 1980s Case IH 2590, he doesn’t have auto-steer and resets the A-B line every time he starts working in the field. “I still use my markers and steer manually,” he says.

An engineer by training, Detlor wasn’t afraid to tackle installing the precision systems on his planter, but he was frustrated by the lack of responsiveness his dealer offered when he needed to finalize the system setup.

“It was hard to get him here to finish the installation,” he says. “It was a busy time of year, but when you spend that kind of money on a system, the dealer should be prepared to to support the equipment they sell.”

Since then, Detlor has had only one problem with the unit — a seed monitor module went out — but the system diagnostics was very good about alerting him to the problem and helping him pinpoint the solution. It turns out the fertilizer driveshaft ripped out a wire that was installed too close to it and had to be repaired and rerouted.

“I’ve also had the dealer look at my system remotely when I had a question about its operation and that was very helpful,” he says.

Future plans include installing a yield monitor in the combine, upgrading to an RTK signal for guidance and tractor auto-steer.

“Right now, resetting the A-B line to the marker line means I have to go back in the screen menus,” Detlor says. “I would like it better if the A-B line could be reset from the front screen.”

Technical Competency a Must to Support Precision Sales