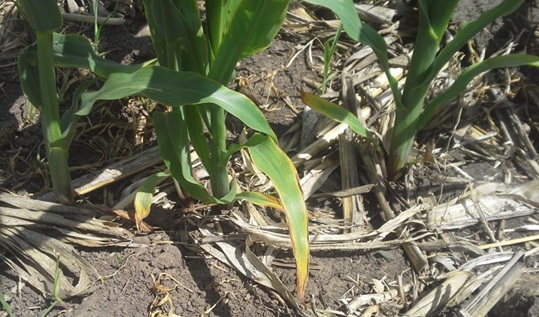 Observations of corn with necrosis (yellowing) of lower leaf margins were reported in northeast S.D.. After investigating the field areas and reviewing soil and plant tissue analyses, potassium (K) deficiency was identified as the cause (see photo above). However, some of these fields had adequate fall and spring soil test potassium levels.

Two of the fields were recently resampled and analyzed for potassium, and their potassium levels dropped drastically when compared to previous samples from the same field (Table 1). One would ask, how could this happen?

When the soil is moist or wet, it swells due to water in between these clay particle layers. When the soil dries, these clay layers shrink and the soil visually cracks. During extreme soil drying, the shrinking clay layers actually trap the cations, which become unavailable for plant roots to take up.

Al Huer, South Dakota State University Northeast Research Farm manager near South Shore, reported that while April’s precipitation was 0.30 inches above normal, May (1.45 inches) and June (0.42 inches) precipitation totals were only 35% of normal.

Foliar application of K can be problematic because when drought conditions occur, the plant leaf stomates (openings) tend to close for moisture conservation. Further, leaf surfaces are waxy and are not intended for large nutrient absorption, which is the function of the roots. Broadcast applications of K in large corn could cause plant damage due to fertilizer going down the leaf whorls. Potassium fertilizer rescue applications have been shown to work in research plots when soil moisture was adequate.

When limited soil moisture conditions occur, the worst of everything is brought out in a crop, including nutrient deficiency symptoms such as K.

Corn Response to Potassium And Tillage Across Variable Soils

How Drought Affects Corn at Each Growth Stage