Spider mite damage to corn and soybeans is being reported in Nebraska. The following story addresses management. The companion story, Identifying Spider Mite Damage and the Species Responsible, includes a guide for distinguishing Banks grass mites, found in grass crops, and twospotted spider mites, found in soybean and grass crops.

Several species of insects and mites prey on spider mites. These predatory insects and mites play a major role in suppressing spider mites in most years. Many spider mite problems in corn and soybeans may be traced back to an earlier application of a broad spectrum insecticide that reduced populations of these natural controls. The most important of these include a predatory spider mite, the mite destroyer beetle, six-spotted thrips, and the minute pirate bug. In addition to these predators, a fungal disease also may be important in reducing spider mite populations.

Most pyrethroid and organophosphate insecticides used in corn and soybeans have severe, detrimental effects on spider mite predators. Additionally, pesticides differ a great deal in their effects on BGM and TSM. Some cause little mortality of either species, while others are somewhat toxic to BGM. Fewer are toxic to TSM.

Thus, great care should be taken to evaluate the benefits of an insecticide application before any material is applied for insect control in a field that also has spider mites. Even small numbers of mites can rapidly increase to damaging levels when conditions are favorable. In many cases, it is an earlier treatment for western bean cutworms or corn rootworm beetles that leads to a later spider mite problem in corn. 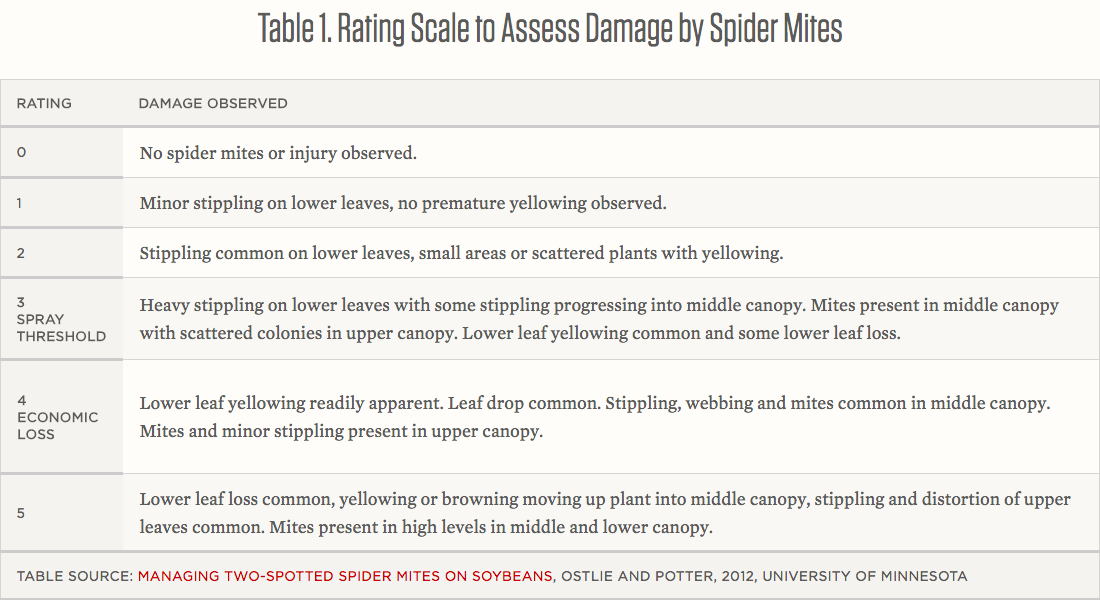 If a decision is made to treat an insect pest in a field that also has spider mites, the choice of products becomes very important. Because TSM and BGM differ in their susceptibility to various pesticides, it is important to determine which species is present.

Spider mites (particularly TSM) are noted for their ability to develop resistance to chemicals that were once toxic to them. For this reason, it is very likely that some products now toxic to spider mites will become less toxic in the future.

According to Colorado State University, in corn “treat if damage is visible in the lower third of the plant, and mite colonies are present in the middle third. Once the crop has reached the hard-dough stage, no economic benefit will result from the treatment.”

No research has been conducted that would allow calculation of an economic injury level for twospotted spider mites on soybeans. On soybeans, the following scale is suggested to assess damage by spider mites:

Damage from mites may be confused with that caused by drought and several foliar diseases, so be sure to base treatment decisions on the presence of mites, rather than just apparent injury symptoms. Fields may be spot treated if the infestation is localized, but check other areas for mites (especially downwind of infestation) and extend treatments into these areas if large numbers of mites are found. Although late-season infestations may accelerate soybean senescence and increase pod shattering, caution should be used in deciding to treat with pesticides because many of the pesticides used for mite control have 21-28 day preharvest intervals.

Spider mite control can be tricky. 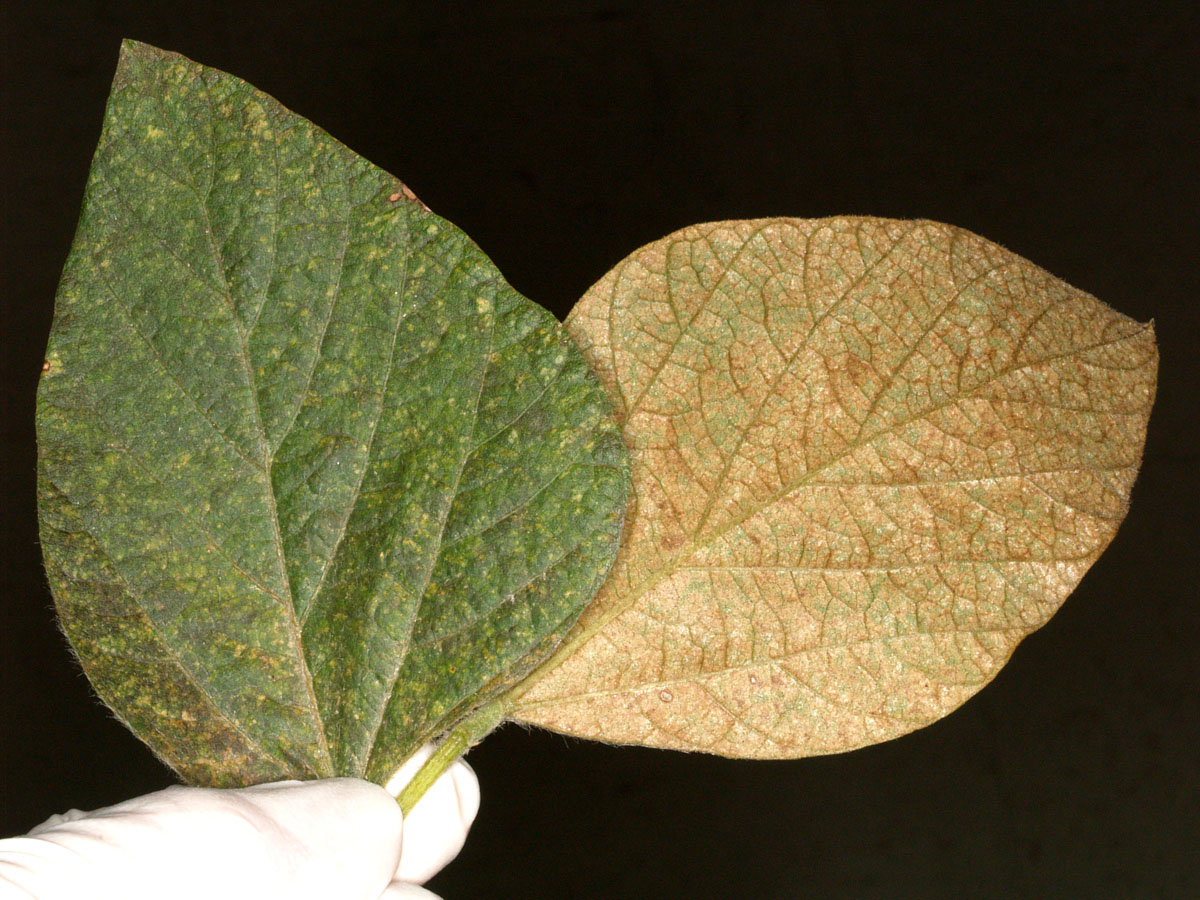 For effective control, spider mites must come into contact with the miticide. Since mites are found primarily on the underside of the leaves, they are difficult to reach with low volume applications. Using three or more gallons of water per acre by air to carry miticides may increase effectiveness. Aerial applications are generally more effective if applied very early in the morning or in the late evening. Applications made at these times avoid the upward movement of sprays, away from the plants, on hot rising air.

Eggs are difficult to kill with pyrethroid or organophosphate miticides, so reinfestation is likely to occur seven to 10 days after treatment as a result of egg hatching. The reinfestation is frequently heavy because natural enemies have been reduced or eliminated. A second application may be necessary to kill newly hatched mites before they mature and deposit more eggs.

Miticides with activity against eggs and immature stages include Zeal, Oberon, and Onager.

In many cases, especially with the twospotted spider mite, slowing the rate of population increase is all that can be accomplished with a miticide application.

Mode of action class 1B; organophosphate

Mode of action class 3A; pyrethroid

Mode of action class 10B

Watch For Mites In Dry Weather

Narrower Yet! Developments In Ultra-Narrow-Row Corn