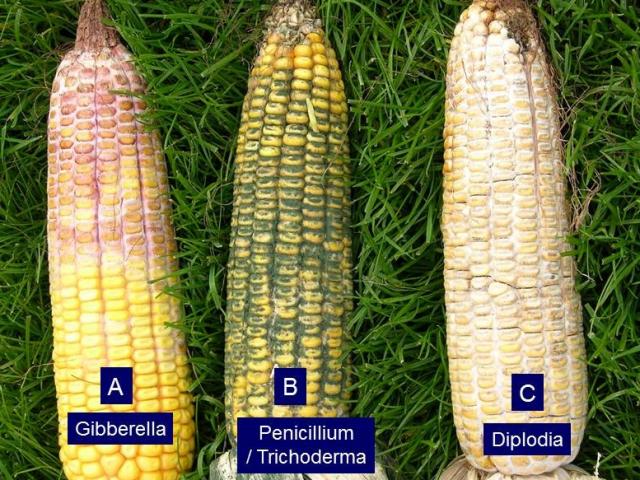 A few weeks ago, we published a newsletter article addressing concerns related to Diplodia ear rot of corn. We have since received samples with at least three other ear rots: Trichoderma, Fusarium and Gibberella. Of these, Trichoderma ear rot seems to be the most prevalent and severe.

Ear rots differ from each other in terms of the damage they cause (their symptoms), the toxins they produce, and the specific conditions under which they develop. So a good way to determine whether you do have a major ear rot problem this year is to quantify the disease in your field and get suspect samples tested for mycotoxins. And the best way to tell the difference among the ear rots is to know the types of symptoms they produce.

Abundant thick greenish mold growing on and between the kernels make Trichoderma ear rot very easy to distinguish from Diplodia, Fusarium and Gibberella ear rots. However, other greenish ear rots such as Cladosporium, Penicillium and Aspergillus may sometimes be mistaken for Trichoderma ear rot. Like several of the other ear rots, diseased ears are commonly associated with bird, insect or other types of damage. Another characteristic feature of Trichoderma ear rots is sprouting (premature germination of the grain on the ear in the field). Although some species of Trichoderma may produce mycotoxins, these toxins are usually not found in Trichoderma-affected ears under our growing conditions.

Diplodia causes a thick white mass of mold to grow on the ear, usually initiating from the base of the ear and growing toward the tip. Eventually the white mold changes to a grayish-brown growth and infected kernels appear glued to the husk. Infected ears are usually lightweight and of poor nutritional value. When infections occur early, the entire ear may become moldy. When infections occur late, only a fine web of fungal growth appears on and between the kernels. See my previous article for more on Diplodia ear rot.

When natural early season infections occur via the silk, Gibberella ear rot typically develops as white to pink mold covering the ear tip to the upper half of the ear. However, infections may also occur at the base of the ear, causing the whitish-pink diseased kernels to develop from the base of the ear upwards. This is particularly true if ears dry down in an upright position and it rains during the weeks leading up to harvest. The Gibberella ear rot fungus may also infect via wounds made by birds or insects, which leads to the mold developing wherever the damage occurs. When severe, Gibberella ear rot is a major concern because the fungus produces several mycotoxins, including deoxynivalenol (vomitoxin), that are harmful to livestock. Once the ear is infected by the fungus, these mycotoxins may be present even if no visual symptoms of the disease are detected. Hogs are particularly sensitive to vomitoxin. Therefore the FDA advisory level for vomitoxin in corn to be fed to hogs is 5 ppm and this is not to exceed 20% of the diet.

Fusarium ear rot is especially common in fields with bird or insect damage to the ears. Affected ears usually have infected kernels scattered over the ear among healthy looking kernels or are confined to kernels that are damaged. The fungus appears as a white mold and infected kernels sometimes develop a brown discoloration with light colored streaks. Several different Fusarium species are involved with Fusarium ear rot. One common species produces a toxin called Fumonisin. Horses are particularly sensitive to Fumonisin, but cattle and sheep are relatively insensitive.

Quantifying Ear Rots in the Field

Estimate the level of ear rot damage in your field by counting the number of ears with symptoms (incidence) or determining the percent area of the ear affected (severity).

1. Walk down the row of corn, peel back the husk and examine every fifth ear for a total of 50 ears, keeping a count of the number of moldy ears as you go. Keep a separate count for each ear rot.

2. Divide the number of positive ears (with symptoms of the particular ear rot) by 50 and then multiply by 100 to estimate percent incidence.

3. Repeat steps 1 and 2 at multiple locations (5-10, depending on the size of the field) spread out across the field and then take the average to get an estimate for the field.

Note: If you suspect that the problem may be more severe in a certain section of the field, you may want to repeat steps 1, 2 and 3, examining every third ear for a total of 50 ears.

1. Completely remove the husk and examine the full length of each of the 50 ears (including those without visual symptoms) to estimate what percentage of the ear is covered with the mold.

2. Using the rating scale below, estimate percent severity for each ear and then take the average across all ears examined. For instance, if you examine 50 ear in a given row, add up the percentages and then divide by 50 to estimate the average severity for that row.

3. Repeat steps 1 and 2 at multiple locations (5-10, depending on the size of the field) spread out across the field and then take the average to get an estimate for the field. 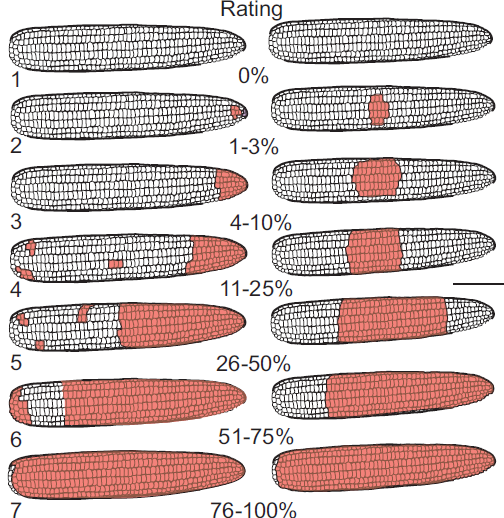 Get Samples Tested for Mycotoxins

How To Tell Corn Ear Rots Apart And Know Their Risk