By Clair Urbain posted on February 7, 2017 | Posted in Precision Agriculture 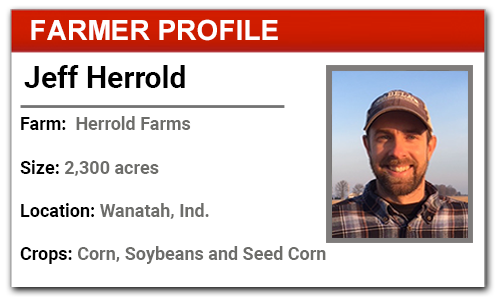 Jeff Herrold farms with his brother, Paul, on Herrold Farms near Wanatah, Ind. While they are no strangers to precision farming practices, Jeff says he certainly would like to leverage the data they have collected to better manage inputs and improve yields.

The brothers farm 2,300 acres of strip-tilled corn and no-tilled soybeans in the northwest corner of the state, with 75% of their operation under center pivot irrigation.

On corn-on-corn acres, they make a fall vertical tillage pass with a 25 foot Kuhn Krause Excelerator and soybean fields are seeded with a cover crop in the fall, usually cereal rye.

The new planter setup will allow them to variable-rate seed, especially important when planting male rows for the seed corn. They use an Ag Leader Integra for steering and fertilizer rate control, along with a 20/20 monitor to control seeding rates that follows an RTK signal.

“However, we use a WAAS signal for auto-steering and rate control on our self-propelled sprayer,” Herrold says. “Once we get the A-B lines set up, we can hit the strips right on most of the time.” For sidedressing, they will move the vApply HD control from the planter to their sidedress bar and use it to variable-rate liquid fertilizer

They also plant seed corn, which requires some special adjustments so the outside planter row can double back over that row to seed male rows.

They use the 20/20 monitor with their application bar to variable-rate 28% nitrogen (N). “It’s much more reliable than the Redball monitors we were using,” Herrold says. “We found the true rate applied depended on hose length with the old unit. It really affected application rate. The new system will accurately control variable-rate N application to the row.”

In the fall, they have an Ag Leader YieldSense yield monitor installed in their Case IH 2188  combine, which allows them to track yield by variety.

Herrold prefers using Ag Leader’s SMS software to analyze yield data and build variable-rate seeding and N application rates. “It seems more straightforward and I can usually figure out how to do things, but I’ve also found their online and phone support to be very good,” he says.

Herrold still believes he has room for improvement when it comes to filtering the data and building field zones and prescriptive rates. One thing on his wish list is more data management training opportunities from his dealership.

“They offer maybe one or two a year, and it’s easy to miss them,” he says. “I feel like I have to be the expert and have to know everything. In the past, I’ve tended to have more success contacting the supplier directly for online support than my dealer, but I’d rather have them be my go-to for data training.”