By Clair Urbain posted on April 10, 2017 | Posted in Precision Agriculture 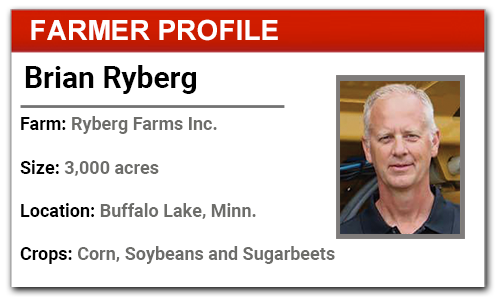 Brian Ryberg, who farms with his wife, Sandy, near Buffalo Lake, Minn., has been on the bleeding edge of precision farming since the 1990s when he first started using a yield monitor in his combine.

“Back when I was farming with my father, he couldn’t see why I would spend so much on auto-steering,” recalls Ryberg. “Until one day when the system quit working while he was doing field work and he refused to do any more tillage until the system was fixed.”

Today, Ryberg strip-tills all of his crops and also does custom strip-tillage. After switching to strip-tillage in 2015, he was able to sell off a 4-wheel-drive tractor, field cultivator and disc ripper.

He relies on an RTK signal to guide his equipment, using a John Deere StarFire 3000 receiver and a GreenStar 2630 controller. The strip-till pass is made with a 24-row SoilWarrior from Environmental Tillage Systems, with two fertilizer bins to variable-rate apply primarily phosphorous and potassium.

“We are looking to apply nitrogen only in the spring to minimize loss,” Ryberg says.

He plants with a 36-row Deere DB66 set up with Precision Planting’s eSet seed meters and air-powered CleanSweep row cleaners for corn and soybeans. He also uses an older Deere 24-row 7300 planter for sugarbeets. A 20/20 SeedSense unit controls rate, down pressure and row shut-off.

The planters are capable of variable-rate seeding and Ryberg will be experimenting with it, however, the soil types across the acres he farms are fairly consistent and he’s not sure if he can achieve a yield boost from the practice.

Ryberg has had good luck with his precision systems — however, he’s feeling a bit cramped in the cab.

“We have the 2630 monitor for steering, the 20/20 unit to control the planter, an interface with an iPad for FieldView, a CleanSweep controller, a rear-view camera monitor and a cell phone holder in the cab. It’s pretty crowded,” he says.

Ryberg wanted to tie the SeedSense and 2630 units together, so he invested in a patch cable that was supposed to allow the units to communicate with each other. “But there was some sort of glitch in getting them to communicate.

Ryberg was able to get the problem solved, but would still prefer a more streamlined system and universally compatible components in his tractor cab. Still, he has found other applications for the 2630 monitor and RTK guidance.

In the field, he uses the system to note location of rocks that need to be picked up and it also makes finding the seed trailer in large fields simple.

“We also use it to plot elevation so we can run drain tile. We even used it to set the foundation of our new machine shed. It worked very well to establish grade,” he says.

“We are so accurate, we don’t even think about using row markers,” he says. “The auto-steer function also helps when we’re spraying. With a 132-foot boom, the swath control dramatically reduced overlap.”

Budgeting for Change & Creativity with a Cost-Effective Strip-Till System