How Much Nitrogen is Gone?

The heavy rains of late April and early May have paused and the weather has warmed enough to allow corn and soybean planting (or replanting) to resume in Illinois, except in the low spots in some places.

With a lot of nitrogen fertilizer applied early, and with rainfall totaling 5 inches or more over most of the state in the two weeks before May 10, many people are worried about N loss and the possible need to apply more nitrogen than planned.

Although we wish the weather had stayed warm, the return of cooler weather along with the rainfall did slow nitrification – the conversion of ammonium to nitrate – slightly, and also slowed the denitrification process.

Soils with standing water warm slowly, which has limited denitrification. According to the Illinois Climate Network of the Illinois State Water Survey, soil temperature 4 at inches under bare soil at Bondville, west of Champaign, was less than 60 degrees between April 27 and May 8, which was during the wettest stretch of weather.

Soil temperature is now above 70 at that location, and where water is still standing, denitrification is underway. In many such areas, it will be some time before a crop can be planted, and adjustments to fertilizer N may be in order if and when the crop can be established.

Ammonium moves little in the soil, so nitrification is required to mobilize nitrogen. We know from our N-tracking research, which is funded by NREC using fertilizer checkoff dollars, that N applied last fall was about 70% nitrate by early May, and that ammonia applied in March or April was more than half nitrate when the weather turned wet. 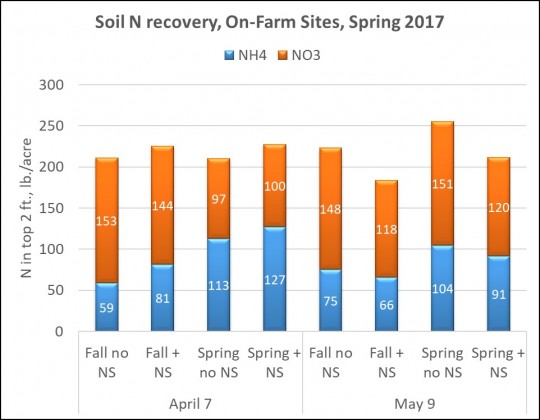 Figure 1. Soil nitrate and ammonium recovered from the top 2 ft. of soil following application of 200 lb. of N as anhydrous ammonia with and without N-Serve (NS) in the fall of 2016 or in March, 2017. Data are averages over 3 on-farm sites in central Illinois.

Soil samples taken from the same fields before and after the heaviest rainfall period do not show large decreases in N in the top 2 feet of soil.

In one set of three on-farm N-tracking trials in central Illinois, samples taken in mid-April and again on May 9 following either fall or March anhydrous ammonia application with and without N-Serve show no change in soil N over that period, regardless of when N was applied (Figure 1). What looks like effects of N-Serve comes from sampling variability.

We found very similar results at three Crop Sciences Research & Education centers (Figure 2). In the on-REC trials, we applied spring N in April instead of March, which explains why spring-applied N showed less conversion to nitrate. But in both sets of trials, the amount of N recovered after the high rainfall in late April and early May was within a few pounds of that recovered in mid-April.

Finding no change in soil N doesn’t mean there was no movement out of the top 2 feet of soil, it only means that the amount of N that moved out was about the same amount as was produced by mineralization of soil organic N during this period. We saw some large increases in soil N as the soil warmed in May in 2016.

We have seen some other numbers that show more disappearance of N from the top 2 feet of soil than I’m reporting here. This could be part field location – we do the on-farm and on-REC trials in parts of fields that don’t flood, and that could mean less N movement or loss. On the other hand, N movement down through the soil may be greater in higher positions in the landscape if soils there are somewhat better-drained.

Soil drainage characteristics are an important factor in movement of water and nitrate. Soil texture is a critical component of drainage, but field tiles change the relationship between texture and water movement. As an example, a typical Drummer silty clay loam in eastern Illinois allows hardly any water to move through it unless it’s tile-drained.

Do We Adjust Nitrogen? 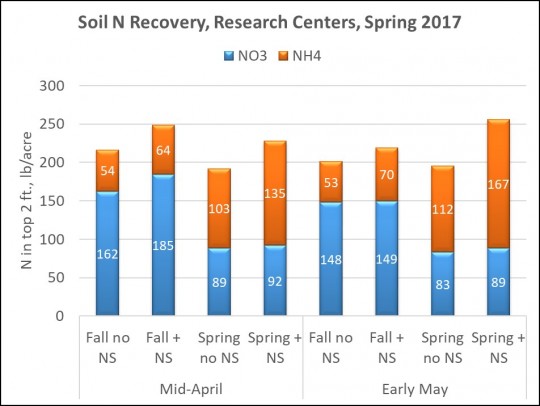 Figure 2. Soil nitrate and ammonium recovered from the top 2 ft. of soil following application of 200 lb. of N as anhydrous ammonia with and without N-Serve (NS) in the fall of 2016 or in April, 2017. Data are averages over trials at Monmouth, Urbana, and Perry, Illinois.

While it seems likely that some N has moved out of the upper soil as a result of rainfall before crop N uptake began, it is premature to conclude that we need to apply more N than we had planned to apply.

If soils dry out and rainfall returns to normal, root extraction will resume once plants are larger, and this can help draw water towards the surface, bringing N with it, including some N that moved below 2 feet but not out in tile drainage.

As soils dry and warm, mineralization will kick into high gear. Last year, under good temperatures and without unusually heavy rainfall, we saw mineralization provide as much as 150 lb. of N per acre or more to the crop.

One indication that the topsoil has not been stripped clean of nitrogen is the good recovery of green leaf color that we’re seeing as the soil dries out.

Most fields are not as dark green as we saw at this point in 2016, but as the root system starts to expand and as soils continue to warm, this will change. The corn crop at this point looks like it does not because of lack of N, but due to temperature and rainfall and their effects on soil conditions that affect crop growth and early development.

While it’s premature to revise N management based on what has happened so far, we can’t rule out the possibility that the crop may need more N than it might have needed with drier spring weather.

The good news is that we still have time to make such decisions: the crop takes up barely one pound of N per acre for every inch of growth it makes up to knee-high or so. As long as soils conditions remain favorable, a crop provided with normal amounts of fertilizer N almost never runs out of N during vegetative development, at least to the extent that we can see it. This year will be no exception.

We are sampling soils about every two weeks up to tasseling, and I’ll keep you updated with what we find. But because we have not seen this sort of weather event at this time of the season in recent years, we don’t have a good way to relate soil N at a specific crop growth stage to (future) plant need.

Nitrogen deficiency develops over time, and is almost always more related to current soil moisture than to the amount of soil N. So if soils do not get extra wet or extra dry over the next month, this season could turn out to be much more typical than we think expect.

Some of you may recall my reporting that we’ve had some hints that short-term deficiency during early vegetative development might lower yield potential slightly, even if overall the N amount used is adequate and plants never show deficiency.

If soils stay warm this is likely to be a non-issue, but if you have the ability to apply some N with the planter or otherwise close to the seed that might be a useful strategy. As soils continue to warm, the likely advantage of this is decreasing as planting is delayed in places.

How Much 'N' is Left, and is More Starter Needed?

How Much Fertilizer Will Move Soil Test Levels?