More erratic precipitation patterns and shifting seasons are reinforcing the value of a comprehensive strip-till plan for improving soil health.

Rain and temperature data over the last 50 years show that there has already been a significant shift in weather patterns, which have influenced no-tillers’ cropping systems. While scientists are far from understanding the phenomenon and what it means, Hatfield offers some interesting how-to advice on managing the evolving weather patterns.

He says it will require some unconventional thinking and with it, controversy.

“These are very wicked, complex problems,” he says. “It will take a combination of factoring nutrient, water and light-capture efficiencies and how they come together to address changing weather patterns and how they affect soil, water, yield and profitability.”

Fifty-year weather data shows some interesting, if not alarming trends. USDA’s  National Agricultural Statistics Service (NASS) data indicates that state yield levels are slowly increasing, but from year-to-year, variances show up that primarily come from wild swings in the weather.

“Corn, soybeans, sweet corn and potato yields across the upper Midwest show bumps and wiggles on yield charts, primarily due to the weather, “Hatfield says.

Those variations in the weather fall into 2 categories: 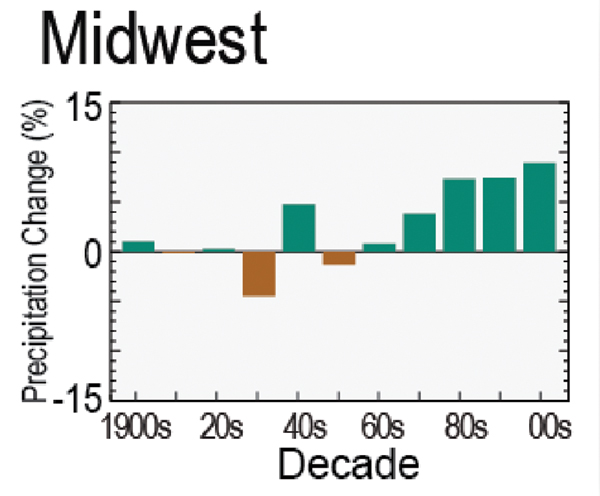 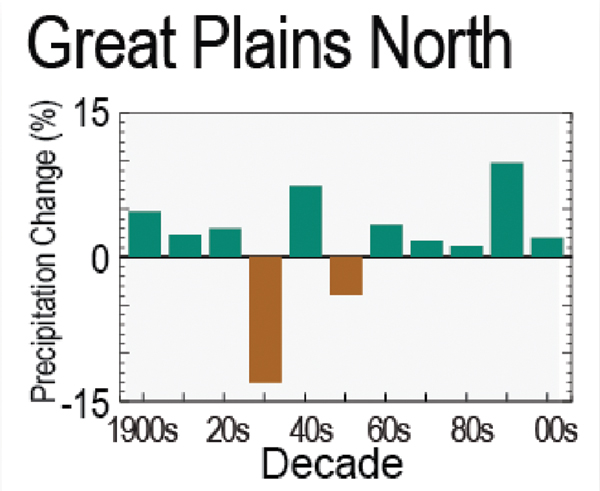 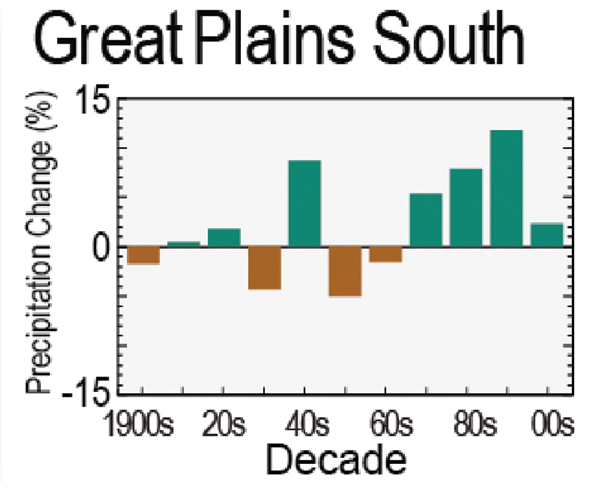 Continuing research by Hatfield shows that healthy soils can help manage these increasingly wild weather swings. “If we can control water with irrigation, soil quality is less important,” he says.

However, farmers relying on Mother Nature should strive to improve soil condition so it can withstand heavy rainfall events as well as provide water storage for prolonged dry periods.

Hatfield cites yield gaps — the difference between potential and actual yields — that occur in field tests across several Midwest counties due to crop stress.

“What causes us from attaining the potential that we have when we buy that bag of seed?” he says. “What we find when we start looking at these yield gaps is that 20% of our yield loss is occurring about 80% of the time and it's due to short-term stresses.

“It really begins to nickel and dime us all the way, and we understand that 20% of that yield loss is well within our capacity to manage. We can improve that water availability into that crop, make much more of that available back into that system. I can't prevent a drought, but I can really begin to think about how we manage our system to make use of every bit of rain drops that fall out there.”

While today’s conservation tillage practices are better than the intensive tillage systems of a generation ago, Hatfield says there is a long way to go. Many crop stress problems from early spring rainfall point directly to soil health.

“Excessive moisture is our number one limitation to crop productivity early in the spring,” he says. “With conventional cropping practices, we basically have made it so oxygen and CO2 can't be exchanged. We are limiting the capability of that root system because it has a lack of oxygen.”

Hatfield compares soil compaction and surface crusting to chronic obstructive pulmonary disease (COPD) in humans. “COPD sufferers have a hard time breathing, and that's the way it is with conventionally tilled soils. They are limited in terms of the oxygen, which limits the root’s ability to take up water and nutrients.” 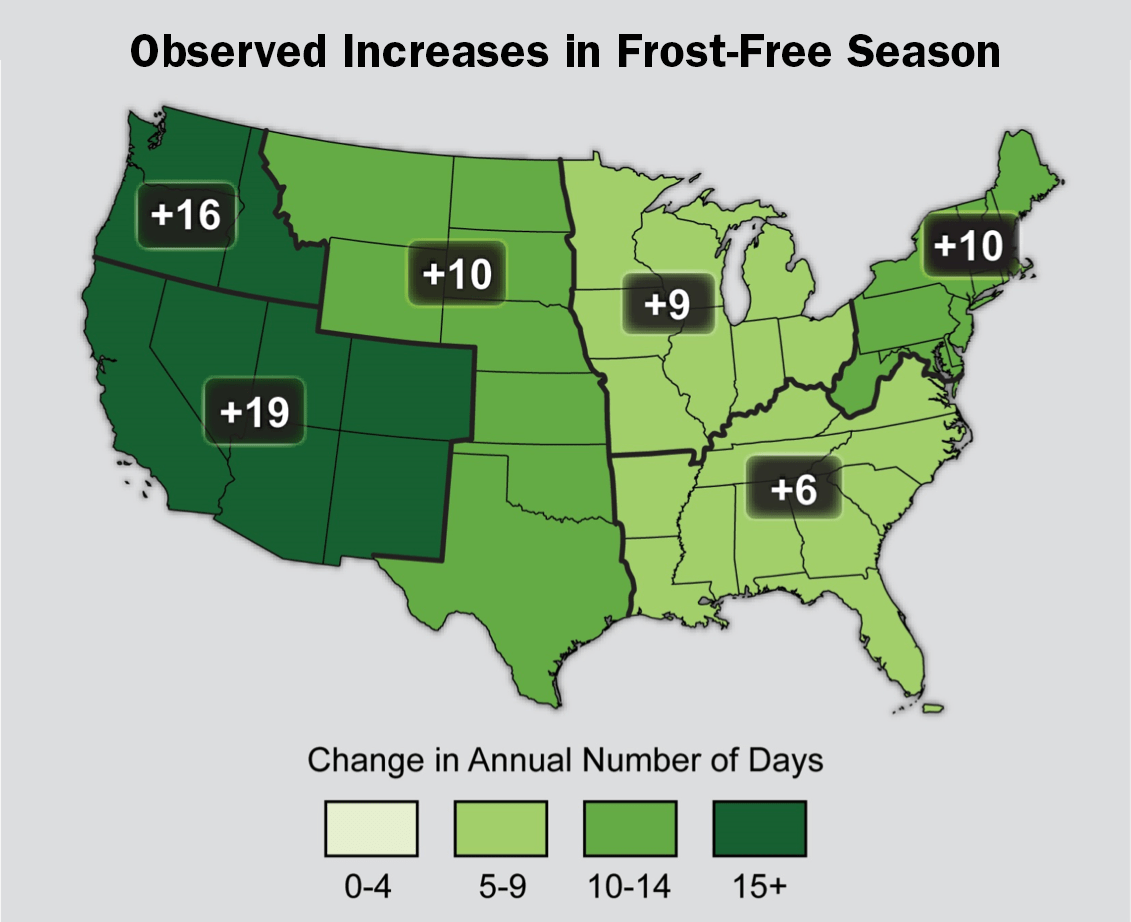 HEATING UP. The number of frost-free days is increasing, as is the number of night-time temperatures above 75 degrees. In yield tests, research indicates an 8 degree increase in night temperature can reduce corn yields by 85%.
Source: National Laboratory for Agriculture and the Environment (NLAE)

The first step in a tiered approach to improving soil health is to restore biological activity. “You can’t till your way to soil health,” Hatfield says. “The biological elements in the soil need food, air, water and shelter to survive and thrive. It’s an invisible process that produces visible outcomes.      As the biology of soil comes alive, farmers will see improving soil structure, darker soils and increased aggregate stability which will result in more late-season moisture available,” he says.

Crop residue is the first line of defense for soil biology. It reduces the impact of rainfall, helps increase water infiltration and helps stabilize the biome.

The Biological Elephant in the Room

Jerry Hatfield, laboratory director at the USDA National Laboratory for Agriculture and the Environment says bio-diverse, healthy soils have 10,000 pounds of biological material per acre below the soil surface.

Every acre of healthy soils will have the equivalent of two African elephants beneath the surface,” he says. “Imagine 320 elephants grazing across a 160-acre field working for you to improve soil health.”

But there is another part of that analogy. Hatfield explains what it takes to feed those elephants — roughly 500 pounds of food per elephant every day.

“The biological components in soil eat residue and even each other. It’s the wild, wild west under there,” he says. “Any practice that promotes increasing bacteria growth will help increase organic matter in the soil. So if you've got residue build up with corn, it's indicative of the fact that we haven't restored the biology within that profile because they'll digest it all.”

“In Iowa, fields with dark, bare soils before the corn completely covers the ground in May and early June can reach 120 degrees,” Hatfield says.  “At two inches into the soil, temperatures can exceed 105 degrees. Proteins in the soil are denatured at 104 degrees. Without residue, we are literally cooking the soil biology.”

Residue cover, however, will drop soil temperature into the 80-degree range, which is perfect for biological activity, Hatfield says. That residue also absorbs energy from falling rain.

Increasing the biome activity in the soil has beneficial effects on nitrogen (N), phosphorus (P), potassium (K) and micronutrient availability. This is prevalent in no-till production systems that can routinely produce anywhere from 250-260 bushels of corn per acre and have an active biome will consume the residue.

“By the end of June and the first part of July, no-tillers have a hard time finding residue,” Hatfield says. “If there is a residue build up with corn, it means the biology within that profile hasn’t been fully restored because it will digest it all.” 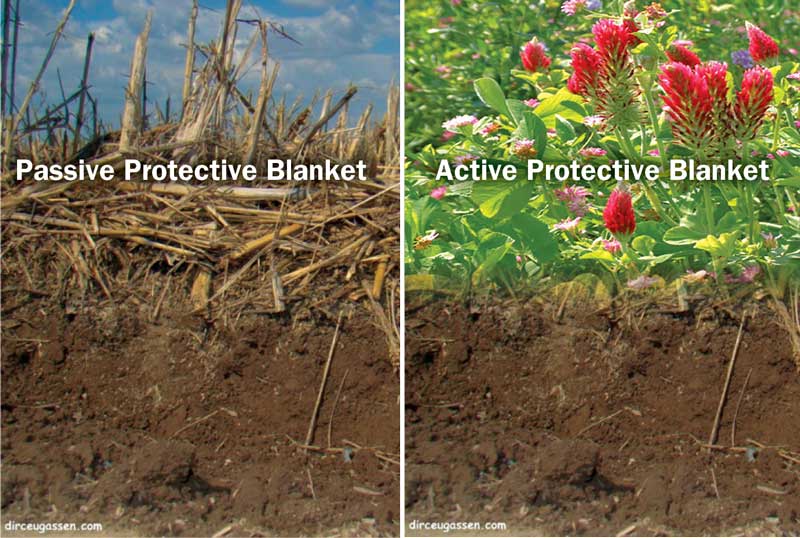 ACTIVE APPROACH. Adding cover crops into the crop rotation has tremendous effects on the soil’s biological activity, providing a living coverage of the soil vs. decomposing crop residue.
Source: USDA

The following year, the researchers planted soybeans and in the no cover crop zone the plants yellowed somewhat. “That trial didn't have the biological activity that is going on in the other trials,” Hatfield says. “The cover-crop cocktail soybeans were much greener and had much bigger leaves. Where's this biology coming from? What are the dynamics?”

The research shows Midwest soil biology can change quickly, but it takes longer to heal. “There is tremendous variation across our 320-acre test field and we’ve had to go back to how the field was managed in the ’60s to determine the patterns that we were observing,” Hatfield says. “One of our challenges will be how do we maintain that crop residue, and it does slow down in terms of decomposition as we go north. But it's not an insurmountable thing. No-tillers are a living testimony of that on their farms.”

Organic matter can play a huge role in preventing drought stress. Hatfield says long-term studies show that the more organic matter in the soil, the higher water-holding capacity, no matter the soil type.

The probability of it raining in the Midwest every once every 8 days vs. once every 13 days is almost 100%, according to climatological analysis.“Across the Midwest, the data says that it will probably rain every three days, although that may be changing,” Hatfield says. “The point is, the more you can keep a crop stress-free, you have a greater chance to reach full yield.”

With changing precipitation patterns, years that were considered abnormal have really become more normal, Hatfield says. To offset variations of heavy rainfall events and extended dry periods, the soil must be able to absorb several inches in a short time period and store it so it is available in dryer periods.

Hatfield and his associates have been working on a concept they named the G x E x M complex; the G stands for genetics; E stands for environment and M stands for management. He further broadens the definition of genetics to cover not just hybrid or variety selection, but also crop selection.

“Management is what you oversee. That's the decisions that you make, because the environment is what we're trying to overcome because genetics is what you're trying to optimize,” he says. “How can we manage the impacts of an extremely variable weather and soil variation within that field? To get the most out of every planted seed, start thinking differently and asking different questions about your farming system and how these pieces begin to fit together.”

Research at USDA National Laboratory for Agriculture and the Environment has produced some controversial results that recommended farmers in the southern two tiers of counties of Iowa would be better off if they switched from corn and soybean production and moved into grass with cow-calf operations.

While the recommendation may have been a bit extreme, Jerry Hatfield, laboratory director at the USDA National Laboratory for Agriculture and the Environment, says there is merit to thinking about how livestock can play a part in building soil health.

“We’re seeing that livestock changes the biology within the soil, even differently than spreading manure,” he says. “The soil has all these different biological pieces that interface with one another and we need to start thinking differently about what’s below the soil surface and how do we put systems to work in it.”

“There's something about fresh manure and urine from an animal operation that seems to spike that system,” he says. “We have gone in and looked at what the dynamics are underneath that cow pie versus between the cow pie and they are entirely different.”