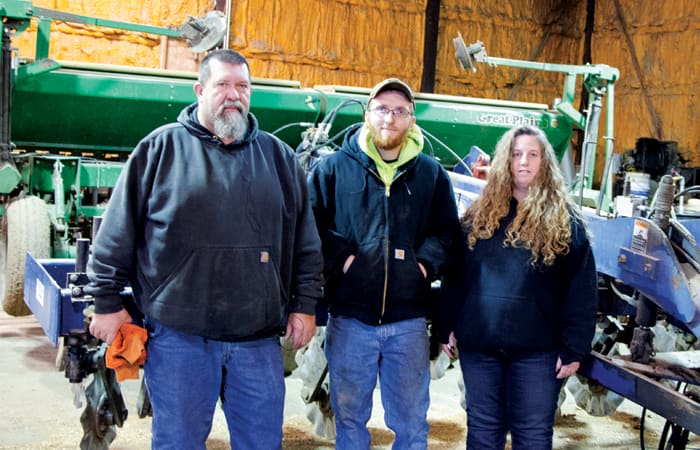 With my wife, Carrie, and son, Alex, we’re fifth and sixth generation farmers. When we got into strip-till and no-till, it was shortly after we ran into Ray Rawson at the National Farm Machinery Show in Louisville. We were looking to get away from traditional types of tillage and liked his philosophy on things.

Our first real strip-till experience was in 1988 following a severe drought. From February to July of that year, there was no rain and the ground was like concrete. We had a field with winter killed sod and alfalfa stubble, so we needed something else for feed because we were a dairy farm at the time.

We had a John Deere 7000NT planter with unit mounted no-till wavy coulters. Where it was mellow, we got the planter in and ended up with normal looking corn. Our hills remained too hard and we had no germination on them. With conventional tillage we ended up with waist-high, 50-bushel corn. The field with normal looking corn left us thinking there was merit to the system, but we needed better equipment to get moving.

We sat on the sidelines until 1992 when we bought a different planter. It was another 7000NT planter that had Yetter equipment, wavy coulter row units and a notched coulter in the front for fertilizer placement. We also built a weight bracket for suitcase weights to get it in the ground.

Mixing Tillage Techniques Makes the Most of Strip-Till