Hybrid maturity ratings have always been a sort of mystery to farmers and consultants alike.

One factor that contributes to the mystery is that your definition of "maturity" may not be the same as my definition. By that, I mean that there is no accepted standard method for assigning relative hybrid maturity values within the seed industry.

Agronomists usually refer to "maturity" as that point in time at the end of the grain filling period when maximum weight per kernel has occurred. The usual term for this is "physiological maturity" and is often associated with the development of the black layer at the tip of the mature kernel.

Another definition of "maturity" is that point in time after physiological maturity when a hybrid can be safely harvested with minimal harvest loss, either by kernel loss or kernel damage. My term for this is "harvest maturity" and is usually associated with a grain moisture content of around 25 percent.

Historically, folks have added the word "days" to this hybrid maturity rating value (i.e., 114-day hybrid), but it is important to recognize that this value does not refer to actual calendar time between planting and harvest maturity. Consequently, traditional relative maturity ratings of hybrids are of little help in determining whether a hybrid will safely mature before a killing fall frost.

Growing degree day values represent the amount of heat accumulated over a period of time. Since this method depends on actual measurement of thermal time, there is no need to compare hybrids in order to assign maturity rating values. In other words, the maturity rating for an individual hybrids stands on its own. Common values for such maturity ratings range from about 2500 (earlier maturity hybrids) to 2800 (later maturity) for hybrids commonly grown in Indiana.

The relationship between "days to maturity" and GDD ratings is close but not always exact because each is based on a different definition of "maturity", the difference being the time period between physiological and harvest maturity.

If two hybrids require the same number of GDD to reach physiological maturity, but field dry at different rates, they may be assigned the same GDD hybrid rating, but different "days to maturity" ratings. Neither method is perfect, either, because of the influences of climatic conditions and plant stress on the grain maturation process.

Another "fly in the ointment" is the fact that there are no agreed upon standards within the seed industry for the application of either method for assigning relative hybrid maturities. Minor differences in methodologies among seed companies often result in the farmer's frustration in comparing maturity values among different brands of hybrids.

Unfortunately, the lack of industry standardization can make it difficult for growers who need to make a hybrid maturity decision for late planting situations and want to base that decision on the remaining available GDDs.

Fortunately, at least one of the larger seed corn companies clearly states that their hybrids are rated according to GDD accumulations from planting to kernel black layer. Consequently, one can compare their relative hybrid maturity ratings against their growing degree day ratings to kernel black layer and develop a mathematical formula for predicting the GDD requirement of a hybrid using its relative hybrid maturity rating (Fig. 2) 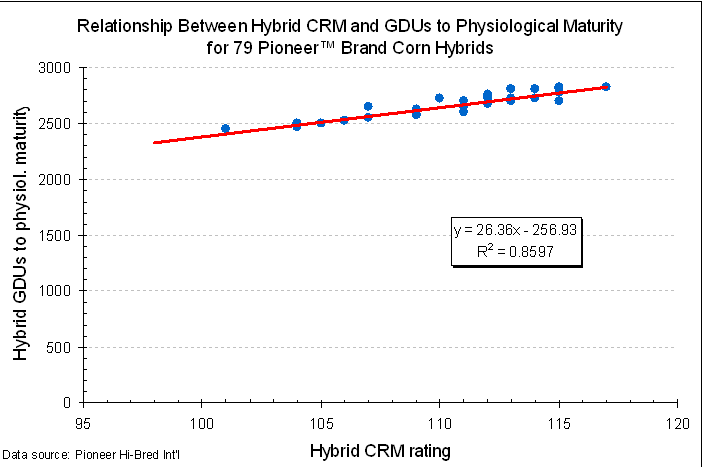 One can use this relationship to estimate the GDDs from planting to black layer for other companies' hybrids of similar relative maturities. For example, if the relative maturity of a hybrid is known to be comparable to a 110-day (CRM) Pioneer™ brand hybrid maturity, then Figure 1 suggests that the GDDs from planting to black layer would be approximately 2650. With this estimate in hand, growers can then begin the process of determining safe hybrid maturities for late planting situations.

Are Corn Dry Down Rates Affected By Maturity?

Will Corn at Vegetative Stages in August Make It Safely to Maturity?