Soil has an important function to fulfill in a cropping system. It is not stationary, just sitting there waiting to be used. When soil does not perform its functions correctly, farmers can end up with ponding water, nutrient leaching and residue not breaking down.

The first step to restoring soil health is to conduct an assessment of the soil, says Stephanie McLain, who serves as the Indiana USDA NRCS State Soil Health Specialist. McLain outlines 7 soil assessments or diagnostics that can be conducted in the field to determine how healthy soil is and if farmers need to re-activate soil function.

“Biological activity is the most important soil function because we’ve been finding out that over 90% of the functions that occur in our soil are regulated by soil biology,” McLain says. “Let the soil tell us what’s going on out there.”

Checking biological activity in the soil starts with digging a hole, observing and counting the different types of living organisms, including fungi, mites, earthworms and beetles. McLain adds that seeing predators such as carabid beetles or spiders is a positive, because those predators eat pests and are an indicator that there is food for them in the soil.

Another positive indicator is the number of earthworm middens found in the soil.

Counting the different types of organisms in the soil on a regular basis, at least once a year, can give growers a baseline for biological activity levels. “It’s really good to do the count in the spring or fall,” McLain says. “In the heat of summer, it’s really hard to get a decent count or general inventory because it’s hot and dry.”

Soil cover is protection from the impact of rain and the start of the soil erosion process. Having cover on the soil is mitigating the first step in the process.

“If you have a cover crop that’s growing above the soil, consider all the roots growing below the soil as well,” McLain says. “These roots act like rebar in concrete, they’re keeping that soil strong.”

Keeping soil strong, especially when it is wet, is critical to being able to get in the field even during wet conditions like the 2019 growing year. But soil strength is not the only benefit. Cover also provides soil with protection for temperatures and reduces evaporative losses. 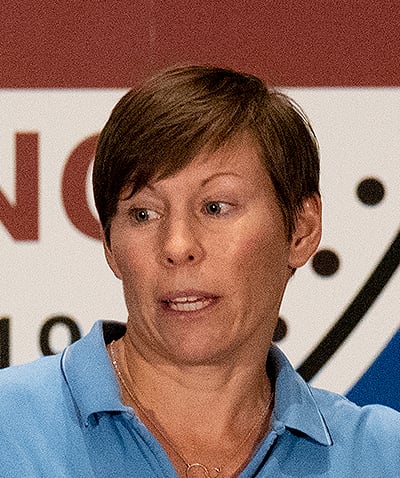 “Biological activity is the most important soil function because we’ve been finding out that over 90% of the functions that occur in our soil are regulated by soil biology. Let the soil tell us what’s going on…” — Stephanie McLain, Indiana USDA NRCS State Soil Health Specialist

“The more soil cover you have in the fall, the warmer your soil temperatures will stay over winter,” McLain says. “So, we are buffering that surface.”

To evaluate soil cover, McLain recommends that growers evaluate the number of plants per square foot. Or, if a grower is looking at residue, use the residue transect method. Residue levels should be about 70% after planting.

“Having as much cover as possible and breaking down residue sounds counterintuitive, but it’s very important, and they go together perfectly,” McLain says. “We want to look at the natural shredding and decomposition of our residue. If we’re not seeing that shredding, we’ll start to see residue building up, which is an indicator of biological activity.”

McLain says she likes to consider aggregate stability as a conglomeration of soil particles, combined with plant roots growing in and around the soil particles.

Aggregate stability is fairly easy to see in the soil, as McLain says the soil will look like cottage cheese when dug up if the aggregates are present.

“Manage your cropping system for water stable aggregates,” she says. “You want to have water be able to soak into the field, in and around and between those aggregates. If you don’t have water aggregates, those aggregates will be weak and they’ll literally melt, fall apart and then that surface seals and we have runoff.”

Soil crusts occur after a rainfall event due to weak aggregate stability, McLain says. The goal is to have 20% or less of a field with a surface crust, meaning that only 80% of the field will be able to infiltrate water.

“If you have a true surface crust, you’ll actually see a little bit of layering effect of the particles as they settled on, collapsed upon themselves,” she says. “On the surface, you can rub it and feel those individual particles are breaking loose.”

Adding cover to the soil is the recommendation McLain gives to help resolve crusting, as covers deflect raindrop impact and protect the surface.

McLain says compaction layers are identified by taking a chunk of soil and pulling it apart, looking for roots through the horizontal plane down into the next chunk of soil.

“I want to see root channels and earthworm holes, and I want to see them on both of those faces, so that they correspond together,” she says. “Ask yourself if you have a restricting layer — that’s the most important thing with historical compaction in our fields. Are the roots able to pass through?”

Biopores and rhizosheaths are created by either plant roots or soil life. McLain says pores should run through the soil all the way to the surface. Rhizosheaths are areas immediately around roots and the soil sticking to the root.

“Dig your plants out and gently shake the soil off to see if you have a rhizosheath,” McLain suggests. “That’s an indicator of biological activity, that your plant is working to feed its system and that you have active soil.”

Although soil color is depends on region, it is also an indicator of soil organic matter, McLain says. The darker the soil, the more organic matter present.

“If we talk about the 5 soil forming factors, there are 4 that are unchanging,” McLain adds. “That’s your parent material, topography, the temperature, the climate and time —how long it took to form that soil. Biological activity is the fifth factor.”

“As you work on this process and building soil health in your fields, they build confidence in your cropping system,” McLain says. “They’re not visible or obvious things in our system, but they are important.”

Soil Health Partnership to Expand to 100 Farm Sites in 2017