Corn Residue Breakdown as Affected by Tillage and N Application

Crop residue serves an important role in physically protecting soil from erosion during rain events or high winds, as well as enhancing the soil biological activity by providing sources of organic carbon and nitrogen for its energy needs. In order to understand how residue decomposes, we need to understand how the degradation processes are influenced by environmental and soil conditions; namely, air and soil temperatures, soil moisture availability, soil pH, oxygen, and type of microbial community. The composition of crop residue includes lignin, cellulose, hemicellulose, and macro and micronutrients. Certain biological and enzymatic processes, controlled by a wide range of microorganisms and influenced by other factors, must occur in order to release most of these organic forms.

In agriculture, annual cropping systems and other ecosystems management can influence these factors that are critical to the process of residue breakdown. There is a common belief among many farmers and agronomists that tillage can accelerate residue breakdown by the cutting of crop residue into small pieces or burying residue in the soil profile. Also, there is the belief that the application of nitrogen fertilizer on crop residue (i.e., corn residue) after harvest can speed up the process of residue breakdown. Both assertions are not correct.

A study conducted to examine the effect of three different tillage systems that include deep tillage (DT), strip-tillage (ST), and no-till (NT) on residue breakdown of both Bt and non-Bt corn residues. The results of this three-year field and laboratory incubation studies show no signiﬁcant differences in the breakdown or percent of residue that remained among the three tillage systems with either Bt and non-Bt corn hybrid residues. Also, after 12 months, there was no difference between tillage systems or Bt and non-Bt hybrid residue breakdown in the ﬁeld, where 34-49% of the corn residue still remained on the soil surface. The results of the residue decomposition study are presented in Figure 1, where the residue decomposition rate is represented by CO2-C release. The results show no significant difference in the breakdown or decomposition due to tillage or type of residue (Bt or non-Bt). 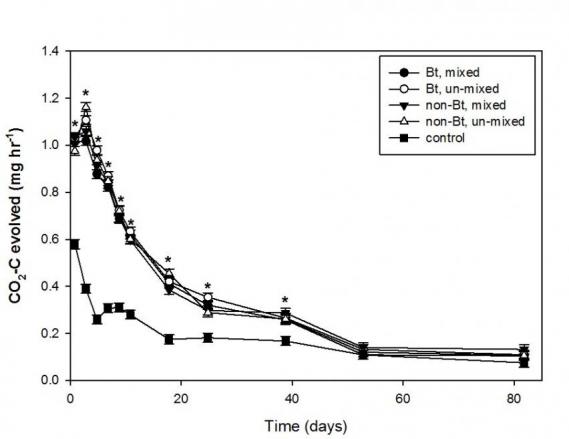 Figure 1. Rate of CO2-C released as an indicator of residue breakdown/decomposition from control (bare soil) and Bt and non-Bt corn residue mixed into the soil or un-mixed with soil (left on soil surface). Asterisk represents CO2-C released rates from treatments that were significantly different from control for the corresponding days at the 0.05 probability level using the least significant difference. 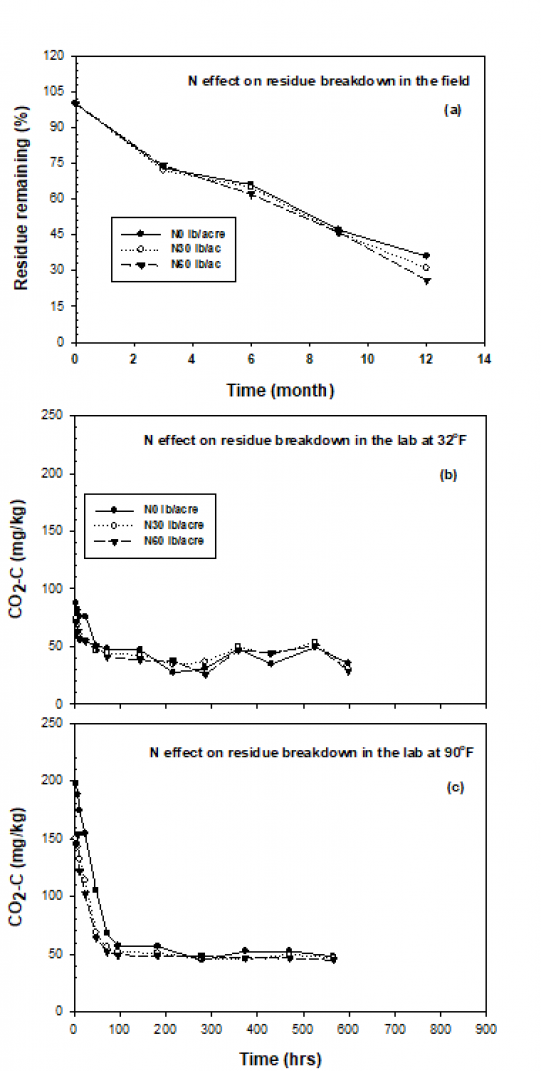 The use of tillage or N application to increase residue decomposition can be counterproductive from economic and environmental perspectives. From an economic perspective, both options of management add additional costs of materials, time, labor, fuel, and equipment costs. Environmentally, both tillage and this fall N application are not very sustainable practices. Tillage can contribute to soil health and water quality deterioration by increasing soil erosion potential, sediment loss, and water quality degradation, and fall N applications result in water quality risks. Since residue decomposition is controlled by biological processes that are influenced by environmental and soil conditions, our research and many other studies do not support these practices regardless of the justification or claims that propose tillage equipment can manage residue. Disturbing the soil does not constitute an improvement in soil health nor increase in residue decomposition.

Are Corn Dry Down Rates Affected By Maturity?