Managing an 11,000-acre operation, Kentucky grower Brandon Hunt has created a robust strip-till system with cover crops, but figuring out the details of seeding populations, timing and how wide to make rows of covers was challenging.

Pictured Above: COVER CROP KEY. The first thing Brandon Hunt learned was that their seeding rates were too high for their situation, although he notes that covers are necessary for achieving their operation’s goals. He was trying to figure out a way to set themselves up for success while not waiting until every acre is perfect.

In the 2020 cover crop benchmark study conducted by Strip-Till Farmer sister publication, Cover Crop Strategies, the data found that 42% of growers have only used cover crops for 5 years. Brandon Hunt, Herndon, Ky., is one of those newer cover crop adopters.

He’s been using cover crops on his 11,000 acre corn and soybean operation since 2015, but admits it’s been a trial-and-error learning experience.

“We initially seeded cover crops just for erosion control,” he says. “We planted a multi-species mix in the fall of 2014 that included cereal rye, radish, Austrian winter peas, clover and black oats. We sprayed and burned them down like we normally would the following spring, and there was nothing. We’d planted corn that spring, and it was terrible, too. That was on about a 450-acre field. So that wasn’t the right answer.”

Despite the initial setbacks, Hunt saw enough promise to know that cover crops would be a very important complement to his cash-crop system, and he had to keep experimenting to find what worked best for each part of their operation.

Experimentation helped Hunt realize that there are a lot of years where he can’t control everything. Hunt’s preference with strip-tilling is not necessarily to be 100% correct all the time but controlling variables when making multiple passes in the field.

“Currently, we drill a cover crop mix with a cereal rye base using a Case IH Precision Disk 500T drill on just about every acre to set it up for our strips,” he says. “We have half-inch rows of covers and leave a 30-inch center for the strip-tiller and we plant two 7½-inch strips of cover.” 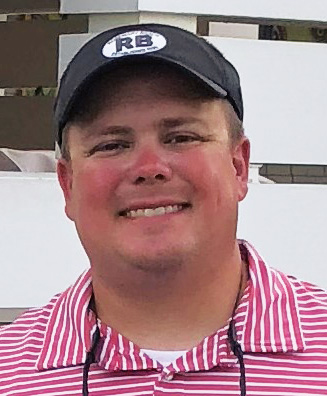 The first thing he learned is that the seeding rates were too high for what he was wanting to accomplish. In 2017, Hunt seeded 60 pounds of cereal rye per acre, but let the crop grow too long.

“When we sprayed it, the biomass just fell down on top of the strip, kind of like a windblown wheat,” he says. “It made it extremely difficult to get in there and do things with the planter. So, we’re trying not to set ourselves up for failure right out of the gate. We’re trying to plant 5,000 acres. We can’t wait until every acre is perfect for the strip-till rig.”

Hunt and his operators can seed covers a lot earlier when they do so right behind the combine after harvesting corn. For acres where double-cropped soybeans are coming off in October or November, Hunt says they’re still trying to figure out how to give covers the time by widening the window using strips for cover crop establishment in order to capture the full benefits.

“This is an entire system that we’re trying to build into an ecosystem, from the tillage to the covers and the value those covers add back to the ground and the long-term benefits.” 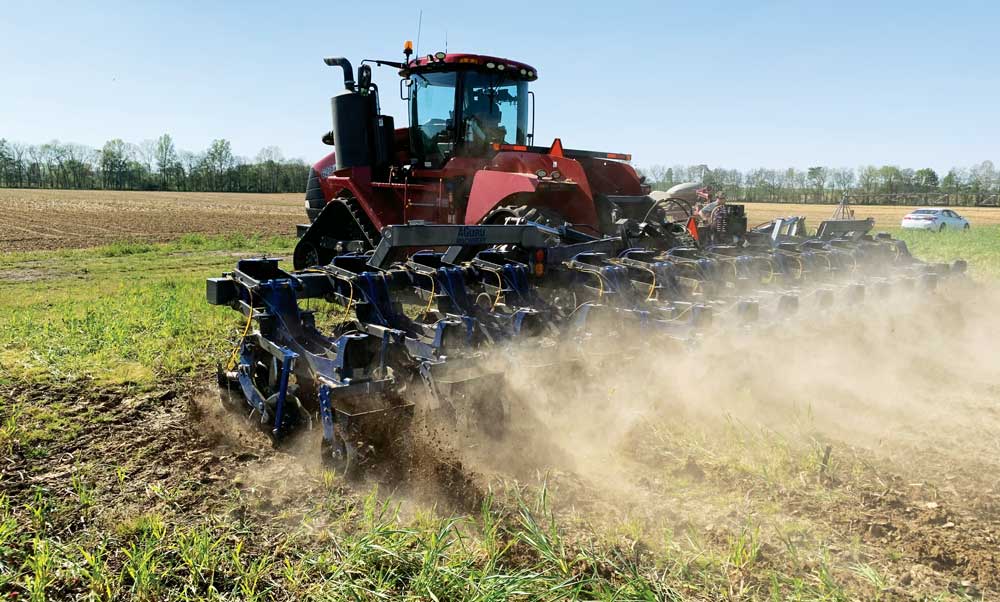 FIRST THINGS FIRST. Kentucky farmer Brandon Hunt’s first step was determining their normal strip-tilling practices on their 11,000 acre operation, which they decided would be fall stripping to prepare the soil for the following spring. He also wanted to use covers to provide erosion control and get biological benefits below ground.

Managing different soil types based on that system and dealing with the limitations of time are two challenges for Hunt. He tried using vertical tillage to level out ruts caused by harvesting in wet conditions, but that approach resulted in decreased cover crop root penetration.

“The normal thing to do is to utilize the vertical tillage tool to negate what’s caused with the combines, grain carts and trucks,” he says. “When Mother Nature goes against us, it’s not going to stop. We’re just trying to be better prepared to figure out what needs to happen whenever we get thrown
curve balls.”

Interestingly, Hunt notes that the fields which received chemical burndown treatments significantly out yielded the fields that were terminated with crimping. Burndown timing and presence or absence of relay did not affect yields. When corn was planted after chemical termination, the trend was for corn plants to be better spaced, a barely discernible pattern.

Setting Up for Success

Strip refreshing is another tactic Hunt has used to prepare soil in the spring. Although refreshing resulted in yields equal to or lower than stale strips, the soil temperature and moisture they have is more ideal ahead of planting. Putting the compaction layer right on top with the AGuru Yield Till HD 16-row strip-till rig allowed the root penetration of their cover crops to heal the soil.

“Root zone banding at a 70% rate can yield just as well as a broadcast application at a full rate. It was a pretty eye-opening experience…”

“Not having a cover crop over those strips is decreasing the soil health a little bit,” he says. “It’s a happy medium to get some soil health and accomplish our strips, too. We try to fix those problems in the field before we get our strip-tiller out.”

Hunt says he saw the biggest difference between the fertilized and unfertilized strips in a test plot.

“We didn’t lose anything. Broadcasting wasn’t any different than root zone banding,” he says. “We raised fantastic corn on both setups. For a strip-till system implemented in scale to the number of acres we’re trying to run across, it’s more important to get that system mechanically accurate. The actual fertilizer application was the easiest part of this system.”

Hunt says they use 2-by-2-inch relay fertilizer placement on every acre they plant and plan the application timing around cover crop seeding. The cover crop puts less emphasis on the relay. Where there was more corn residue, Hunt says there was a good amount of biomass in between the centers.

“We can’t afford to pay that yield penalty, so we need to continue to bridge the gap in the center,” he says. “We can go ahead and strip-till and still have the cover crop coming up.”

Because the strip-till rootzone was banded, there was more of an economic impact than an agronomic impact. Hunt thinks that he can reduce the root zone banding even more in the next 2-3 years.

“I remembered back to the years when there was a moisture difference in those strips, but the refreshed strips weren’t providing what I thought they would coming into the new spring,” he says. “A root zone banding at a 70% rate can yield just as well as a broadcast at a full rate. It was a pretty eye-opening experience. In the next year or so, we’ll start going back to root banding to negate the economics of the corn crop to be more profitable.”

“In theory, the only difference between these two is the hydraulics in the cart,” he says. “I was kind of surprised at the power and fuel penalty — that was a big difference. I didn’t think that hydraulics would have that much separation.”

[Podcast] An Economic Mindset to Building a Bankable Strip-Till System

Building Confidence In Strip-Till With A Two Pass System