Constant innovation in strip-till can be challenging.

Clint Robinson of Sullivan, Ill., knows. His first attempt at blending conservation techniques and soil health principles came in 2012, shortly after he moved back to the family farm.

While strip-till wasn’t a silver bullet, gradual improvements over a number of years yielded big results, including successes with relay cropping as an expansion of gross revenue, Robinson says.

Sticking it Out with Strip-Till

Robinson, who says he’s always looking to try new things, has built steadily on his strip-till practices. He tried cover crops in fall 2012, but the start of his journey with strip-till was in 2013 when he purchased a Kuhn Krause Gladiator 16R30.

“We tried some systems with markers,” Robinson says. “Once we got into RTK, it became a lot easier.”

Robinson stuck with his new equipment through 3 years of wet falls, until 2016, when he moved his operation off anhydrous ammonia and toward other liquid and dry forms of nitrogen (N).

“By getting away from anhydrous, we went to more broadcast applications of N, whether it be urea broadcast or a weed and feed with 32%,” he says.

More changes followed. He dropped diammonium phosphate (DAP) in 2017, instead moving to Mosaic’s MicroEssentials nutrients instead. The following year, he switched to Y-Drops for most of his nutrients.

“We figured if we’re going to put all of our other nutrients in that row, we’d band our nitrogen, too,” he says.

But Y-Drops aren’t for everyone.

“Some people love it, some people hate it,” he says. “It’s worked good for us so far.”

He also started applying YaraVita’s Procote Zn, which he says was effective both at distributing the micronutrient and eliminating dust, which in turn helps prevent equipment corrosion.

Robinson added a 24-row Yetter strip freshener to spring planting in 2019 and began adding urea-ammonium nitrate prior to planting.

“That freshener pass for us seems to have resulted in more uniform emergence,” he says.

In 2020, Robinson added pelletized gypsum to alter the soil structure.

The first attempt at cover crops in fall 2012 was a miscue, Robinson says.

“We split some fields with annual rye grass that year,” he says. “We had a really warm fall, a good growing season that never quit until February. Our rye grass just got absolutely out of hand. We probably should have killed it in January when it was shorter, but we didn’t. By the time we got around to planting, it was just a mess.”

Robinson moved to winterkill alternatives for 2013 and 2014, including oats, radishes and buckwheat, in part reacting to the rye grass mess.

Winterkill covers are “an easy way to do it, get something out there,” he says.

Robinson returned to cereal and annual ryes in 2015, and ran headlong into a colder, wetter spring, which saw area farmers grappling with slugs. He ultimately had to replant his beans in July to deal with the condition. 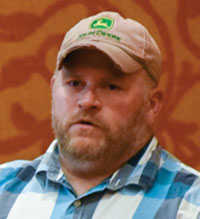 “Whatever cereal grain you’ve got, if it lodges, you’ve got a decision to make…”

Another cold spring hit in 2019, which delayed corn planting that season until June. As a result, he planted no covers that fall, which he says he regrets.

“I really think that was a mistake,” he says. “2020 was by far our worst soybean average.”

“I really like the tilth and the soil structure we’ve got in that system,” he says.

In 2017, bolstered by success with strip-till and cover crops, Robinson launched his first attempt at relay cropping, after seeing other farmers relay cropping on Twitter. The first hurdle to the process was the absence of manure, Robinson says.

“I thought ‘Well, I don’t have manure,’ so we took the knives off our strip-till bar and then we zip tied the fertilizer hose right in front of the rolling basket,” he says. “We blended 75 pounds of wheat seed and 100 pounds of DAP.”

“Normally in monocrop wheat, we run about 120-150 pounds of wheat, so that’s about half,” he says. “After the wheat was up, we came back with 150 pounds of potash and 75 pounds of MicroEssentials. That’s a little bit light of normal fertility for our normal soybean crop.”

The wheat was planted in October and had started to come up by Nov. 4. Planting the wheat early allowed Robinson to spot things about his equipment he wouldn’t ordinarily.

“The MonTag Box, we learned by its seeding, has a pretty long V-pattern whenever we turn on the ends,” he says. “It was probably 8-10 feet. Whenever we’re fertilizing, if you’re going to have that gap, you have to kick your MonTag box on about halfway through your turn.”

The wheat vegetated over the winter, and on March 8, Robinson banded in 100 pounds of UAN at 32%. He followed that with a combination of Prowl H2O and 2,4-D herbicides for weed control on April 7.

“This is kind of your last opportunity in this system for weed control,” he says.

About 2 weeks later, he planted 30-inch rows of soybeans in between the 30-inch rows of wheat, which had returned to active growth. He came in aggressive and planted the soybeans at 140,000 beans per acre in that first year, though Robinson typically plants less than that now.

He used XTend soybeans at a 3.6 maturity to maximize the growing period.

By May 12, the beans had emerged, and Robinson applied Prosaro fungicide.

By June 18, the wheat had matured enough for a first cutting, and Robinson set out to cut about 19% of his crop. He learned important lessons.

“Today, whenever we harvest wheat, we’ve got a bed set up with air so we can put it in the bin dry,” he said.

His first year he used a combine to take the tops of the wheat.

“A lot of guys who do this have pushers that will push the beans down so they don’t come off, which is ideal, because they have narrower tires,” he says.

Narrower tires allow the equipment to fit in between the strips, but  Robinson wasn’t sure about the investment.

“I’m running floater tires,” he says. “My thought was I’ll run at an angle. It’ll push the beans over on the wheat stubble, and it’ll help them come back up. It wasn’t really an option for me to run something that pushed the beans over.”

Robinson did lose some bean tops as a result.

Final harvest for wheat was on June 28. It was still possible to apply dicamba that year on the wheat, too.

By Aug. 27, the soybeans had taken over.

“They have totally shaded the rows,” he says. “You couldn’t even tell there was ever wheat out there, and they’re probably pretty heavy for what we were expecting.”

The relay results are mixed, Robinson says. For one thing, he’s minimized soil disturbance, an important part of what led him to adopt strip-till in the first place. Wheat has also allowed him to keep a living root in the soil from about November 2017 to October 2018, which also leads to better residue coverage.

The biggest win was in the wallet, Robinson says.

“The important part of the relay is the economics of it,” he said.

“We wanted to be out there spraying fungicide, but that’s the same time we’re planting beans and the same time we’re side-dressing corn,” he says. “There’s a lot going on for us. The guys who grow wheat know this, and they’re used to that, but for us, it’s a little bit new.”

“Whatever cereal grain you’ve got, if it lodges, you’ve got a decision to make,” he says. “Either leave it and just take the bean yield off that, or you’re just going to destroy your beans trying to get it.”

He’s also seen other alternatives, like wheat grown with pumpkins instead of soy, and in parts of South Dakota, sunflowers are grown in between the wheat.

“If you’re looking to get more income off of a wheat crop, I think this is a good way to do it,” he says.