What to Expect When You’re Expecting Strip-Till

Joey Hanson lays out some perils and pitfalls for new strip-till adapters.

Elk-Point, S.D., strip tiller Joey Hanson works strips not just for himself, but also for his strip-till customers on both sides of the Missouri River.

Hanson started strip-tilling in 2013, after deciding the season-to-season grind of conventional tillage was too exhausting to continue. Hanson married the idea of equipment acquisition closely to his decision to begin a custom strip-tilling operation.

“This started with a banker and a 6-pack,” he says. After several months of research, “I walked into my banker’s office at a quarter of 5 one day with a 6-pack and I said I got this idea of starting a business to independent crop consult and strip-till. And he’s like ‘What the heck is strip-till?’”

That discussion was part of an attempt to construct an alternative to conventional tillage for the long-time agronomist.

“I was just really getting tired,” Hanson says. “Being in the ag retail sector, I knew that other people felt the same about conventional tillage and doing the same thing over and over again.”

He looked into minimum-till, no-till and ridge-till set ups, and discarded each for different reasons.

“We already tried no-till,” he says. “We didn’t have very good success with it. I couldn’t find a way to form a business around no-till. I was seeing a lot more vertical-till machines. But agronomically wise, I didn’t like some of the results I was seeing from some of the minimum-till, putting an early season plow pan in, in the springtime. I didn’t think that was the way to go. We had some guys in our area doing ridge-till, which was an extremely intensive practice with a lot of labor and time management. I didn’t like the idea of that.”

Strip-till struck a balance between the decision to break with conventional tillage while also wanting to maintain consistent results.

After the banking consultation, Hanson struck out and purchased his first rig, a 12-row Blue-Jet Legacy implement originally designed (and used) for the application of anhydrous ammonia.

“It was a modified, glorified anhydrous applicator,” Hanson says.

He set out to strip-till about 2,500 acres in his first season, but ultimately strip-tilled only about 1,350 acres.

The discrepancy almost spelled disaster for his fledgling business. Part of the difficulty was acclimatation to new equipment, but also the new equipment in the context of soils that had been subjected to long traditions of conventional tillage.

“That fall I did a field for a guy,” he said. “He was new to strip-till and had 160 acres, but it was the tightest soil I’ve ever seen in my life. It took me three and half days to do 160 acres. I plugged all twelve rows on every single pass.

“It was merely from a lack of understanding how I should run that machine in heavy wet soils. I could go back today now with my knowledge and those same type of conditions, and probably not plug one single time.”

However, time and patience paid off, Hanson says. Farmers who had worked with him during the lean year in 2013 called him back in 2014, and so did their friends. With enough success, he upgraded to a 16-row Kuhn Krause Gladiator under a 9-ton Montag Gen 2 Twin Bin, run behind a John Deere 9560RT.

Growers considering moving from conventional tillage to strip-till may not know the amount of accuracy required, Hanson says. That accuracy is frequently furnished by auto-steer and other implement guidance systems, he says. It’s something newcomers to strip-till ought to be on the lookout for.

“The success of strip-till, in my opinion — and not to take anything away from any manufacturer out there — is not actually a piece of iron at all,” he says. “The success comes from the ability to plant sub-inch paths from the previous year application of strip-till.”

“Let’s be very realistic about one thing: you don’t always get a picket fence stand with strip-till. Not even close…”

For example, wide or narrow rows — which can both be present in the same field under the wrong conditions — can result in detrimental effects for yields.

“One strip-till operator [I worked with] was not aware that his guess rows were off,” Hanson says. “Consistently off. Not just wide, but also narrow.”

“I did multiple stand counts in this field where we were finding ourselves just off the edge of the strip. The stand difference consistently throughout this field where he was wide and narrow was between 4,000-5,000 plants,” Hanson says. “That’s a pretty easy equation to lose probably 30-40 bushel right off the top, just from not having the stand right there.”

“This is something I hone in on a lot,” he says. “I have some smaller growers that don’t run any autosteer whatsoever. They run 12-row planters, and I tell them ‘Do whatever you need to do, chain your marker up, but we’ve had a lot of instances in previous years of lack of knowledge, where guys ran markers because they didn’t have autosteer when they were planting and then they want to follow their mark, and they were off that strip just a little bit.”

Those starting out with strip-till should be aware of the reasons they want to get into strip-tilling in the first place. For example, Hanson defines his objective as:

“Create ideal planting conditions by forming a consistent and uniform strip, which will efficiently and correctly apply the crops’ required needs.”

“That’s a little bit different mindset than conventional till and broadcast,” he says. “We’re feeding the soil in broadcast, and in strip till I think we’re more focused on feeding the crops.”

Hanson also emphasized adjusting expectations to meet reality, a process he says he underwent multiple times as he honed his own skills and expanded his custom business. 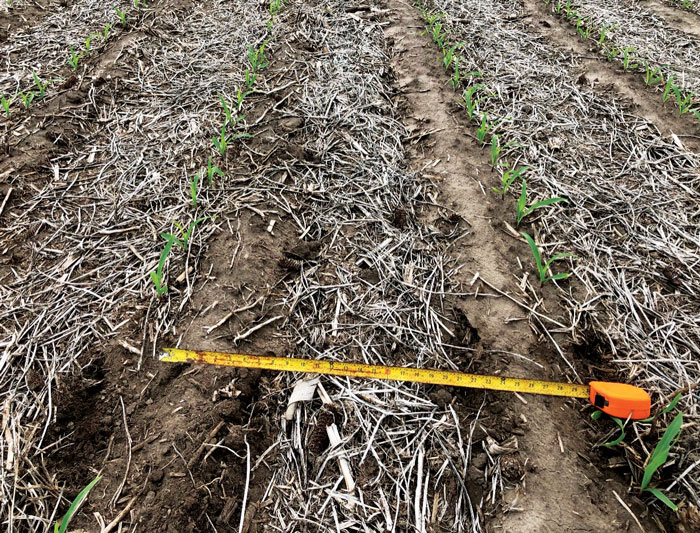 HALF NO-TILL. Uneven rows for strip-tilled crops created a situation where one strip was near the edge, (right above) and one row was completely off the strip. Hanson says sub-inch accuracy — usually accomplished with steering assistance — is central to successful strip-tilling.

“My mindset was that I absolutely had to achieve perfection,” he says. “I had to increase yield with this practice of combining tillage and fertilizer application. And the reality of it is that is just not the case. Very seldom am I ever running in perfect conditions. It just doesn’t happen. So, you have to be flexible if you really want to be successful.”

That flexibility also means adjusting to meet client demands on the business side, Hanson says.

“We wanted to get away from conventional till, we wanted to start to try healthy soils, we wanted to try to get earthworms back in our soil,” he says. “That wasn’t necessarily the goals of the growers I was strip-tilling for. Some of them were just getting older, they didn’t have anybody coming back, so they needed more help in the fall. Some of them said ‘You know, I’ve always heard that planting conditions were nearly perfect with strip-till,’ and so we kind of wanted to focus on our stands. Some of them just liked and understood the banding of nutrients aspect of it, as they maybe ran starter on their planter. So everybody had their own goals. It was my job to essentially create a strategy as to how I got there.”

First-time strip-tillers also need to be willing to challenge their own assumptions about what strip-till looks like.

“Spring 2020 was a prime example of that. We started early, actually had a pretty dry spring with limited subsoil moisture, and then in early April, we got a 2½- or 3-inch rain. Which was a blessing, but it was also a curse because my 9560 RTs has 36-inch tracks, so rows 7 and 10 run behind a track, and there’s no way around it. I could not get those two rows to make nice strips to save my life.”

“I’ve never spent so much time on a machine as I did that spring, trying to modify that thing for two rows to get them to look like the rest of them,” Hanson adds.

At least one customer decided to take matters into his own hands, Hanson says.

“I had one grower who did 1,300 acres with me, and then worked every single acre afterwards, which was the wrong thing to do,” he says.

The grower ended up compounding soil moisture loss from the fall strip-tilling and then hoping for rain, which didn’t come, Hanson says.

“We run into challenges even today, with the knowledge that we have,” he says. Be Patient And Pick Best Soils When Switching To Strip-Till

[Podcast] The Best of ‘22: Boosting Yields, the Complexities of Strip-Till & When to Sell Used Equipment