3 Considerations to Set Up Soybeans for Success

Pre-planting decisions are extremely important to set up soybeans for success. Soybean Extension Specialists from across the U.S. have been working together on the Science for Success initiative, funded by United Soybean Board, focused on leveraging local expertise to provide national soybean best management practices. Recently, we’ve focused on soybean planting date, row spacing and seeding rate. 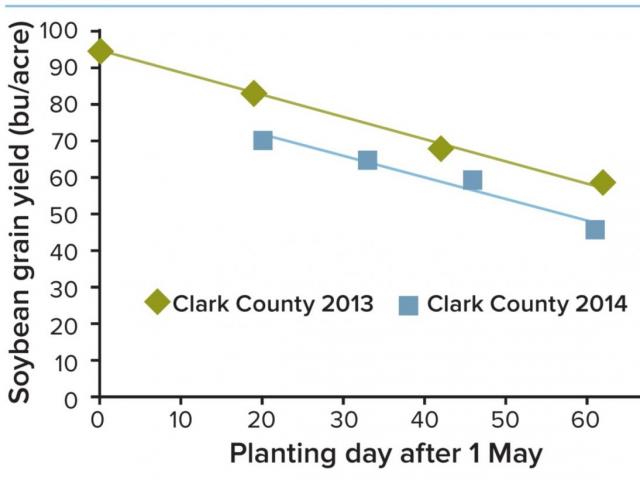 Soybean planting date has a large effect on yield. In Ohio, yield reduction as a result of late planting ranges from 0.25-1.0 bushels per acre per day. In our small plot research in Clark County, Ohio, soybean yield reduction in 2013 and 2014 was approximately 0.6 bushels per acre per day for each day planted after early to mid-May. Although early planting is important to maximize soybean yield, deciding on when to plant should be based on field suitability and soil temperatures at the time of, and following, planting as well as frost forecast. Soybeans can germinate and emerge when soil temperatures are at or just below 50°F. At soil temperatures between 50-60°F, soybean plants typically take about 15-20 days to emerge following planting. Planting into a wet seedbed or following too much tillage can result in compaction and soil crusting which could reduce stand establishment. At the same time, planting into extremely dry soil can also be detrimental to stand establishment due to insufficient soil moisture for germination and/or emergence.

For more information on “The Best Soybean Planting Date”, please see this Science for Success article.

For more information on “How To Pick The Right Soybean Row Spacing”, please see this Science for Success article.

In Ohio, for a crop planted in May, a final plant population of 100,000 to 120,000 plants/acre is generally adequate for maximum yield. Final population is a function of seeding rate, quality of the planting operation, and seed germination percentage and depends on such things as soil moisture conditions, seed-soil contact, disease pressure, fungicide seed treatments, etc. Ensuring maximum yield requires farmers to plant at rates higher than the minimum required plant population. As a general rule, seed about 25% higher than the target plant population. For example, for a target plant population of 100,000 to 120,000 plants/acre, you may want to seed 125,000 to 150,000 seeds/acre.

3 Steps to Decide If Replanting Corn, Soybeans Is Necessary