The impact of planting date on projections of corn and soybean yield is always an important issue at this time of year. The Crop Progress report from the USDA indicates that only 2% of the 2022 U.S. corn crop was planted as of April 10. While this is only slightly less than the 5-year average for this week, the concern is that cold and wet conditions in much of the U.S. Corn Belt will cause planting progress to fall behind the normal pace, and this will in turn reduce yield potential. The purpose of this article is to review what is known from agronomic field trials about optimal planting dates for corn and soybeans in Illinois.

As discussed in earlier farmdoc daily articles (May 13, 2020 and May 20, 2020), there are different approaches to assess the impact of planting date on state or national corn and soybean yields. It is safe to say that the starting point in all discussions on this subject should be the results of agronomic field trials. Rigorous experimental methods are applied in these field trials to determine planting date impacts. Alternative planting dates are used in the same locations with the same varieties and management practices to isolate the impact of planting date on yield. Multiple locations and years provide the necessary sample size to draw reliable conclusions.

Here at the University of Illinois, Professor Emeritus Emerson Nafziger has been conducting planting date field trials for corn and soybeans for many years (e.g., Nafziger, 2020). He shared updated results for this article, for which we are grateful. It is typical of the information generated from agronomic research relating planting date to corn and soybean yields. The trial results are presented in Figures 1 and 2 and Table 1. The observations for corn are drawn from 4 central and northern Illinois sites over 2007 through 2021. The observations for soybeans are drawn from 6 southern, central and northern Illinois sites over 2010-2020.  Figures 1 and 2 contain the individual site observations as well as an estimated planting date response curve. Note that yield in these two plots is expressed as a percentage of the maximum yield for all planting dates at a location in a given year. This normalizes the observations for different yield levels across years. Table 1 presents a side-by-side comparison of planting date impacts on corn and soybean yield in terms of a yield penalty.  The cumulative yield loss by a given date is presented in both percentage and bushel terms. 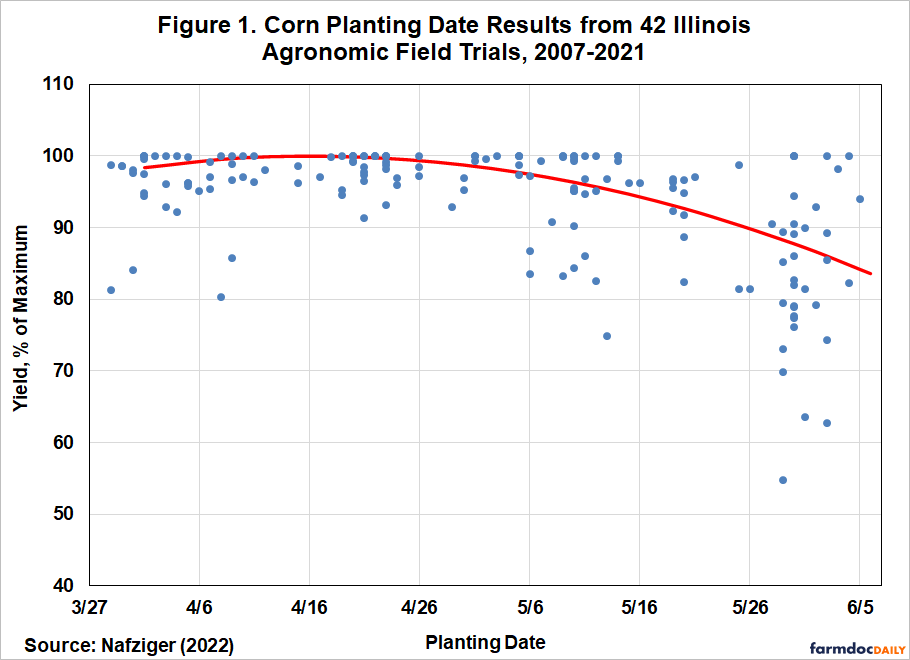 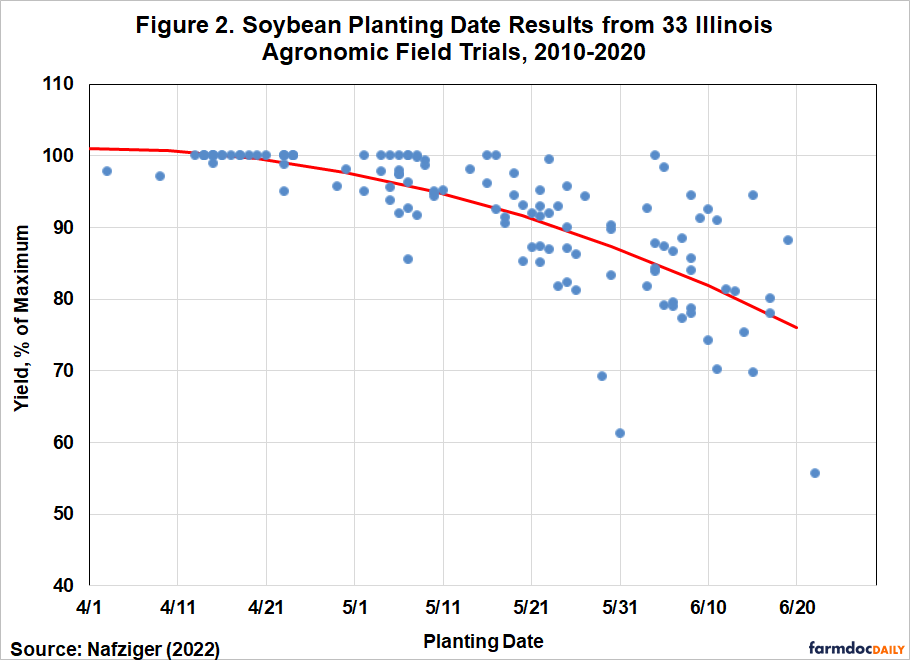 #2. The optimal planting window for corn and soybeans is similar.

#3. Substantial yield penalties for late planting do not begin until mid-May.

#4. The yield penalty for very late planting can be quite large.

Planting corn and soybeans in June may result in large reductions in yield for both corn and soybeans. Early to mid-June planting can lead to yield losses as large as 20-25 percent.  This reflects compression of the growing season, which reduces the time for grain fill, as well as pushing maturity closer if not past first frost and freeze dates. The lost revenue can be surprisingly large in these cases.  For example, the estimated 35 bushel loss in corn yield for planting on June 5 (listed as June 10 in the table) is $175 per acre at $5 per bushel.

#5. The response of yield to planting date is inherently uncertain, especially for very late planting.

Figures 1 and 2 show a notable range of data observations for most planting dates for both corn and soybeans.  It is interesting that the only obvious exception is for planting soybeans in early to mid-April.  Otherwise, the spread of the data points on a given date is generally at least 10 percentage points.  The spread increases dramatically the later the planting date.  As an example, the lowest observation for corn on June 2nd is 62.7 percent and the highest is 100 percent. The lesson is that planting very late can still result in good yields if everything goes just right the rest of the season, but if conditions are less than ideal then things can go very wrong.

It is important to emphasize that the field trial results on planting date reviewed here strictly apply only to Illinois. Results from corn and soybean planting date research for different years and different locations throughout the Corn Belt vary somewhat, but the reported pattern of yield response to planting date is comparable to those presented here. Examples of other research in this regard include Abendroth et al. (2017) and Long et al. (2017).

How Will Russia's Invasion of Ukraine Impact US Corn Exports?