As the calendar moves through the summer months and postemergence herbicides are applied to late-planted crops, it's a good time to review some research on the effects of high temperatures on Group 27 herbicides. Research conducted a few years ago, led by Drs. Mithila Jugulam and Curt Thompson, focused on Palmer amaranth control by mesotrione (Callisto, others). However the results they reported may explain some poor control being observed following the recent applications of Group 27 herbicides like topramezone (Impact, others) or pyrasulfotole (Huskie, others) in populations that are believed to be susceptible to Group 27 herbicides.

The results of the research (Figure 1) shows that when Callisto was applied at 'low' temperatures (77 degrees F daytime high and 59 degrees F nighttime low, far left panel of Figure 1), Palmer amaranth was controlled by the lowest herbicide rate included in the study (about 0.75 fl oz/A). However, when Callisto was applied at 'high' temperatures (104 degrees F daytime high and 86 degrees nighttime low, far right panel of Figure 1), Palmer amaranth was not controlled by the highest rate of Callisto used in the study (3 fl oz/A). These application rates do not necessarily agree with field use rates, because lower herbicide rates are often used in greenhouse or growth chamber studies such as these to account for more 'tender' plants that are controlled more easily than plants grown in field conditions.

The researcher described two key changes in Palmer amaranth that caused reduced control. First, Palmer amaranth metabolized mesotrione faster at higher temperatures. This means the herbicide gets degraded faster when temperatures are high, making the herbicide less effective. Second, the HPPD enzyme, which is the target site for Group 27 herbicides, had increased activity at high temperatures, making it easy for the plant to overcome the effects of mestrione.

For maximum effectiveness, Group 27 herbicides should be applied under the coolest conditions possible. It is very likely that other pigweed species such as waterhemp and other Group 27 herbicides, including tembotrione (Laudis), tolpyralate (Shieldex), topramezone (Impact), Balance Flexx (isoxoflutole), and pyrasulfatole (Huskie) will react the same way as Palmer amaranth to mesotrione. 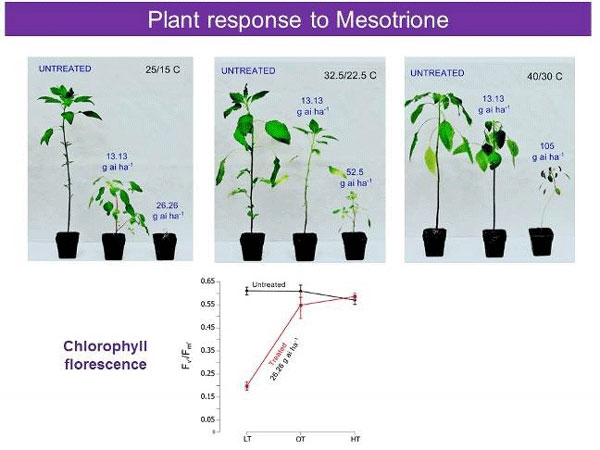 Superweed Resists Another Class of Herbicides