Corn has been growing in a hot and dry summer, which will certainly limit grain yield in 2022. Thus, adjusting combine settings can be very helpful in reducing yield loss during harvest operations.

Ground speed is one of the most important factors that a combine operator can control to improve harvest efficiency. By matching combine ground speed to crop throughput and harvest conditions, the operator can improve harvest efficiency. Excessive ground speed results in greater losses at almost all stages of the harvesting operation. Ground speed that is too slow may fail to keep the combine operating at full capacity, decreasing the threshing efficiency and increasing the specific fuel consumption (gallons/bushel).

Header loss occurs when kernels do not make it into the machine. Both biological and mechanical factors contribute to header loss. Corn that has lodged or is too dry may shatter, causing whole ears to be lost. Deck plates that are set too widely may cause excessive butt shelling of the ears. Adjusting both the header speed and relative ground speed can reduce header loss; slower may be better.

To measure header loss, harvest a portion of the field and then place a marker toward the rear of the combine and in front of the tailings discharge. Back the machine up so that the front of the header is even with the marker. Grain on the ground in the area between the header and the unharvested portion of the field is due to header loss. To determine the loss per acre, count the number of kernels or ears on the ground between the front of the combine and the unharvested corn and estimate the yield loss.

As with most other crops, cylinder or rotor adjustment has a great effect on corn quality. As much as 80% of corn kernel damage occurs during the shelling process, so careful management at this point will produce dividends throughout storage and drying. Moisture content has a large effect on the amount of damage, with fines increasing rapidly at high moisture. If possible, delay harvest delayed until moisture is between 20-25%.

Machinery settings can affect grain losses at the sieve and chaffer. Grain losses may be reduced by adjusting fan speed. If there is too much trash, the kernels stay in the trash through the straw walkers in a conventional combine or over the cleaning shoe in a rotary design. The kernels are then thrown out of the machine in the tailings. This can result in a windrow effect when the corn kernels germinate (Figure 1). 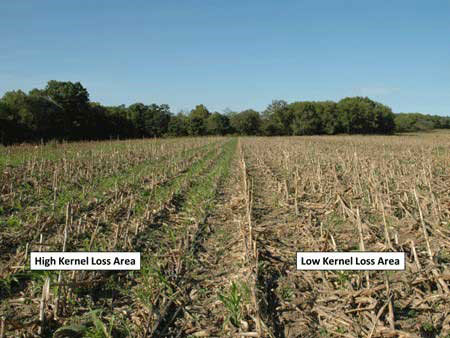 Careful adjustment of the combine can improve this. If the air speed is too high, too many kernels are lost. Conversely, if air speed is too low, unnecessary foreign material is retained in the grain resulting in quality dockage at the point of delivery. Adjust chaffer and sieve to minimize grain losses in the tailings. Yield losses from cleaning operations can be measured by counting kernels behind the combine. Especially look for windrowing effects if an adequate spreader is not used.

Now is the time to prepare for harvest by getting equipment in optimal operating conditions. In addition to the combine losses described here, additional losses can occur during transfer events. While this may look substantial, it is usually not very high across the entire field.

A final consideration is to examine the efficiency of all crop harvesting operations. Because we have a long period of warm temperatures and the possibility of adequate fall rain, we could see the corn harvest losses as volunteer corn. Similar losses can occur during wheat and soybean harvests. However, these losses are often not as apparent as the losses during corn harvest. Improving crop harvest efficiency means more grain in the bin and less on the ground.

How to Check Your Parallel Arm Linkage