Be Confident, Collaborative with Your Strip-Till System

Having recently returned from our fifth annual National Strip-Tillage Conference in Iowa City, Iowa, I’m taking a deeper dive into the pages of notes I took during speaker sessions, roundtable discussions and hallway conversations.

One of the aspects of the event which impresses me every year is the willingness of attendees to be open resources for one another, regardless of experience, age or equipment preference.

As attendees began filtering in for the start of the event, a newcomer to the practice overheard a conversation between a couple of experienced strip-tillers who were chatting about nitrogen (N) application experiments.

He asked to join them, and candidly admitted, ‘You two know a lot more than me and I’d love to pick your brains.’ More than an hour later, the three farmers were still engaged in discussion, with several pages of visible notes in front of the new strip-tiller.

These scenarios can be the difference between a one-and-done attempt at strip-till to a long-term loyalist to the practice. Time and again at the conference, I heard experienced attendees preach patience as the pathway to building confidence in strip-till.

Sitting in on a roundtable where attendees shared lessons learned during their first year of strip-tilling, I came away with several observations, one being that there were at least 3 sets of fathers and sons sitting in on the conversation. 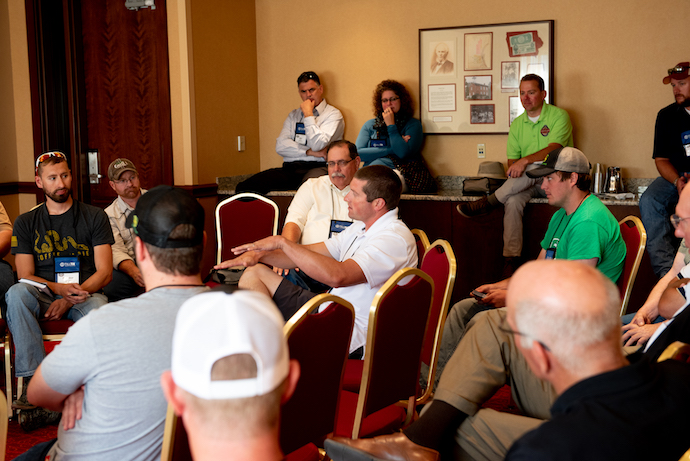 It was evident that the younger generation had convinced their elders to listen and learn from peers on how to make strip-till successful, along with cautionary tales on what mistakes to avoid.

Many of the practical points about row unit setups and fertilizer placement made during the discussion were capped with comments like “you need to be open-minded enough not to be your neighbor,” or “don’t be afraid to be the first person in your area to start strip-tilling.”

The advice was far more than lip service, coming from first and second year strip-tillers who had already navigated those awkward conversations with other local farmers, loyal to conventional tillage practices.

Said one strip-tiller who acknowledged the initially isolating feeling of being the first strip-tiller in his area, “Before I tried strip-till, someone told me, ‘Talk to a neighbor to get some advice.’ I don’t have any neighbors doing it. This is why I came to this conference because you are my neighbors.”

[Podcast] Think Bigger than Your Farm with a Strip-Till System

An Organic Mindset with Your Strip-Till System

Don’t Settle for Satisfied with Your Strip-Till System