By Jack Zemlicka posted on May 12, 2015 | Posted in Nutrient Management

SMOOTH STRIPS. Farming 1,800 acres in south central Michigan, Ryan Groholske is accustomed to navigating rocky — though fertile — ground, and moved to strip-till 6 years ago to improve fertilizer placement and broaden his planting window.

Through long-term no-till practices, he’s been able to elevate organic matter content on some sandier soils to as much as 5%, while also creating a thriving habitat for earthworms.

But Groholske wanted a more efficient way to apply fertilizer, and also increase planting flexibility for both corn and soybeans. Six years ago, the Tekonsha, Mich., farmer purchased a 16-row SoilWarrior strip-till unit made by Environmental Tillage Systems.

He says the machine has helped him gradually cut application rates of potash through more targeted placement beneath the soil surface, create a broader planting window and increase strip-tilled corn and soybean yields.

“I can get out and open up the soil a little earlier and plant a little sooner, and my seeds come out of the ground a little faster,” Groholske says. “There’s a definite advantage to having loose dirt that the plant can quickly emerge from and get away from all the troubles that it has before it’s out of the ground.”

Groholske primarily strip-tills in the spring, and for that reason he’s careful with the types of fertilizer he bands in the berm.

With the strip-till rig he applies 270 pounds per acre of a potash, monoammonium phosphate (MAP) and urea blend for corn. Also included is about a ½-pound per acre of Wolf Trax Innovative Nutrients, which includes zinc, boron, copper and magnesium. 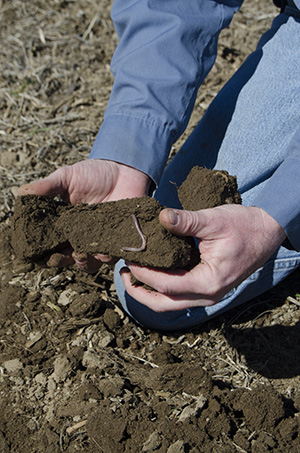 WORM WELCOME. Long-term no-till practices helped boost organic matter and earthworm populations on Groholske’s farm, but he sees strip-till as a way to be more efficient with nutrient application to improve corn and soybean yields.

The banded fertilizer is mixed into the berm, about 3-5 inches beneath the surface. Groholske says he likes incorporating the nutrients into the soil to avoid potential seed burn caused by a concentrated area of banded fertilizer.

“Instead of putting a small, hot band in one spot, the fertilizer is shot down behind the closing discs as the soil is coming up,” he says. “So some of it hits the soil and moves with it and some will end up 5 inches deep. The way my row units are set, maybe 3% ends up on the surface and the majority of fertilizer is in the top 3 inches.”

This gives the strips a “potting soil” texture that is easy to plant into, Groholske says, and gives him confidence that fertilizer is evenly distributed within the 10-12-inch-wide strips.

Through soil samples taken even 2 years, Groholske has identified areas on his field that have ample potassium levels, and he’s dramatically reduced applied amounts with banding in strip-till vs. broadcasting with no-till.

“I’ve probably cut my applied potash by about 100 pounds per acre,” he says. “I’m not seeing any depletion based on soil tests, and I attribute that to the potash being where the plant needs it and uses it.”

Groholske will occasionally supplement his primary nutrient application with the strip-till rig by spreading chicken litter in either fall or spring, depending on the cost. He applies 1 ton per acre to provide about 80 pounds nitrogen (N), 60 pounds of phosphorus (P) and 40 pounds of potassium (K).

Groholske expected the banded application to result in a yield boost, but he was surprised with just how much of an advantage he saw.

“It ended up being about 50 bushels per acre,” he says. “The entire field had chicken litter spread and an equal amount of nitrogen, but having that early package of nutrients placed in the strip probably made the different between 175 bushels and 225.”

He experimented with several different fertilizers and amounts to see which would produce the best results, and to help guide future application decisions. Using the Deere rate controller on his strip-till rig, Groholske varied rates of potash and MESZ in the strip.

“It definitely wasn’t a scientific trial, but where I saw the biggest yield gain was when I applied 100 pounds of potash and no MESZ in the strip ahead of planting soybeans,” Groholske says. “I saw a 5-6 bushel-per-acre advantage in that area compared to the other trials.

“It was a good learning experience and put to rest some of my fears about applying too much fertilizer in my lighter soils and getting the strip too hot.” 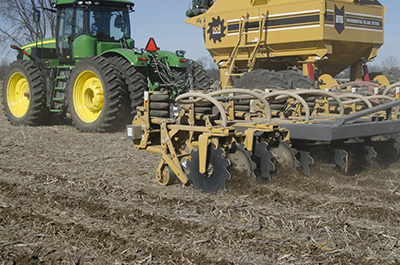 Overall, Groholske says he saw a 2-3-bushel-per-acre yield increase strip-tilling soybeans vs. no-tilling. He attributes part of this boost to more precise fertilizer placement, but also credits strip-till with being able to harvest more soybeans per plant.

“With strip-till, I have a raised berm, so the plants are a little higher than the rest of the ground, especially on top of that corn stubble, so we’re able to cut the plants a little bit lower,” he says. “In the past, if we had a low node, they might end up on the ground, or we’d cut them open with the combine. We’ve got better ‘harvestability’ with strip-till.

While Groholske soil samples every 2 years, he is still trying to figure out the best time to pull samples to get the most useful results.

Sampling in the fall provides a good “report card” as to remaining nutrients in the field, but he’s found that taking a second sample in the same part of a field a short time later can produce a different result.

“It’s peace of mind, but when if you are in school, you like to know if you are failing before the end of the year,” he says. “I want a progress report of my fields throughout the year and I’ve found that tissue sampling is the way to go.”

For the last 2 years, Groholske has used the Climate Corp.’s Climate Pro application to assist in scouting crops, tracking nutrient levels and monitoring weather. In 2014, he enrolled 500 acres in the program.

While he didn’t receive in-crop data until late in the growing season, Groholske says it did reveal an area in one cornfield where operators had under-applied 28% nitrogen.

“We had some wiring issues on one of our sidedress applicators, but when I initially looked at the as-applied maps, everything looked pretty good, so I wasn’t sure if it was just one row or throughout the entire field,” he says. “When we got the Climate Pro maps back, we saw that halfway across the field in either direction is where the malfunction occurred.”

Groholske estimates that the nitrogen deficiency cost him as much as 60-bushels per acre in some parts of the field. He plans to used the Climate Pro platform again in 2015 and hopes to be able to leverage the data to make in-crop decisions.

“With low-dollar corn, I can’t afford to mess up,” he says. “If I can gain 5-10 bushels from a small application of a micronutrient or identify an area where there’s a deficiency, that’s where getting those timely tissues tests done are important. The whole idea of grading myself at the end of the year is yield.”