Quantifying The Value Of Soil Preservation

Levels of soil erosion have decreased in the U.S. and in Iowa, but soil erosion remains a serious problem, especially for some soils.

For the entire U.S., erosion rates dropped from 4.0 tons per acre to 2.7 tons per cropland acres over the same period, according to the USDA’s Natural Resources Conservation Service (NRCS.)

Erosion represents costs to farmers, including lost fertilizer and soil carbon. Erosion also produces costs to society in the form of clogged roadway ditches and increased turbidity in the water that damages fish and increases the need for filtration. The displaced soil in the water also will increase siltation of water-control structures.

These societal costs are borne by taxpayers or society in general. They are “external” to the decision made by farmers.

There is a third category of costs not usually consider in discussions of soil erosion. These are the costs to the landowner caused by a decrease in their asset value. Landowners may be the farmer, but increasingly they are not. In 2007, over half of the farmland in Iowa was rented. In the U.S., 38% of the farmland was rented. 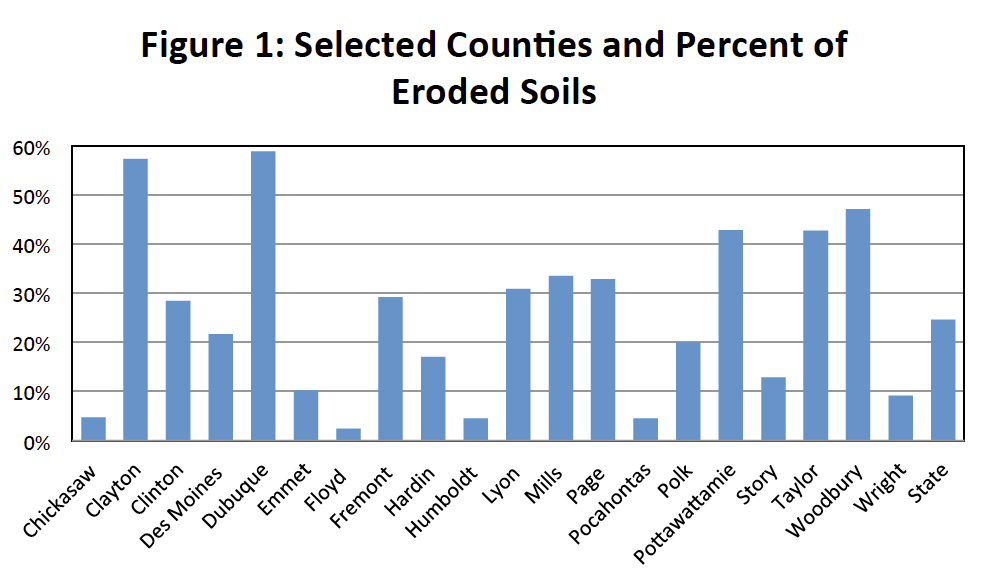 There have been several studies estimating the costs of soil erosion in the U.S. A study by Tegtmeier and Duffy estimated the external costs of agricultural production in the U.S. (primary erosion related) to range from $14.09 to $45.68 per acre in 2002 dollars.

Studies by the USDA’s NRCS have reported that each ton of soil eroded contained the equivalent of 2.32 pounds of nitrogen and 1 pound of phosphorus. The estimated costs per pound for nitrogen and phosphorus in 2011 were $.51 and $.59 respectively.

Using these timates, the cost of the farmer in lost fertilizer value alone is $1.77 per ton of soil loss.

A USDA study estimated that for soils in the Environmental Quality Incentives Program (EQIP), soil erosion was reduced by 8.6 tons per acre. Assuming $1.77 fertilizer value per ton of soil lost, enrolling farmland in EQIP saves a farmer $15.22 per acre.

But the loss of fertilizer represents only a part of the cost to the farmer. There also is a cost to cure the erosion problem. This means adding soil amendments and/or increasing the amount of fertilizer simply to maintain the yields that were harvested before the soil erosion occurred.

Estimating the cost of soil erosion is extremely difficult and subject to a variety of assumptions. It’s especially difficult to estimate the non-market benefits, both locally and nationally.

Maximizing The Value Of Corn Stover