Starting Out In Strip-Till

The 2015 event showcased cutting edge techniques used by top practitioners for attendees to take home to put into practice in their strip-till operations.

Building on the success of the inaugural event in 2014 the 2nd annual National Strip-Tillage Conference, held Aug. 5-6, featured more than 20 presentations and 30 roundtable discussions. The event, held in Iowa City, Iowa, brought together a diverse group of top strip-tillers, consultants and researchers who shared experience-based tips and techniques that both veteran and recent adopters of strip-till can put to work immediately in their operations.

Strip-Till Strategies was on the look out for some of the top takeaways for farmers to consider for their strip-till systems. Here are just 10 of the most talked about tidbits from the conference.

In several different presentations by Kevin Kimberley of Kimberley Ag Consulting out of Maxwell, Iowa, he stressed the importance of letting the soil tell him what it needs. For this, he suggested that a strip-tiller’s best friend is his spade. When digging up a freshly built strip, Kimberley is usually on the lookout for sidewall compaction fractures and voids left along the seedbed. His preferred depth, although it may take some elbow grease, is about 30 inches.

2. Digging Into the Furrow

Digging behind a strip-tillage pass to check for a well-built berm is one thing, but Kimberley is also an advocate of digging up soil behind the planter. He says when examining seed-to-soil contact and planter downforce, it’s important to cut the furrow down the middle. When looking for the seed, he’s sure to carefully trowel the dirt aside with a flat edged tool rather than digging for it with a finger. Often, farmers pack dirt around the seed while looking for it, making them think they have more seed-to-soil contact than they really do.

Kimberley also stressed the importance of knowing where the hardpan is. A simple test for this is running a knife into a wall of the hole at its lowest point and pulling it slowly toward the surface. When resistance is felt on the knife, the farmer can gauge how thick, deep and hard his compaction layers are. Kimberley suggests using the same knife all the time, as a different blade may cut easier and skew results. A tapered blade, like that of a putty knife, works best. 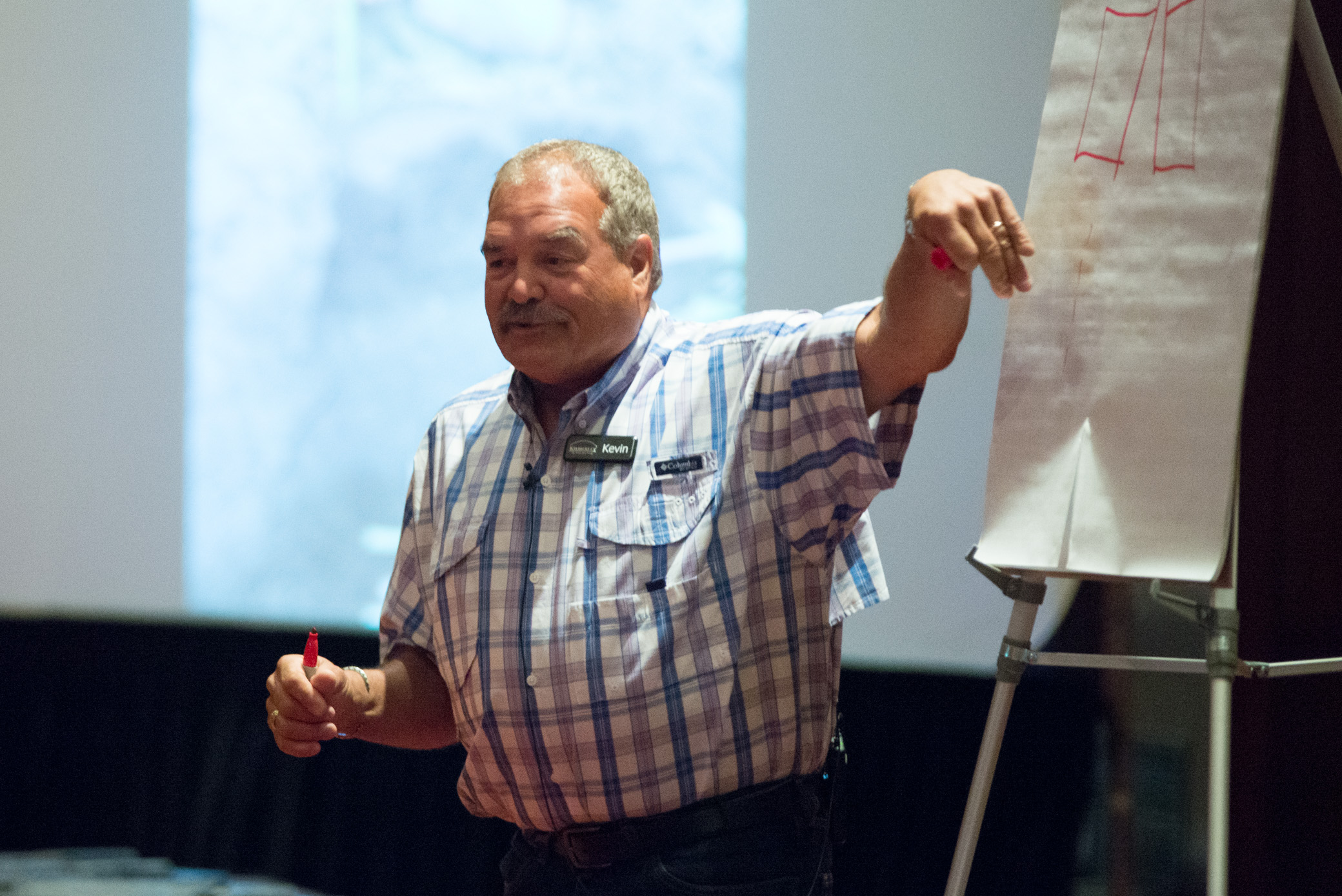 DIG IN. Throughout crop and equipment consultant, Kevin Kimberley’s, presentations he underlined the importance of digging into the soil behind the planter and strip-till bar to examine the strip and furrow farmers are building. By examining what’s happening beneath the soil, he’s helped farmers in 8 states get closer to achieving optimum efficiency in their strip-tilled operations.

West Brooklyn, Ill., farmer Dave Delhotal’s presentation on precision technology and control traffic, championed the difference an implement steering system can make for strip-tillers. On top of almost removing implement drift entirely from the equation for Delhotal, the steering technology also makes it possible to easily match up his 16-row SoilWarrior to his 24-row planter. Using both active and passive systems in his operation, he prefers an active set-up despite the higher price tag. He admits though, that either system is a game-changer for farmers with hills and contours.

5. Sweeten up the Strips

Bill Darrington, who’s been strip-tilling and no-tilling in western Iowa since 1987, focused on a ground up perspective in his general session. Though the presentation touched on many salient points about soil health, he said that if attendees could walk away with only one idea, it’d be to add some sugar into their fertility mix. Darrington says that every time he goes across the field, no matter the reason, he applies 1 pound of sugar per acre. He says that for $0.75 an acre, it’s a bargain for the increased nutrient uptake and energy source it provides for microorganisms. To further emphasize the point, he shared an anecdote about a time when he ran out of sugar. In the pinch, he bought out the local grocery store’s supply of RC Cola and added that to his mix.

“I think it worked great,” he says. “Think about what’s in soda — carbon dioxide, sugars, phosphoric acid and caffeine.”

6. Being Wary of Anhydrous

In terms of soil health, Darrington also noted that anhydrous ammonia may not combine well with strip-till. After using it for a number of years himself, a few dig tests revealed that it was contributing to a large compaction layer.

“We dug about 8 inches down and there was a big shelf — it was like a piece of plywood wedged into the profile,” he says. “Anhydrous kills biology, knocks out the calcium and sterilizes the soil. In my opinion, anhydrous and strip-till just do not fit. There’s chance of volatility.”

7. Banding Nutrients Should be a Priority

Darrington saw the conference as an opportunity to share ideas in an open-minded environment because there are many ways to get great results from strip-tilling. However, he says when it comes to banding nutrients, he becomes a bit opinionated.

Darrington feels that if it’s done correctly, banding nutrients can result in a 25-30% overall reduction in overall application rates, making it that much more efficient.

During a roundtable discussion on picking the right cover crops for a given strip-till operation, many farmers sang the praises of cereal rye and radishes. While quantifying the exact payback of the practice was difficult, none said that cover crops weren’t worth it.

There were widespread nods of agreement when a strip-tiller from the Chesapeake Bay watershed noted that adopting cover crops now and getting the hang of them is wise because they may one day become part of legislation aimed at sequestering nitrates.

Grand Marsh, Wis., strip-tillers, Eric and Megan Wallendal gave a presentation on variable rate technology and explained how they save about $1,000 per field variable-rate applying potash.

“It cost us $2 per acre to get our field maps, so the investment has paid for itself,” Megan says. “A lot of farmers want to know what we’re doing with our Veris maps and setting up management zones based on those zones and when I tell them we’re saving about $10 per acre on a 100 acre field, they get really interested.”

Mike Petersen, lead agronomist with ANP Inc., recommended applying 30-50% of the needed fertilizer with the strip-till during his general session on smart fertility programs. Petersen says that product type and placement can have a heavy impact if it’s not well thought out.

“Many times, you’ll have to do a fall application, because we know how our soil conditions can be in the central and eastern part of the Corn Belt,” he says. “Be smart about it. If you are going to use dry fertilizer, use products like ESN — a coated product that is going to last.

“When you are looking at liquid products, don’t place it too deep, because then you are going to lose it.”