SLOWING DOWN. Delaware strip-tiller Brad Ritter bought a 6-row Kuhn Krause Gladiator when he adopted strip-tillage about 5 years ago. Although it’s performed well for him, he has noticed that the chains on the baskets in the back seem to wear out often. Slowing down from 5.5 mph to 4 mph has mitigated the issues and helped him build better strips, but he hopes to eventually replace the chains with bars.

Harbeson, Del., farmer Brad Ritter, converted from no-till to strip-till about 5 years ago on his 1,000 acre family farm. He’d long thought that no-till was the most logical method of farming his sandy soil, but he lamented the idea that a portion of his broadcasted fertilizer probably ran-off to the Delaware Bay rather than into the root zone of his crops.

From the moment his first dragged a strip-till bar across one of his fields he immediately recognized the increased efficiency, economic and conservation benefits that the minimum-tillage practice could offer.

“We don’t have nice, heavy soils that hold the fertilizer in really well,” says Ritter. “With strip-till, I’m putting the fertilizer right in the root zone where it’s less likely to wash away or leach. We gave it a trial run on some corn at first and even without using RTK initially, we saw more than a 10 bushel per acre yield advantage.”

Ritter and his two sons, Adam and Aaron, got to work implementing strip-till on their corn acres, but hope to further incorporate the practice on a diverse crop rotation that includes soybeans, vegetables, sweet peas, black-eyed peas, lima beans and wheat. After purchasing a 6-row Kuhn Krause Gladiator, Ritter transitioned all of his roughly 600 acres of corn over to strip-till.

He builds all the strips in the spring 8 inches deep — applying 50 gallons per acre of 10-2-10 (a liquid nitrogen/phosphate/potassium mix) through the bar. After planting, he variable-rate sidedresses nitrogen based off tissue tests. After a few short years, the change has had operation altering results on the farm.

“I’ve been seeing the corn tap roots go straight down into the strip rather than spreading out horizontally like I saw with no-till,” Ritter says. “A stronger stand is a great thing in this area because the wind can get really bad and down the corn.”

Coming from no-till, he often saw some uneven or weak emergence — but with strip-till he feels he’s getting the best of both full tillage and no-till. 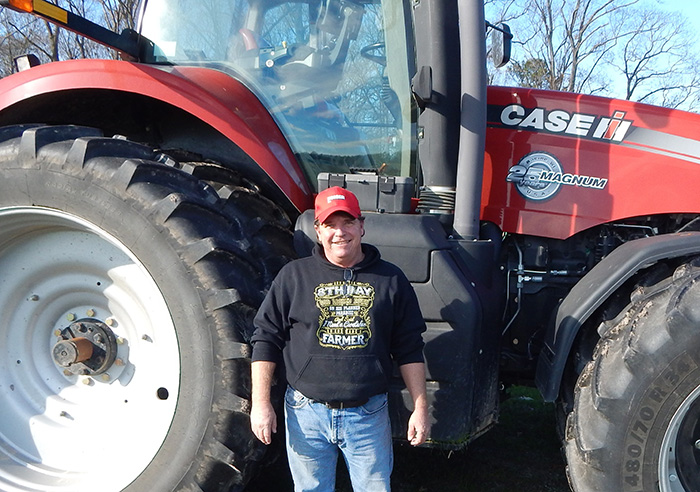 LESS STRESS. Since carrying strip-tillage over to his black-eyed peas, Ritter has been able to reduce the amounts of trips across the field and also retire his chisel plow. Less stress on the tractor translates into a longer tractor life and fuel savings.

“The emergence is really strong, early and consistent,” says Ritter. “If the crop isn’t coming up pretty much uniformly, some of the plants will basically come up as weeds. They’ll suck up fertilizer, but won’t produce.”

Ritter is also confident that he’s seeing a bigger return on his inputs, and even starting to see the opportunity to dial back fertilizer rates in certain spots.

“We still do broadcast our potash, but we’ll spread about 90 pounds per acre and apply the rest in the strip,” says Ritter. “We used to spread about 150 pounds, but when we got heavy rains, I’m sure a lot of it was washing off.”

Most surprising to Ritter though has been the yield increases. He admits that high-yielding hybrids and good weather can certainly take some of the credit, but he says strip-till has contributed significantly to a recent yield surge.

“Last year was the first year I ever saw 300 bushels on the yield monitor,” says Ritter. “We’ve had great weather too, but our overall average corn yields have increased somewhere by close to 30%. The fertilizer is right where it needs to be, our organic matter has gone up by a point or so and the soil in the strip is so mellow that the roots shoot straight down.”

HITTING THE FIELD. Ritter’s dealership, Hoober Inc., stopped out last year on his farm and grabbed some action footage of his Case IH 290 dragging the 6-row Kuhn Krause Gladiator across the field. Video courtesy of Dave Wharry, Hoober Inc.

Such is Ritter’s enthusiasm that he’s set a goal to eventually incorporate strip-till on all his crops. This is partly because he’s hoping to save man hours in prepping the ground.

A uniform approach across his operation would enable him to cover more acres faster without stopping. However, he’s also set the goal because he’s seen the benefits carry over to black-eyed peas.

Three years ago, Ritter started strip-tilling all 100 acres of his black-eyed peas. In the peas, which he plants right after corn in early May, he saw the opportunity to warm the soil up faster in the spring. Also, like with his corn, he liked the idea of building a strip for the peas to send their tap roots into.

“Black-eyed peas are similar to soybeans in that they’re like a scavenger so they don’t need much fertilizer,” Ritter says. “The strip-till placement does help a lot though. We apply about 25 gallons per acre of 10-2-10 through the strip-till rig,” says Ritter.

It’s taken a bit of learning on the job, but after some tweaks he trusts his system enough now to retire his chisel plow. The first payback came in the form of saved trips across the field. 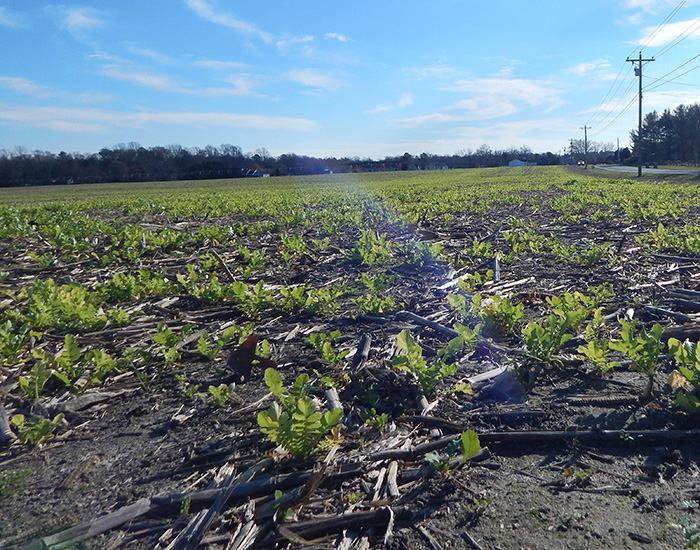 WARDING OFF WEEDS. Ritter hopes to incorporate strip-till on all of his crops, but with his lima beans and vegetables he’ll have weeds to contend with. Without chisel plowing or vertical tilling his options for weed control become more limited.

“In the past, I would chisel plow, come back and disc it, spray, disc again to incorporate the fertilizer, plant and then come back and spread potash,” says Ritter. “But now, I can just come in and burn down the weeds with Round-Up, strip-till and fertilize, plant and spray.”

Less stress on the tractor is one thing, but he knew he was on to something when he saw how yields responded to the new practice.

“We saw our black-eyed peas yield about 4,000 pounds per acre this year, which for peas is a pretty good yield,” says Ritter. “But the thing is, they were on dryland acres. A nearby farmer growing black-eyed peas on irrigated acres only saw about 4,200-4,300 pounds per acre. They have subsurface irrigation and for our yields to be that close without extra water was a surprise.”

Encouraged by the results, he looks forward to strip-tilling the rest of the farm, but he’s apprehensive about some of the trade-offs he’ll have to make. Chisel plowing or vertical tilling helps combat weed pressures that he may struggle with if he completely phases out those tillage methods.

“I’ve tried strip-tilling some lima beans, and I’ve been kind of scared to do all of them,” says Ritter. “The difference has been more subtle than with corn and black-eyed peas. I don’t have much I can fight weeds with and that’s the problem with the vegetables too. What I am doing now is making a few passes with a Great Plains Turbo-Max and then planting, so I’ll have to find a way around that.”

Combining Experience with Experimentation for a Progressive, Profitable Strip-Till System