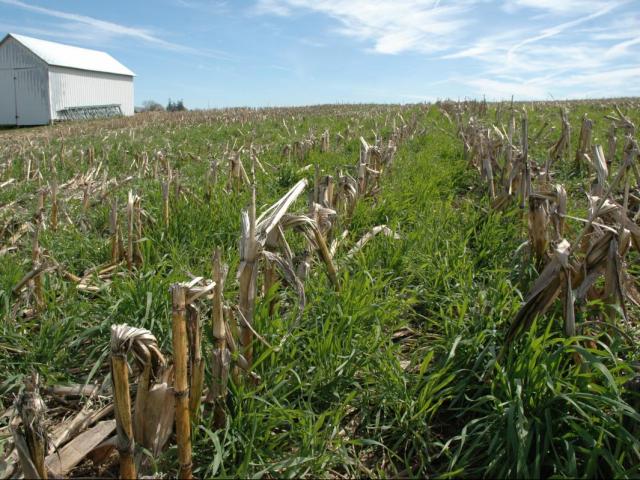 Cover crops provide multiple benefits with regards to protecting soil from erosion, improving soil health and as a component of a nutrient management plan. For those cover crops that overwinter and resume growth in the spring, such as cereal rye and annual ryegrass, an important question is: When do I terminate the cover crop?

That decision should consider the next crop, planting date of that next crop, the spring weather pattern and purpose of the cover crop. For cover crops that have not been planted with the intention of providing a forage harvest, and are on acres intended for corn grain production, this may be a year to consider early termination of that cover crop.

I have talked with several farmers who tell me that our soil moisture is drier than average. If this pattern holds, the risk is a cover crop can take up moisture that should be saved for the cash crop. At the recent conservation tillage conference in Ada, Ohio, I saw data that showed lower corn yields following cover crops in dry years when those cover crops were not terminated early enough. Those cover crops robbed soil moisture leading to delayed germination and slower development that was not made up compared to a corn crop planted with no cover crops or planted into a winterkilled cover crop.

Given the risk of or the potential for a drier-than-average spring and summer, cash grain corn producers should consider terminating cereal grain and annual ryegrass cover crops in the late March to early April time frame. Ideally, we would like to see less than 8 inches of growth for either of those crops. I have read several sources that recommend annual ryegrass be terminated at 6 inches or less of growth. The recommended method for early termination is the use of herbicides.

Mark Loux, Ohio State Extension weed specialist says that the Sharpen option only needs to be used where there is a desire for burndown help with marestail or other weeds. The advantage of using Sharpen for this purpose in the tankmix is that it won't reduce the glyphosate activity, which can happen with atrazine or 2,4-D in the mix. Loux’s recommendation is to use a minimum of 1.5 pounds of acid equivalent per acre of glyphosate for cover crop termination and only include Sharpen if marestail control is needed. This article from 2015 talks more about cover crop burndown.