A 4-year UNL cover crop research project is exploring whether winter cover cropping in no-till corn and soybean systems (continuous corn, soybean phase of rotation, corn phase of rotation) in Nebraska can benefit soil quality despite their short growing season. Because changes in soil physical properties can take several years to occur, we are growing winter cover crops in the same plots for four consecutive years (2014-2017).

Changes in water infiltration, bulk density, and particulate organic matter among treatments will be measured in the last year, however, data on cover crop biomass production in the first two years is now available.

Cover crops were planted at four University of Nebraska–Lincoln research sites near Mead, Concord, Clay Center, and Brule. These sites represent the temperature and precipitation gradient across Nebraska.

Fall biomass in 2014 was not measured, but due to the late planting dates, there was little cover crop growth. In the fall of 2015 biomass production of early-planted cover crops was measured after the first killing freeze. Above-ground cover crop biomass was cut, dried to constant weight and weighed, and all biomass weights given here are dry matter weights.

Cover crops in late-planted plots were at the cotyledon stage(legumes) and 1 to 3 leaf-stage (rye and brassicas), too little biomass for sampling. Early-planted cover crops had between 35 days (Brule) and 71 days (Mead and Clay Center) of growing time. Consequently, biomass production was very low at Brule with less than 60 lb/ac. 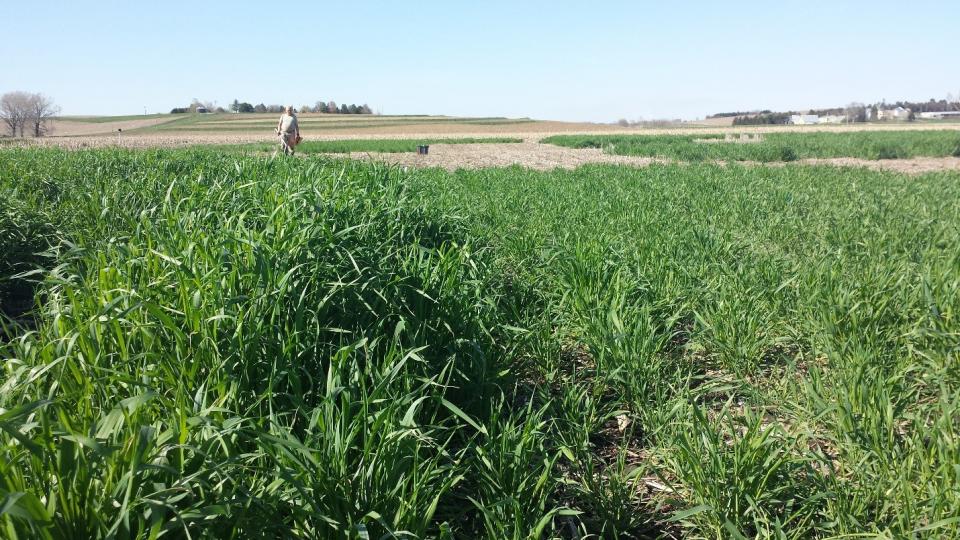 At Mead biomass production was highest, with up to 700 lb/ac for rye, and all other cover crop treatments producing 200 to 400 lb/ac. In Clay Center and Concord, rye, radish and the mixes produced 100-300 lb/ac, while legumes always produced less than 100 lb/ac.

Species contributed differently to the total biomass of the mixes: In the seven-species mix, about 65% of total biomass was from grasses (mostly oats), 20% from brassicas, and 15% from legumes (mostly pea). In the four-species mix, rye made up about half of the biomass, radish about one third, and legumes the rest.

Radish and oats frost-killed, but rye resumed growth early in the spring. Spring cover crop biomass was measured just before termination, two weeks ahead of the planting the next crop. Soybeans were planted later than corn at Concord, Clay Center, and Mead, giving cover crops prior to soybean extra time to grow. These two to three extra weeks resulted in up to 2,000 lb/ac more cover crop biomass.

We expected early-planted cover crops and the most diverse cover crop mixture to have the highest biomass yields. Early planting resulted in higher cover crop yields in both years and at all locations (Figure 1) except Clay Center, where late-planted cover crops were more productive in 2015. Late planting was done by drilling, and the better seed-soil contact resulting from drilling may have been beneficial in drier soils.

Rye produced the most biomass of all cover crop species, both when planted early and when planted late. In 2015, early-planted rye biomass was highest in Concord (1,800 lb/ac), intermediate in Mead and Clay Center (up to 1,400 and 1,000 lb/ac, respectively) and lowest in Brule (100 lb/ac).

Cover crop biomass was much higher in 2016, with up to 4,800 lb/ac in Concord, 3,900 lb/ac in Clay Center, 2,400 lb/a in Mead (Figure 2) and 300 lb/ac in Brule (Figure 3). Cover crops before soybean typically had the highest biomass production, since they were terminated later than the cover crops before corn (except at Brule). 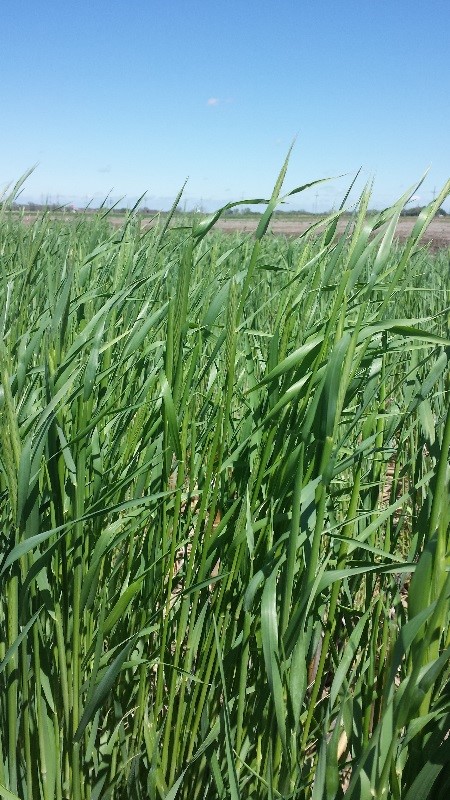 Contrary to our expectations, the four-species and seven-species mixes did not produce as much biomass as the rye. In Concord and Mead both mixes reached only 1,000 lb/ac in 2015 and had even less biomass in Clay Center and Brule. In 2016 early-planted mixes yielded 1,000-2,000 lb/ac at all locations except Brule and were highest at Clay Center with up to 2,300 lb/ac (Figure 4). Despite a relatively even distribution of species in the mixes in the fall, 90%-100% of spring biomass was from rye.

The legume mix had the least biomass, on average about one-tenth the biomass of rye. In Brule, there was practically no legume growth in the spring, probably due to the late planting dates and cold dry winters. The highest legume biomass amounts (400 lb/ac) were at Clay Center and Mead in 2016 (Figure 5), in plots before soybean.

Frost damage was observed in pea after the winter, especially in areas with colder winters (Concord). At this site hairy vetch contributed 87% of the biomass in the legume mix compared to 65% at Clay Center. In previous studies in eastern Nebraska, hairy vetch broadcast into senescing corn and terminated in early May produced 400-1,200 lb/ac of biomass (Power et al., 1991). We used relatively low seeding rates which could explain the low legume biomass in our study.

At termination in 2016, rye was heading at all locations except Brule, but was killed with one or two applications of glyphosate. Hairy vetch was more difficult to control and survived glyphosate application in several plots. Cover crop plots were planted to corn and soybeans about two weeks after termination.

The thick rye residue probably delayed some weed growth early on. Corn and soybean plants appear smaller in the rye plots, possibly an effect of nitrogen immobilization. We will wait for harvest data to see if the cover crops impacted corn and soybean yields.

In our study to date, cereal rye was best suited for winter cover cropping in corn-soybean systems. Cover crop mixes had no benefit over the cereal rye in terms of biomass production.

Rye outcompeted the other species in the mixes. Hairy vetch and Austrian winter pea did not perform well. 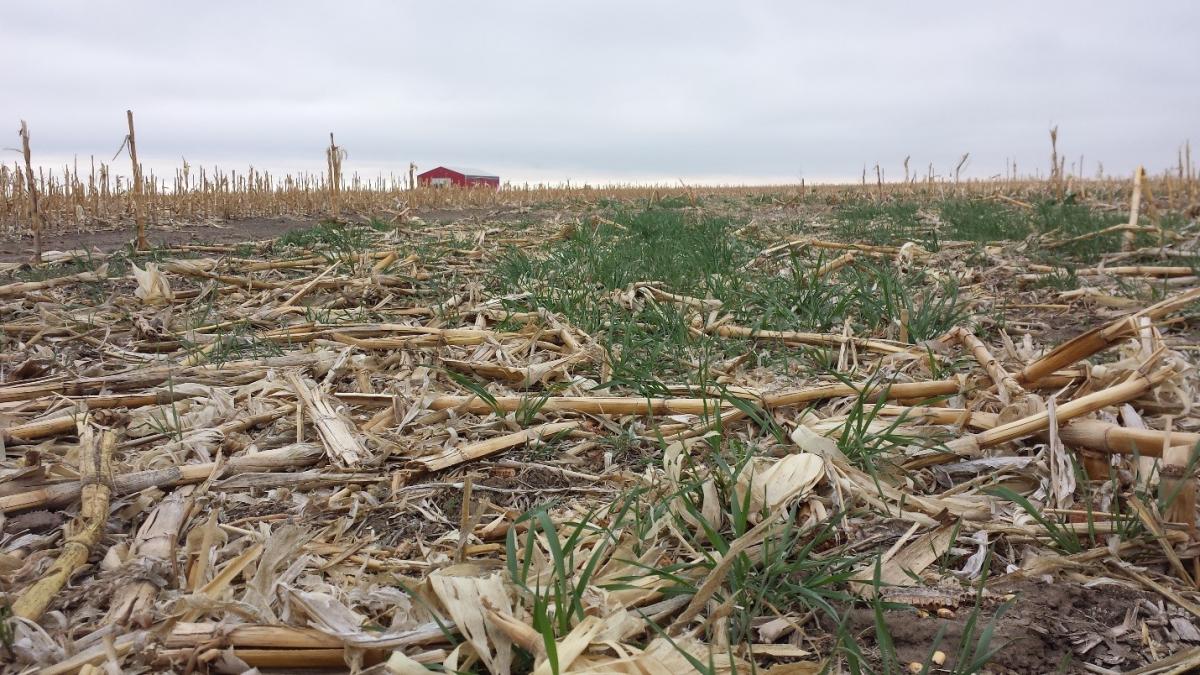 However, legumes and brassicas bloom in the spring and provide food for pollinators which might be a desirable attribute for some farmers. For the highest biomass production, planting early and terminating late (such as when planting cover crops before soybeans) is important.

Cover crop carbon and nitrogen content, soil moisture, and corn and soybean yield data from the first two years will be available later this season in CropWatch.

Biomass is Key to Weed Suppression with Cover Crops