Biomass is Key to Weed Suppression with Cover Crops

One important benefit of cover crops to our production system is providing an alternative selection pressure on weed populations. Cereal rye has the best potential to suppress weeds because it accumulates more biomass than other cover crop species.  Weed suppression is closely related to the amount of biomass at the time of termination (Figure 1). 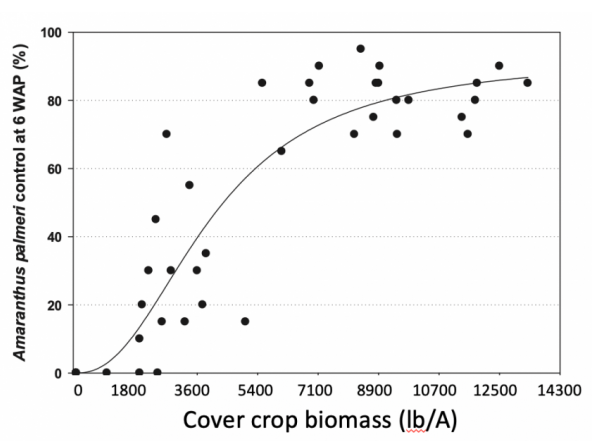 The importance of biomass on weed suppression can be easily observed in a demonstration evaluating suppression of waterhemp by cereal rye developed for the 2020 Farm Progress Show. Treatments represented no cover crop, an early termination when rye was 6-8 inches tall (900 lb/A), and late termination when rye was flowering (10,000 lb/A1). Three weeks after planting there were dramatic differences in both waterhemp emergence and growth. The low rye biomass treatment reduced waterhemp growth more than it did emergence, whereas the high biomass treatment dramatically reduced both emergence and growth. Waterhemp emergence was delayed more than two weeks in the high rye treatment compared to the 0 and 900 lb rye treatments. In the high residue treatment, waterhemp seedlings had to navigate through an inch of mulch to reach full sunlight.

Many factors influence the biomass produced by cereal rye, most important are planting date and termination date. Rye's tillering ability reduces the importance of seeding rate except in situations with late planting.  A minimum seeding rate of 1-1.5 bu/ac is typically recommended. Increased seeding rates will provide more consistent stands when rye is seeding using an airplane or other broadcast methods, as well as when seeding occurs in October or later.

For most farms, cover crops provide an opportunity to achieve more consistent weed control and lower selection pressure for herbicide resistance, rather than allowing significant reductions in herbicide use. Farmers desiring to reduce herbicide use must manage the cover crop to maximize weed suppression. Target early seeding dates, typically before late September. Seeding with a drill typically results in the most consistent stand across crop fields. Termination timing should be delayed past mid-May to ensure rye biomass is maximized for the most persistent weed suppression.

110,000 lbs/A of rye biomass is higher than typically achieved in Iowa. The rye was drilled after harvesting corn for silage, and termination was delayed until mid-May.

Getting Out of the Rut with Cover Crop Interseeding, Weed Suppression