By Ian Gronau posted on February 9, 2016 | Posted in Nutrient Management

Nancy and Jerry Ackermann have been strip-tilling corn and no-tilling soybeans and alfalfa on their 1,200-acre farm in southwest Minnesota for 15 years. Coming from conventional tillage practices, the transition began on a small 50-acre test plot.

“We were getting started right around the same time our co-op was using the new AGCO variable-rate spreaders,” says Jerry. “We had a friend mention that we ought to try strip-till that year too, so we were tested both.

The strip-till test and the variable-rate test both showed an 8-9-bushel corn yield advantage. The Ackermanns ran the tests again over the next few years and found that although both boosted yield, the variable-rating was actually costing them $15-$18 more per-acre in fertilizer when they followed the recommendations.”

At the time, the Ackermanns decided to suspend variable-rate spreading but continue with strip-till, which was paying an immediate dividend.

“The first year we implemented strip-till across 100% of our corn and no-till on our soybeans and alfalfa, we cut our fuel bill in half,” says Jerry. “At the time variable-rate spreading wasn’t worth it, but now, of course, variable-rate application through the strip-till rig is available, which has been working great for us for the past 3 years or so.” 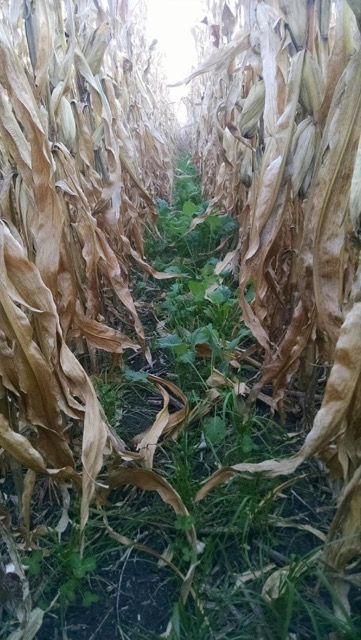 DRINKING UP N. Minnesota farmers Nancy and Jerry Ackermann have found that by using cover crops, they can continue to dial back their nitrogen rates. Their preferred method of planting the cover crops is interseeding shortly after sidedress.

Strip-tillers who invest in a rig can often see savings through fuel and reduced tractor wear-and-tear, but the Ackermanns, who have their tillage work custom done, saw savings specifically in the rates they were paying to have the work done.

“We had to look at it from the economics of it,” Jerry says. “Iowa State University puts outs average custom rates for the Midwest and I’ve quoted them. Just straight chisel plowing is $16 per acre for one pass, hiring the co-op to spread our fertilizer would cost $8.50 per acre and one pass with the field cultivator would cost $14 more per acre.

“That’s already $38.50 per acre. I’m paying the co-op $20 per acre to have a strip-till pass done and then I’m ready to plant, so I’m ahead of the game already by $18.50 per acre. I think we’re going to see more people turning to strip-till just simply because of the tight margins we have now.”

The byproduct of having so many acres custom strip-tilled is having to make use of a mix of different machines with different row counts running, sometimes at the same time, across the field. However, the Ackermanns say that with the adjustability of newer rigs and RTK to match the strips tightly to their planter, it’s become less of an issue each year.

“The 2 nearby co-ops have 24-row rigs and among nearby farmers, there are three 12-rows, a 16-row and a 6-row and a variety of brands,” Jerry says. “They can all run at different depths too, but we have everyone adjust to 6-8 inches on our farm. We’ve watched carefully to see if one brand builds better strips, and to be honest, at harvest we’ve seen little to no difference between the brands.”

Another reality of running several different rigs is keeping all the fields on the same page as far as fertilizer is concerned. This however, has become a sort of personal crusade for the Ackermanns, who’ve had a lot of success lowering their rates over the past few years.

“Originally, we used anhydrous in the fall, but we had some dry falls and wet winters, so we felt like we were losing too much,” says Jerry. “The co-op would just say to put on another 30 pounds because it was still cheaper than changing the product. Eventually we had to stop and ask ourselves why we were wasting so much. Plus, I think we’re all going to be held more accountable for the nitrogen that leaches off our farm very soon.”

“I think we’re going to see more people turning to strip-till just simply because of the tight margins we have now.” — Jerry Ackermann

When the Ackermanns first decided to switch N products they transitioned to urea with a stabilizer banded 6 inches deep. Over time, their system evolved further to include ESN Smart Nitrogen in a split application.

“Instead of putting all our N on in the fall, now we put down 30-40 pounds of variable-rated urea with a stabilizer and ESN, plus our sulfur, phosphorus and potash — all of the rates are based on grid sampling,” says Jerry. “The ESN is more expensive, but our tests show that we see a lot less leaching. Then in the spring we put on another 5 gallons per acre of 10-43-0 with zinc, in-furrow during planting, and a final application of 32% at sidedress during V4-V6 stage.”

The Ackermanns feel strongly that because of the advantageous fertility placement that strip-till has offered them, they’ve been able to dial down their rates significantly. They are hoping to soon be able to consistently produce 200 bushels of corn per acre on 140 pounds of N.

“When we still used anhydrous, we went by the old rule of thumb: 1 to 1.25 pounds per bushel. Then, of course, the recommendation to add an extra 30 pounds because you were sure to lose some over the winter,” says Jerry. “Now, because of the better products, strip-till placement and split up applications we’ve been able to bring it down close to our goal of 140 pounds per acer while still maintaining an average of 190 bushels per acre. With the way things are going, cover crops may help us bring it down even further.” 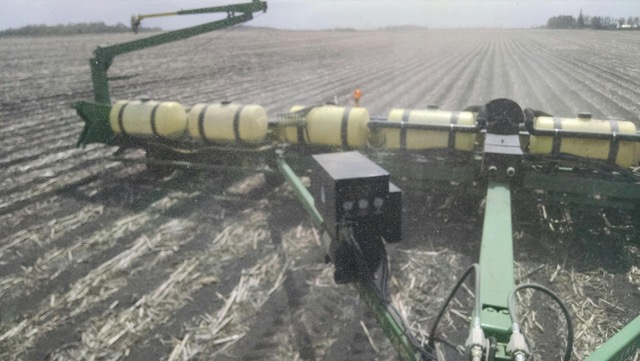 SPLITTING APPLICATION. The first step in reshaping the Ackermann’s nitrogen application program was when they switched to urea with a stabilizer and ESN Smart Nitrogen from anhydrous in the fall. The second was to stagger applications. They now apply 5 gallons of 10-34-0 and zinc in-furrow with the planter and a variable rated 32% sidedress application at V4-V6.

During the past 3 years, the Ackermanns have been implementing large scale cover crop experiments to grab any extra N that may be leaching. After testing a variety of application methods including airplane seeding, helicopter and drilling after harvest, they’ve determined that interseeding works best for their operation.

“Using a helicopter is nice because you can land right on the road and fill it up, but it’s expensive,” says Jerry. “Drilling after harvest is nice too, but in our area we just really don’t see enough growth that late to make it worth it.

“We interseed shortly after sidedressing now, and it works really well. We’ve tried cereal rye and radishes and like them for their ability to scavenge up any leftover N, and we’ve also seen annual rye work really well in corn, because it can handle growing in the shade of the corn as it gets taller.”

As an added bonus to retaining N, recent tests with his local watershed has also revealed that the combination of strip-tillage and cover cropping is having a positive effect on the Ackermann’s water infiltration rates and a reduction in ponding.

“EPA funded tests through our watershed showed that my soil could take 8 inches of rain in an hour before it started ponding,” Jerry says. “That was backed up too when we got 6 inches of rain over a few days and nearby farms still using conventional tillage had huge ponds. It went straight into our soil, even where we’d had trucks drive in and out of the field.”