Steven Eckhardt started strip-tilling on his family farm about 50 miles northeast of Denver, Colo., just over a decade ago. He farms over 3,000 acres of corn, sugarbeets, wheat, alfalfa, edible beans and onions.

When he first came across the strip-tillage method at a farm show in nearby Sterling, Colo., the potential benefits leapt out at him. He introduced strip-till on his farm with his first 8-row Orthman 1tRIPr in a limited capacity the first year. But before long, the benefits convinced him to adopt the practice on almost all his acreage.

“We hardly plow anything anymore, but we still do a little as needed on onions and some of the beans,” says Eckhardt. “Strip-tillage works great in our soils that vary from heavy river bottom to sand, and it simplifies all our processes. Not only are we able to get everything planted sooner, but with the help of one less employee. We were also able to add another 700-800 acres.”

Eckhardt says he’s able to respond to Colorado’s sometimes unpredictable spring weather faster and more effectively with strip-till. Often experiencing spring storms that can keep him out of the field, he feels that strip-tillage has enabled him to make better use of the brief windows that are open to complete field operations.

“We’re just not as vulnerable to spring storms that come through. We can have 30 inches of snow hit us in April when we should be working,” says Eckhardt. “With strip-tilling, we can get fields dried out quicker and with less steps in the tillage process, we can focus on getting a crop up.” 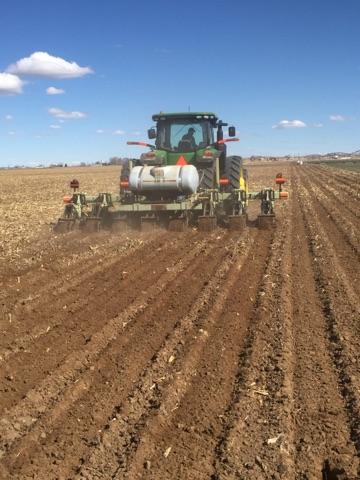 SEASONALLY SUITED. Colorado farmer Steven Eckhardt says he’s able to respond to his region’s sometimes unpredictable spring weather faster and more effectively with strip-till. Getting his sugarbeets planted and germinated in a tight window is especially important when he can easily get 30 inches of snow during an unexpected April storm. Photo Courtesy of Steven Eckhardt

The majority of Eckhardt’s acres — 1,500-2,000 acres depending on rotation — is corn; half silage and half grain. Although he’s seen fuel savings, time savings and a consistent 10-15% yield bump, he feels that his 450 acres of sugarbeets have responded especially well to strip-tillage.

“When we first started strip-tilling sugarbeets we only tried about 10% of the ground,” says Eckhardt. “We were hesitant at first because sugarbeets are particular about seed-to-soil contact. We thought the soil might be too loose or lofty to have tight contact for the seed to germinate.”

But it ended up not being issue. They even tried running a Schmeiser metal ringed roller to pack it down and it ended up being unnecessary Within a year or two, they started strip-tilling 100% of the sugarbeets.

As with the other crops, strip-tilling sugarbeets offered Eckhardt a chance to respond better to unpredictable weather conditions.

“If we can get sugarbeets up and going for a bit in a warm period they can withstand temperatures down into the mid-20s,” says Eckhardt.  “But if they are exposed to the cold too early while they’re trying to come up, it’ll kill them.”

The compaction reduction has also been instrumental for Eckhardt’s sugarbeets. Before he started strip-tilling, he used to run a deep ripper through the sugarbeet ground every other year to cut through compaction layers and create the proper environment for the crop’s root structure. He’s been able eliminate the entire ripping process, and he’s seen the sugarbeet’s roots grow even deeper. 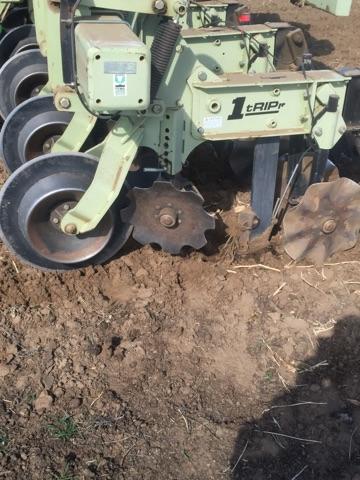 CUTTING THROUGH COMPACTION. Eckhardt used to have to run a deep ripper through his sugarbeets every other year so the crop’s taproot could find its way through the plow pan. Not only has his sugarbeet’s root structures responded well to the soil conditions strip-tilling provides, but he has also been able to entirely do away with the deep ripper pass. Photo Courtesy of Steven Eckhardt

“It’s amazing to see their root structures completely fill the strip,” says Eckhardt. “We’ve done a lot of digging post-harvest to see how far the roots go. Sugarbeets have a big taproot and sometimes go down 8-10 feet.

“We just don’t get the same beet development if the roots get pinched off at the plow pan. Strip-tillage rips up that plow pan just enough to get a perfect root structure that can poke through the layers instead of getting pinched.”

This simple difference has led to a healthier, more robust crop — even a higher yield.

“We’re able to harvest sugarbeets with the tail still on them because the bottoms don’t get pinched off. That’s huge for beets. It ends up being another 5-7 tons per acre and around a 20% yield increase,” he says.

In past years, sugarbeet cyst nematode has been a persistent and yield sapping pest for Eckhardt. Broadcasting fumigant would usually cost him around $200 per acre, but it was seen as a necessary expense. However, this is yet another process that strip-tilling has changed for him.

“We’re actually able to fumigate right through the strip-till bar,” says Eckhardt. “We use the lower port on the ripper for the fumigant and it leaves the ground in absolute perfect condition. We don’t have clods and there isn’t a lot of trash in the strip, plus the rollers on the bar seal up the top of the strip.

Eckhardt says the soil structure and seal that his strip-till unit helps build creates an environment for the fumigant to more thoroughly treat the most important part of the future root zone. 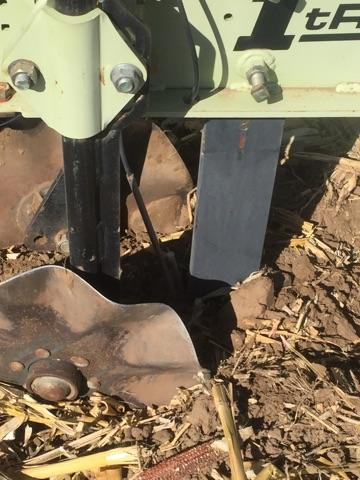 FULLY FUMED. Eckhardt says he prefers running sugarbeet cyst nematode fumigant through the strip-till bar because it helps properly deliver the product to the root zone. The liquid rests at the base of the strip and as it fumes for about 10 days, is rises as a gas uniformly through the strip’s textured soil — treating 100% of the root zone. Photo Courtesy of Steven Eckhardt

“The fumigant lays at the bottom of the strip where it needs to be and the soil comes around on top of it. As it fumes for about 10 days, the liquid turns to a gas and rises up,” he says. “Because the row unit gives the soil in the strip such a great texture, when the fumigant gasses, it’s able to rise up uniformly and hit 100% of that tilled area.”

Not only does Eckhardt feel that the strip-till bar delivers the fumigant in a superior fashion, but it’s $80-$90 cheaper per acre than broadcasting was in the past, and it saves him yet another trip across the field.

Eckhardt bands 80% of his total nitrogen (N) program through the strip-till unit in the form of 32%, running the shank 10-12 inches deep. The total program is around 100- 120 pounds of N per acre plus spread feedlot manure, depending on soil tests. He applies the rest through starter fertilizer, sidedressing and fertigation.

“We have pretty big leaching problems here so we try to bottle feed our crops,” says Eckhardt. “For the sugarbeets, we put in a starter with about 10 pounds of sulfur. We’ve actually been able to dial back on the rates for sugarbeets.”

Since strip-tilling has allowed them to get the sugarbeets planted fairly quickly after tilling and they haven’t had any problems with burning, the Eckhardts backed off the starter fertilizers by half.

“The strip-tilled N placement works great with the sugarbeets because they can get ahold of it soon enough so they don’t ever want for anything,” he says.