Distribution of the Brown Marmorated Stink Bug in the U.S. as of January 3, 2017. Map from stopbms.org.

The invasive Brown Marmorated Stink Bug (BMSB), Halyomorpha halys, is currently distributed in 43 U.S. states and four Canadian provinces. It is a severe agricultural pest in nine states (largely in the Mid-Atlantic) and a nuisance problem in 21 others.

BMSB is considered to be a landscape-level threat. This means that adults frequently switch between cropped land (agronomic crops, fruits, vegetables, ornamentals) and wooded habitats.

BMSB has been reported to be in Missouri since 2013. While BMSB does not seem to have reached damaging populations yet, numbers have been increasing year by year as a result of breeding populations reported in Ferguson/St. Louis area in 2015, and the continued risk posed by dissemination via hitchhiking on vehicles. Therefore, farmers of specialty crops are encouraged to monitor for this invasive pest, especially if you live in the St. Louis, Springfield and Kansas City areas. 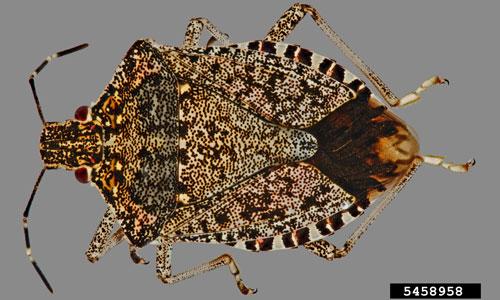 Where does BMSB spend the winter?

During the winter months BMSB enters a type of hibernation called diapause. During this time they do not feed and do not reproduce. Overwintering takes place in forested areas as well as inside houses and other buildings. In the spring, BMSB adults emerge from overwintering sites (houses, barns, storage buildings and dead trees) and become active on nearby crops during warm sunny days. In the spring and throughout the summer, adults feed, mate and lay eggs.

Crops Being Attacked by BMSB

Both adults and nymphs (immature stages) are known to cause feeding damage to crops. BMSM has a wide host range of over 300 plants. BMSB nymphs and adults feed by inserting their piercing-sucking mouthparts into fruit, nuts, seed pods, buds, leaves and stems and appear to prefer plants bearing reproductive structures. Their mouthparts can penetrate very hard and thick tissue, such as the hazelnut hull. Feeding damage has been recorded in high value specialty crops including tree fruit (apples, peaches, pears), small fruit (e.g., raspberries, blackberries), vegetables such as tomatoes, sweet peppers, sweet corn, as well as agronomic crops such as soybeans (Fig. 2). In one study, researchers in the Mid-Atlantic reported that sweet corn, okra and bell pepper had significant higher abundances of BMSB adults and nymphs compared with green bean, eggplant and tomato.

Damage to Corn and Soybean

In field crops, damage caused by BMSB is not usually evident immediately upon visual inspection. For instance, in corn the stink bugs feed through the husk, piercing kernels and sucking out the juice resulting in shriveled kernels. BMSB tends to appear in field corn once the ear has developed and bugs can feed upon developing kernels, and occasionally even tassel tissue.

BMSB feeding in soybeans is similar to corn, where the bugs pierce the pods and suck juices out of the seeds, leaving behind flattened pods. One visual symptom of BMSB feeding in soybeans is referred to as the "stay green" effect, where injured soybean plants stay green later into the season, while other plants in the field senesce as usual. Additionally, BMSB infestations in field crops are usually characterized by an "edge effect,” where stink bugs infest plants mostly in the first 30-40 feet from the edge of a field.

Because BMSB appear to spend a lot of time in wooded areas or hedgerows and then move out into crop fields, then it is recommended to first scout for populations in corn/soybean fields along margins with woods.

Research conducted in corn and soybean fields in Maryland indicated that the highest density of BMSB in each crop coincided with blister to milk-dough stages in corn (R2-R3/R4), and beginning seed to full seed (R5-R6) stages in soybean. The researchers found that particularly adults and large nymphs dispersed from corn into soybean, coinciding with the end of dough stage in corn and beginning of soybean seed development stage. These findings have important implications for managing BMSM through location and timing of scouting efforts and decisions on management interventions. Repeated scouting of field corn to assess BMSB densities, particularly from blister stage onwards, could inform decisions on management interventions for preventing or mitigating BMSB colonization into soybean.

IPM recommendations for BMSB continue to be developed by researchers across the country. Recommendations on economic thresholds, monitoring, and chemical control are discussed below.

An economic threshold is basically the density of the pest triggering a control method, usually insecticides. If left untreated, economic losses due to pest damage may occur.

In soybean, the economic threshold when scouting with a sweep net is 2.5 stink bugs per 15 sweeps in narrow-row beans or 3.5 stink bugs per 15 sweeps in 30-inch beans. If a visual search is used, then the economic threshold is one BMSB (nymph or adult) per foot of row for beans of any row width. Because the R4 growth stage is most susceptible to BMSB damage, then populations that are high during later growth stages is not expected to result in economic losses. When sampling, keep in mind that BMSB numbers are highest at dusk and dawn, and reinvasion is possible after a pesticide treatment.

Black pyramid traps. Stink bugs, including BMSB, are visually attracted to tree silhouettes. The trap recommended for monitoring is a black pyramidal trap, which represents trunk mimic, coupled with a capturing device. Researchers are trying to assess whether yellow sticky cards, which are easier to deploy, can be used for monitoring purposes.

Pheromone lures. Various companies are now marketing the male-produced aggregation pheromone of BMSB. Research has shown than when this pheromone lure is combined with another lure termed 'MDT lure,’ which is also commercially available, the result is increased response by BMSB adults and nymphs, thereby increasing the efficacy of monitoring traps.

The pheromone lure that is being used in Missouri is called "Stink Bug Xtra Combo - Broad Spectrum 5-7 week lure.” It has been reported to attract multiple stink bug species such as Brown, BMSB, Conchuela, Consperse, Dusky, Green (Acrosternum), Harlequin, and Red Shouldered stink bugs. Therefore, efforts need to me made to correctly distinguish BMSB from other similarly-looking stink bugs.

When should I start monitoring for BMSB? Learning about the life cycle of insect pests is important to design effective IPM tools and strategies, including timing of monitoring. BMSB spend the winter as adults. After emerging from overwintering sites in May and June, BMSB adults begin mating and laying eggs on various host plants. Monitoring for BMSB can start in late-May, and needs to continue until early- or mid-October.

Insecticide sprays are the most effective control method for BMSB. It is important to select effective insecticides given that adult BMSB are hard to kill. Whenever possible, target the nymph stage, as nymphs are more sensitive to insecticides than adults. While insecticide recommendations vary according to availability on different crops, Actara, Brigade, Danitol, Mustang Maxx and Lannate have shown good efficacy in trials; however, multiple applications may be needed with re-infestation. BMSB is hard to kill with insecticides. It has been reported that after insecticide sprays e.g., pyrethroids, adult BMSB are knockdown to the ground, and later on they recover and get back to host plants. Specific insecticide recommendations can be found below.

ALWAYS follow label instructions and safety procedures, and check to make sure the chemical you are using is registered for use in your crop. Mention of trade names or commercial products does not constitute endorsement or recommendation for use.

Notes on insecticide application. The overwintering generation of BMSB tends to be more susceptible to insecticides than the summer generation. Therefore, products with the best effectiveness against this pest should be used later in the season. Insecticides should be rotated among products in different classes with different modes of action to delay the onset of resistance to pesticides. In soybeans BMSB accumulates on field edges. Spraying only the periphery can reduce pesticide use by 85%, while retaining effectiveness.

For current and relevant information on the pest, visit the STOP Brown Marmorated Stink Bug website at www.stopbmsb.org.

Stink Bugs Could Injure Corn In Addition To Soybeans