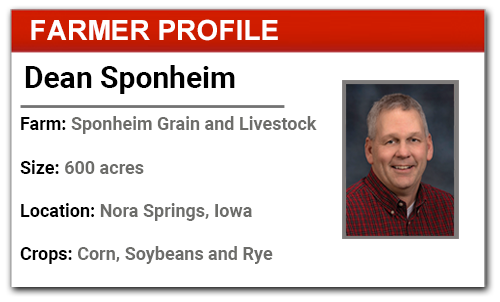 Dean Sponheim, who farms with his son, Josh, near Nora Springs, Iowa, is accustomed to innovating, despite being a relatively late adopter of precision farming practices.

At the beginning of their strip-till journey, the Sponheims didn’t have auto-steer capabilities. They started with a lightbar running off a WAAS signal before transitioning to RTK-guided systems.

“We strip-tilled without auto-steer for 9 years,” Sponheim says. “Once we adopted it with RTK, it was a godsend. We use an 8-row planter, but we can be accurate enough with our two 12 row strip-till rigs that the strip-tilled fields can be planted with 12, 16, 24, 32 or even 36 row planters.”

Sponheim modified their strip-till system in 1999, and developed a custom strip-till business. Then, in 2008, they adopted “strip-cropping” of alternating 8 rows of corn and soybeans and 4 years later began integrating cover crops. The cover crops were a successful addition, and in 2014, the Sponheims went into the custom cover crop-seeding business.

Their newest strip-till rig is built with an Integra bar with Niffty Ag Reapers and an anhydrous ammonia applicator. Two Montag 6-ton fertilizer tanks hold phosphorus (P) and potassium (K), which can both be variable-rate applied.

A John Deere 2630 monitor in their 8430 tractor controls application rates based on either Dean’s fertility maps or maps that Josh develops.

Their second 12 row strip till rig is an Elk Creek 3-point mounted pull cart that carries a Fargo Air 55 tank and metering system and the strip-till bar is a Redball unit.

It also can apply anhydrous ammonia and they plan to replace the ground-driven meter with a system that will allow variable-rate P and K application. Both strip-till units are outfitted with Deere’s iGuide implement steering system so they can maintain sub-inch accuracy on all types of terrain.

“In reality, the machine is driving the auto-steer on the tractor,” Sponheim says. “We use StarFire 3000 globes for the RTK signal pickup.”

Most of their strip-till work is completed in the fall. Their 8-row planter, an International 800 model with a Rawson hydraulic drive, is pulled by a Deere 7130 tractor, outfitted with a 2630 monitor that uses a StarFire 3000 receiver for auto-steering and seeding rate control.

The Sponheims have found the system works very well for them. “It keeps the gap between passes very consistent and our customers have no problem planting with planters up to 36 rows,” he says.

Their custom strip-till business takes them into six counties within a 50 mile radius of their farm. A spotty RTK signal has frustrated them, especially farther away from their home base.

“We’ve traded out the 900 mHz receivers and replaced them with a 450 mHz system and our range has improved,” Sponheim says. “The 450 mHz system definitely works better around tree lines and buildings.”

Sponheim credits his dealer’s network of base stations with getting better signal strength and accuracy. “We have used a mobile base station, but we needed to set it up in the exact same spot,” he says. “Relying on a stronger signal from he dealer’s base station works much better.”

Sponheim believes investing in an annual service plan is worth it. “Our dealer has bent over backward helping us iron out issues,” he says. “We also are sold on the ongoing service agreement.

“We get them every year. It is worth the cost of just under $1,500. If you look at the cost of downtime, the price is very reasonable. It’s an insurance policy, and they will, on a regular basis, download upgrades to our hardware for us.”