Pushing Crop Production with a Strategic Approach to Strip-Till

Pictured Above: GROWING PRACTICE. Results of the 2017 benchmark study evaluating 2016 cropping practices confirmed consistency in several foundational practices, including size and setup of strip-till rigs, along with seeding rates for both corn and soybeans. But analysis also revealed some interesting shifts in strip-tillers’ cover crop and fertilizer preferences, compared to prior years.

Strip-till is an imperfect farming practice and some variables can’t be conquered. But strip-tillers can curb the impact Mother Nature has on their crops with a flexible, progressive system in place, which may include a customized cover-cropping strategy, well-timed strip building and use of implement guidance.

All three areas saw growth during the 2016 cropping season based on analysis of the 4th Annual Strip-Till Operational Benchmark Study. A record 446 farmers from 20 states and Canada who identified themselves as strip-tillers responded to the 40-question survey issued by No-Till Farmer’s sister publication, Strip-Till Farmer.

Results of the 2017 study evaluating 2016 cropping practices confirmed consistency in several foundational practices, including size and setup of strip-till rigs, along with seeding rates for both corn and soybeans. But analysis also revealed some interesting shifts in strip-tillers’ cover crop and fertilizer preferences, compared to prior years.

Dig deeper into equipment setup, strip-building preferences, fertilizing practices and precision farming usage in extended online analysis from the 4th Annual Strip-Till Operational Benchmark Study. Learn about which strip-till rig and GPS correction signal brands are most popular, as well as when and what types of nitrogen, phosphorus and potassium strip-tillers are applying in their operation.

While Midwestern states continue to populate the top strip-till locations in 2016, two other regions gained ground; the Northeast (New York, Pennsylvania, New Jersey, Maryland) increasing from 2.6% to 4.3%, and Appalachia (Kentucky, Tennessee, West Virginia, Virginia) from less than 1% to 1.9%.

Both youth and inexperience were well-served in last year’s study, with 21.6% of respondents under 35 years old and 38.3% under 45. Some 42.7% of respondents reported being strip-tillers for less than 5 years, while 27.9% had been strip-tilling at least 10 years, the smallest number in 3 years. 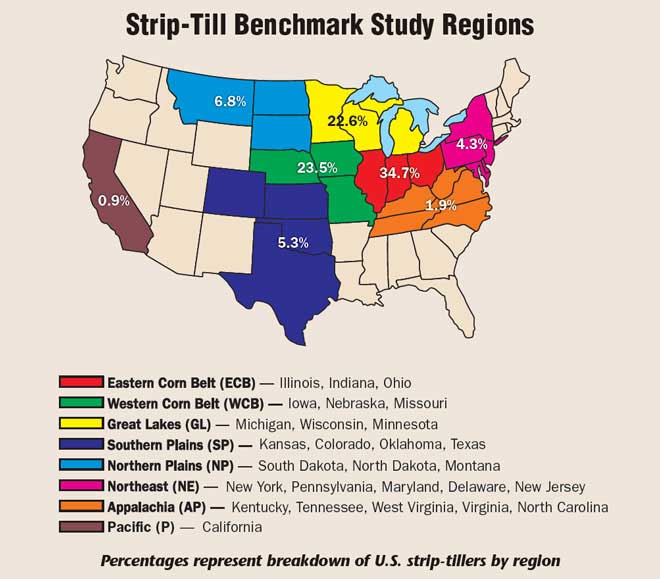 But this year’s study revealed an interesting dynamic, skewing a bit older and more experienced. Some 46.3% of respondents are 55 or over. Compared to 43.9% last year and 19.1% reported strip-tilling at least 16 years, a record high in the 4-year history of the benchmark study, including 9.9% who strip-tilled more than 20 years.

On the other end of the spectrum, 36.2% said they have been strip-tilling less than 5 years, compared to a high of 42.7% in last year’s study.

It will be worth watching to see if the transition continues to take hold in the coming years and how the next generation of strip-tillers will evolve their on-farm methods. Also, only 1.4% are under 25 years old, another record low and continuing a 3-year downward trend.

Overall though, 9 different states were represented among the top 10% of strip-tillers in the 2017 study.

Looking at the age breakdown, the majority (69.2%) of the highest yielding strip-tillers are at least 45 years old, including 46.1% who were 55 or older. Unlike last year, this equated to more experience in the practice.