Timing can be everything when building strips, and in talking with farmers, it seems more are becoming loyal to one time of year or the other, depending on convenience, weather or availability of hired help.

These preferences were even more pronounced in the 4th annual Strip-Till Operational Benchmark study, compared to prior years. The percentage of farmers who prefer to build strips in fall or spring both increased by double digits for the 2016 cropping season.

But those farmers preferring to build strips ahead of planting also increased from a low of 28.7% in 2015 to a new high of 40.4% last year. With more defined preferences, it made sense that the number of respondents who strip-till in both spring and fall declined to 30.8% from a high of 35.6% in 2015.

While data revealed dramatic year-over-year differences in when farmers build strips, there was less variance in the type of row unit setups strip-tillers utilize. At least 37% of respondents said they used either shank-style, coulter system or mole knife setups on their strip-till rig. 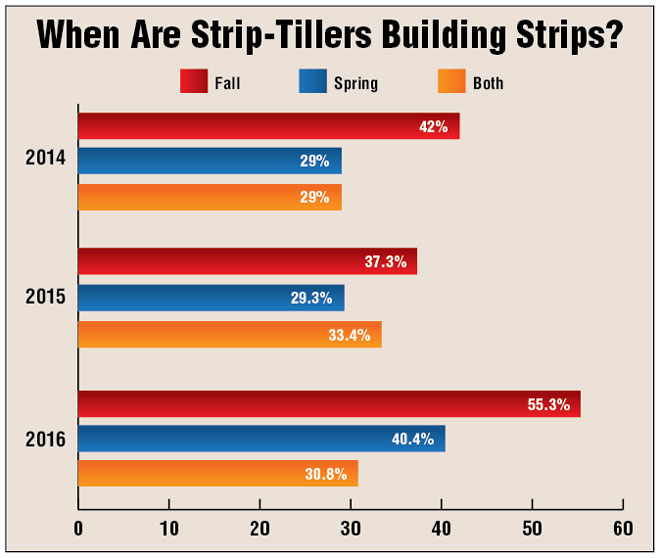 Talking with farmers during the last year, several had added new, used or modified secondary strip-till rigs for use during different seasons, with shanks more commonly associated with fall strips and coulters utilized in spring. While strip-tillers often have an ideal window for when they like to build strips, it’s not always possible. So having a back-up plan with the right equipment can be an asset. 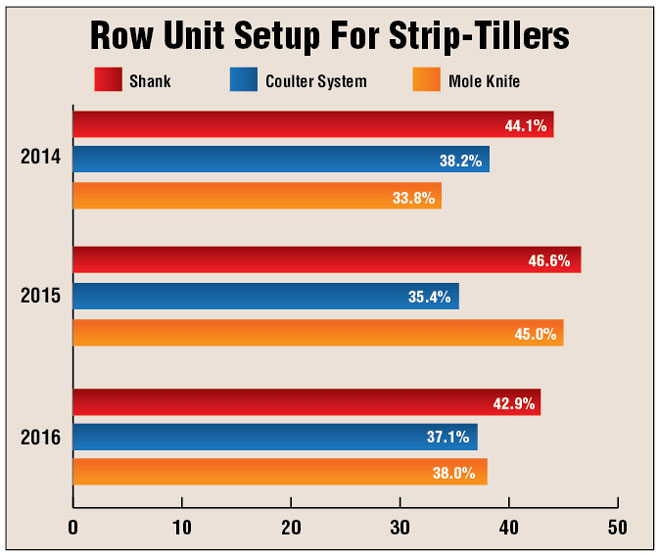 A new question asked strip-tillers to identify their most effective residue management practices ahead of building strips. By far the most popular method was row cleaners, either on the planter (86.7%) or strip-till rig (74.1%). A distant third was sizing residue with combine attachments (27.6%).

Despite the increase in strip-till acreage, the size of machines farmers pulled through their fields in 2016 remained relatively unchanged compared to the prior year.

Tractor horsepower needed to pull strip-till rigs continued to inch upward, for an average of 328 in 2016, compared 325 in 2015. It’s worth noting that since the first benchmark study analyzing the 2013 cropping year, strip-tillers have increased tractor horsepower needs by 50 in just 4 years, a trend worth watching in the coming years.

Farmers tend to be brand loyal when it comes to equipment, but there is also an innovative streak that runs through some strip-tillers as they strive to update, improve or even rebuild strip-till rigs.

Sitting down with a diverse group of strip-tillers during a roundtable discussion earlier this year, Frankton, Ind., farmer Mike Shuter candidly noted, “In strip-till, if you haven’t gone through a dozen [equipment] preparations, you haven’t gotten to where you need to be.”

Strip-tillers have a multitude of customizable options to adapt to their operation and results revealed a competitive market, with no company’s strip-till rig reaching at least 20% for the first time in the history of the study.

For the third straight year, Kuhn Krause proved to be the most popular strip-till rig run by respondents at 17.4%, although the total was down about 3 points from 2015 and 5 points from 2014. 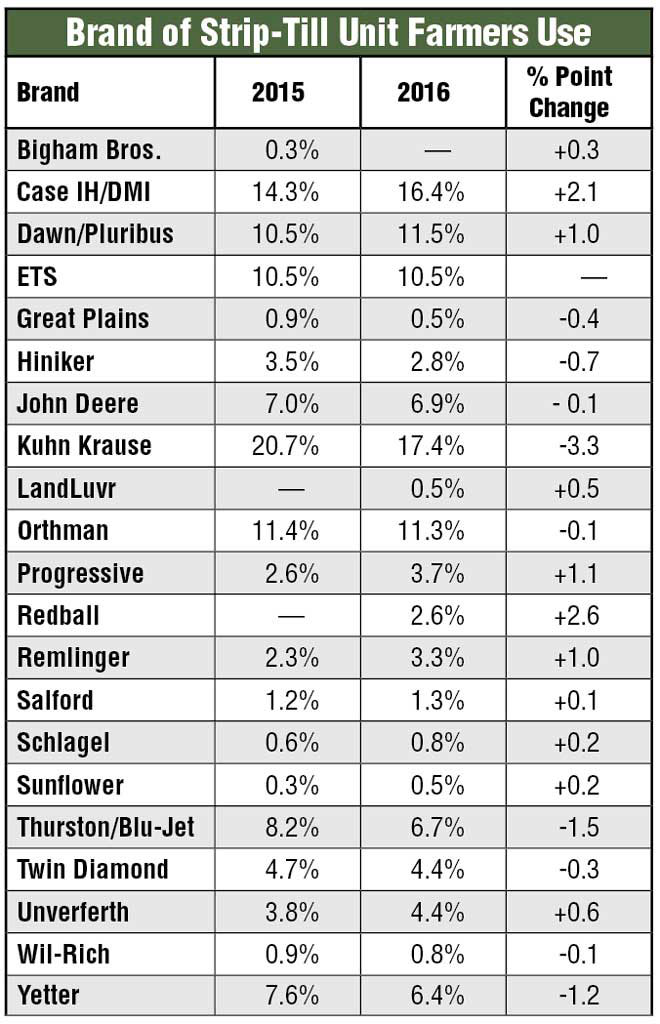 Worth noting is that nearly one-quarter (22.5%) of the top tier strip-tillers utilized multiple row-unit setups on their strip-till rigs, signaling seasonal flexibility and a willingness to match equipment setup to field conditions.

Making up the some of the difference was the number of strip-tillers running 8-row machines. This total increased from less than 1% in 2015 to 12.8% last year.

As for which brand of rig the highest-yielding strip-tillers preferred, Kuhn Krause was on top at 27.5%, about 10 points higher than the overall group (17.4%).

Overall, 14 different manufacturers were represented among the strip-till brands run by the highest yielding strip-tillers.

The Timing is Right: Flexibility in the Timing of Strip-Till With Nutrient Application