Soil-sensing technology and proper strip alignment spearhead a significant trends certain to impact the 2018 planting season and beyond.

Here are the top strip-till products and trends discovered by Strip-Till Farmer editors at the National Farm Machinery Show. For more on what editors saw heard and experienced in Louisville, visit Strip-Till Farmer’s Facebook and Twitter pages. More coverage will also be shared in video on www.StripTillFarmer.com. 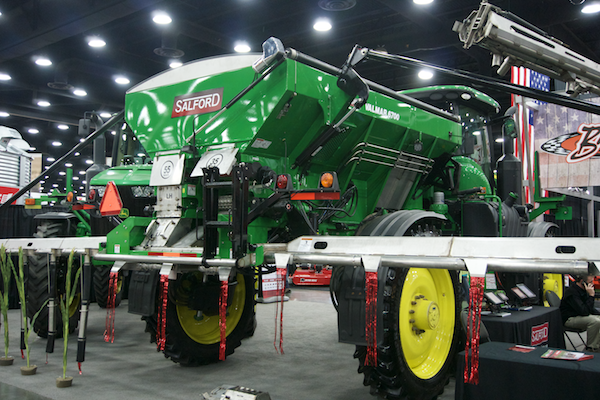 A featured introduction for Salford at the show, the Valmar 6700 Airflow applicator is compatible with John Deere sprayer chassis in response to dealer demands, including the Deere 4930, 4940 and newly introduced large sprayer R4045. Simplifying the process of row crop application was the main objective for the new air boom applicator.

The unit is equipped with a set of 60-foot booms on 30-inch centers to address the needs of 30-inch corn growers and is compatible with 24-row planter setups. Drops can be installed to get applications below a canopy in between the rows, a feature also available for pull-type units.

“The attachment is designed for full integration and includes mounting points specifically designed for the different chassis compatible with the applicator. It’s meant to be a kit that is easily installed at the dealership or in a farmer’s yard,” says Salford Senior Product Manager Brad Baker.

Precision Planting Jumps into the Trenches with Real-Time Soil Sensing

Looking to provide farmers with an improved gauge for soil temperature and moisture levels in real-time, Precision Planting released the SmartFirmer seed firmer sensor for spring 2018. The technology alerts growers of air space and cloddy soils within the furrow, providing them with the information needed to optimize fertility and seeding populations plans across different regions of their operation.

“The narrow area right around that seed is a crucial area for strip-tillers. It's where we're putting all the potential of our crop,” says Justin Kauffman, director of North America sales and marketing for Precision Planting. “SmartFirmer gives real-time sensing of temperature, moisture and residue in those areas. It also maps the organic matter in real-time.” 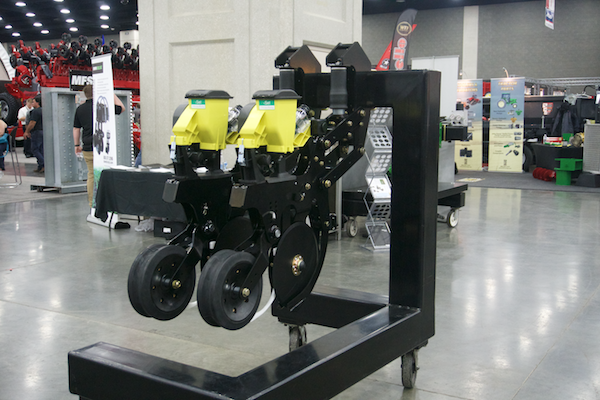 Dawn Equipment announced new advancements for cover crop interseeding with the recently released DuoSeed unit. Designed for the early stages of corn growth, farmers can integrate their own V-Drive or motor system into the unit from other manufacturers, such as Precision Planting.

The upgrade, which maintains the parallel linkage design with v-opener blades, is intended for greater flexibility with planting rates and getting cover crops established at the right time.

A common theme from the show, interseeding cover crops, allows farmers to lock in any nitrogen (N) runoff before it goes to waste, especially for cereal rye or radish crops. The Dawn system aims to maintain nutrients in the top levels of soil post-winterkill, giving corn or soybeans a solid foundation for the upcoming planting season, says sales manager Jeff Svenson.

In gathering strip-till tips for the upcoming planting season, a key nugget of advice from several experts centered on line repeatability when planting after strip construction. As Brian Sorbe, vice president of sales and marketing for Topcon notes, growers who use different tractors for berm building and planting run the risk of placing the seed in the wrong part of the strip if they fail to double check their alignment beforehand.

“Make sure the implement is loaded correctly, and maybe even test drive it out to the field,” Sorbe says. “You don’t have to necessarily drag the planter out there, just drive the tractor out and measure. That way you can make sure that when that line is recalled in the spring, it’s in the same position you laid it in the fall.”

“When strips aren’t straight or you don’t get the guidance lines set up right, having that down force set a little be higher than what you would normally have it in a fully-tilled or cultivated field, can be crucial,” Lursen says. “Otherwise, the penalty seems to be pretty severe as far as yield goes if you end up outside of that strip.”

As explained by Jake Jass, sales manager for Copperhead Ag, growers can find themselves with a stale seedbed ahead of planting season, whether it’s from a series of rainfalls after spring berm construction or the aftermath of a harsh winter after building strips in the fall. Stale seedbeds often include mellowed out soil, or soil that has reclosed and needs some rectification.

When tending to these seedbeds, Jass explains how sidewall compaction can play a major role for ensuring seeds are correctly placed in the bottom of the furrow.

“Planters with a double disc opener create a ‘V’ into the soil and pressing that throughout the whole field,” Jass says. “That ‘V’ is important for making sidewall compaction for seed placement into the furrow. Without a good furrow, which is created in-part from compaction, you can’t get your seed into the proper depth.”

But managing that compaction, Jass elaborates, is key for avoiding uneven emergence and lower stand counts for crops. With that in mind, he says growers need to find a way to get that compaction back out of the soil, which can be done though the use of spiked closing wheels.

“Those spikes go into that ‘V’ you’ve created with your double disk opener, crumbling that sidewall down. Then we have a wide controlled wheel that firms that soil back up around that seed. In doing so, we’re able to resolve that compaction in stale seed beds.”