John Werries, his son Dean, and one employee are no strangers to making adjustments year-to-year to combat the unpredictable conditions of their Chapin, Ill., operation of no-tilled beans and strip-tilled corn.

From precision investment to cover crop implementation, the search for perfection builds the family-run foundation, as exemplified by two vital adjustments in the past few years.

Reaping the benefits of minimized erosion and yield booms for his strip tilled acres, one concern that had remained for Werries involved accuracy on the strip when building berms. Settling on a John Deere 9000RT two-track tractor for its ability to drive straight easily, he came to discover that the tractor alone wasn’t enough to consistently stay on the strip during formation in the fall.

“Accurate strips provide the most beautiful seedbed there is, but when you get off it, you go from a warm and mellow soil with ideal moisture, to the coldest wettest conditions possible,” he says. “With a corn planter, it’s a 20-bushel hit.”

Looking to rectify the issue, Werries doubled down on technology, getting his tractor equipped with both an AJ Equipment steerable hitch and John Deere iSteer active implement guidance system.The system works only with the optional wide swing drawbar.

Pleased with its reliability, Werries uses the same tractor and guidance system for strip formation in the fall (where he simultaneously applies NH3) and for planting corn into the rows — straight or curved — in the spring. 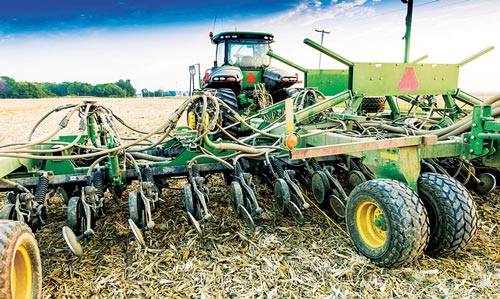 SEEDING SIMPLICITY. Equipped with dual application settings on his John Deere 1890 air seeder, John Werries can toggle between solid seeding and skip rows for his cover crops with the touch of a monitor in this cab.

“With the RTK GPS, the accuracy is sub-inch,” he says. “It’s amazing to watch the steerable drawbar work when you’re on a side slope. It moves the drawbar uphill and keeps the implement exactly where it belongs.”

While an unconventional tactic for many, Werries has enough confidence in the steerable hitch and RTK GPS that he uses the setup to air-seed 10-inch soybeans between 10-inch rows of cover crops. For Werries, accuracy with the air-seeder overcomes any concerns about downforce or depth control that might be more assured with a standard planter.

“We just scoot over 5 inches and put the soybeans in between the rows, so there won’t be any problem trying to force the opener through a row of cereal rye,” he says.

Werries implemented cover crops in 2012 and experienced no setbacks for the first three seasons. Starting in 2016 and reoccurring in 2017, however, Werries was unable to terminate the cereal rye cover crop ahead of his strip-tilled corn in a timely manner, due to the cooler weather and wetter conditions.

“The cover had grown so big and overtaken the strip to the point that the row cleaners couldn’t even sweep it aside,” he says. “It hurt our stand and yield significantly.”

With the intention of providing a greater margin for cover crop expansion, Werries decided to adjust his John Deere 1890 air seeder from 7.5 inches to 10 inches. The air air seeder configuration consists of six towers with eight hoses for each tower, equating to 48 rows combined.

With four towers in the front and two in the back, the two back towers are split to the left and right, each seeding eight rows and accounting for the 16 total rows intended for corn strips. Through the use of a display monitor, Werries can toggle the back rows on and off as needed, whether he is seeding for no-tilled soybeans (solid seeding) or strip-tilled corn (skip-row option) in a matter of 10 seconds.

For his corn acres, the result is two different 10-inch cover crop rows between each berm, allowing for a 20-inch space to make the strip for planting with unprecedented assurance from cover crop competition.

“What we end up with is a bare place to make a strip in the fall and a bare strip to plant corn into during the spring, no matter how big the cover crop gets,” Werries says.