Jordan and Katie Hancock have added variable-rate technology, cover crops, canola and strip-till to their no-till farm in southern Kentucky to control erosion, save inputs and increase profits.

No-till and strip-till are natural solutions to stopping erosion and pumping up profits, but the Hancock family is looking to do better.

Located in Fulton, Ky., just a few miles north of the Tennessee border, Jordan and Katie Hancock are modifying equipment and using cover crops to curb erosion even further, while aiming to get the most out of every acre.

The Hancocks have a rotation that includes corn, wheat, double-cropped soybeans, and now some double-cropped canola. Of the 5,500 acres the Hancocks raise, everything is no-tilled save for 400-500 acres of habitually wet fields that are worked up so they’ll dry out in the spring.

Jordan notes that their oldest no-tilled field — continuously no-tilled for 36 years — is their best-performing field. He says it yields more consistently and usually 10-18% higher than the rest of the farm, although he notes it’s on one of their better soil types.

Since their acres are spread out over a large area, the Hancocks farm a total of 20-25 different soil types. While managing that many variables can be challenging, adopting variable-rate technology has made a big difference.

The Hancocks use SMS Advanced variable-rate technology, which has paid for itself in lime applications alone, Jordan says. Variable-rate planting — their first adoption of the technology — has reduced seed costs with no overlap, providing a return on investment in only one year. 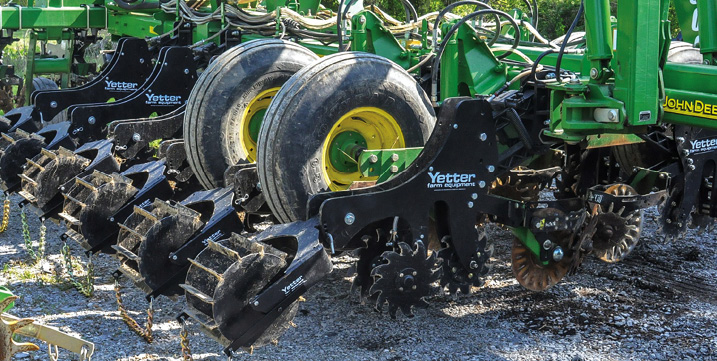 STRIP-TILL CONVERSION. Kentucky no-tiller Jordan Hancock is experimenting with strip-tilled corn and may even try strip-tilled canola. To create the strip-till rig, he took the planter units off a John Deere 1770NT planter and replaced them with coulters, Yetter 2984 Strip Freshener units and drag chains. The rig runs only a couple inches deep.

“We put out less seed in field areas that don’t have as much yield potential, so we’re saving on seed costs, and it gives us a little bit of a yield bump,” Jordan says, adding that it’s hard to quantify the yield increase, but it’s enough to continue using the technology. “It improves yield on both the poor ground and the higher quality ground.”

The Hancocks use a John Deere DB60 planter equipped with Yetter row cleaners, Keeton seed firmers, one solid and one spiked Martin closing wheel, followed with a drag chain to plant their corn.

Jordan says getting the seed trench closed up had always been difficult until they adopted their current closing system.

“A lot of people have plastic wheels here, but we went with the metal and spiked-tooth closing wheel and it’s made a huge difference,” he says.

Running a single spiked closing wheel helps bust up sidewall compaction, but Jordan notes if he ran two spiked wheels there’s a risk of causing erosion down the row. The drag chain helps them achieve a better stand by taking some of the air pockets out of the closed furrow.

While it varies by yield potential and soil tests, the Hancocks typically apply a total of 164 nitrogen (N) units with a goal of 200-bushel corn.

In addition to starter fertilizer, they apply anhydrous ammonia with a John Deere 2510H nutrient applicator before planting and through sidedressing. They like sidedressing the best for their N program, but usually don’t have time to sidedress everything. Instead, they pick the fields and soils that will benefit the most from it, which is usually about a fourth of their corn acres.

“A lot of people have plastic wheels here, but we went with the metal and spiked-tooth closing wheel and it’s made a huge difference…”

About an eighth of their acres are irrigated, so the Hancocks will apply 32% liquid N through the pivots when corn is tasseling, which gives them about a 10- to 15-bushel yield bump over no application.

On dryland acres, when it’s been a wet spring and they couldn’t get their anhydrous applied, they’ll fly on ammonium nitrate with an airplane during tasseling, which will usually provide an additional 10 bushels.

They say they highly value soil testing for proper fertilization, which they currently do by grid sampling. However, they’re considering moving to management zones to be even more precise with their fertility, as they feel the grids can still miss the variation they have in their fields.

In addition to N, the family applies 1.5-2 tons per acre of poultry manure to half of their corn acres. That doesn’t get counted in their N program, as Jordan says they lose most of the N due to volatilization, so they only credit it for phosphorus and potassium.

They also added equipment to their anhydrous toolbar to band dry fertilizer behind it, which saves them an additional trip across the field.

Looking to warm up the soil while reducing erosion, this year was the first time the Hancocks tried strip-tilled corn on about 700 acres.

Jordan removed the planter units from a John Deere 1770NT planter and replaced them with coulters, Yetter 2984 Strip Freshener units and drag chains to build strips in the spring.

He says the conversion process took a day and wasn’t difficult. They were able to sell some of the planter units to cover the cost.

Unlike typical strip-till rigs that run at least 6 inches deep, theirs only disturbs the first couple inches of soil. The Hancocks were pleased with the results and wanted to strip-till more acres, but wet weather prevented them.

This year was also the first time the Hancocks tried seeding canola. Jordan talked to another farmer who was raising it, and with an oilseed crushing plant opening up within driving distance, it seemed like a good opportunity, he says. 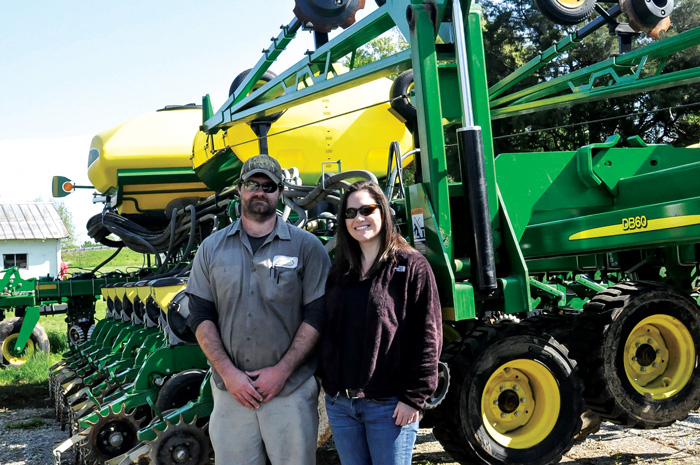 DIFFERENT SETUP. Unlike other no-tillers in the area, Jordan and Katie Hancock run Martin row cleaners instead of coulters on their planter, along with one solid and one spiked closing wheel and Keeton seed firmers. A Totally Tubular system places fertilizer off to the side, preventing seed burn in corn.

The typical yield for canola in their area is 50-70 bushels an acre, and their canola yielded 60 bushels per acre. Katie notes it made 20 bushels less than their wheat, which was expected, but the price for canola was higher and it was still profitable. Canola is priced off of soybean prices since it’s an oilseed, she says.

Next year they’ll use a plane late in the season for fungicide because the ground rig ran over a decent amount of the crop, which they think cut yield too much.

After harvesting the canola in June, they double-cropped soybeans behind it.

In addition to the winter canola and winter wheat, the Hancocks seed about 400 acres of cover crops every year, as well as in smaller spots that erode badly, such as rolling ground where wheat isn’t growing. They’ve primarily used cereal rye because its deep roots break up compaction.

They’ve also tried radishes, but they’re usually too far south for them to winterkill, which can create a problem for termination.

Jordan recalls a few years ago he had some radishes planted that didn’t winterkill. He was unable to get in the field to terminate them because conditions were too wet, and the radishes grew so large they left large holes in the ground. Jordan had to work the ground because it was too rough to plant.

He says the biggest benefit they’ve gained from using cover crops has been preventing soil erosion. Landlords are taking notice, Katie says, because unlike nutrient benefits, they can physically see the difference cover crops have made in holding the soil in place.