In a world with skyrocketing fertilizer prices, strip-till is an attractive option for farmers looking to decrease their input costs. But making strip-till work requires a lot more than buying fewer inputs and dragging a new piece of equipment through the field.

That’s where Jeff Morgan’s strip-till feasibility calculator comes in to start the conversation about the economics and the reality of adopting strip-till.

Morgan, western regional manager at H&R Agri-Power, works with farmers in western Kentucky and West Tennessee, an area where strip-till has been slow to catch on.

“It’s a relatively new concept for this region,” Morgan says. “Our environment and climate is different from most strip-tillers. We’re still in the early stages.”

H&R Agri-Power started working with farmers interested in strip-till in 2015. At the time, corn prices were in the $3-3.25 range, and farmers were looking for ways to stay profitable growing corn. The market has since shifted considerably, but now with input prices as much as tripling, farmers in the region are once again considering strip-till.

Morgan says most local farmers don’t know much about strip-till because it’s not widely practiced in western Kentucky and West Tennessee. It’s been used for specialty crops, particularly tobacco, but it’s a new concept and process for other row crops.

To help curious farmers determine if strip-till could work for their operation, Morgan developed a strip-till feasibility calculator, a spreadsheet that serves as a starting point for the economic and management considerations of adopting strip-till for corn.

“It’s a conversation starter,” Morgan says. “It’s just a way to plug in and shake a few things out. This is like first base in a baseball game. After this, we throw this calculator away, and the conversation gets a lot more in-depth and technical.”

How to Calculate Savings

The spreadsheet compares potential savings on reduced nitrogen (N), phosphorus (P) and potassium (K), and higher earnings from yield increases on strip-tilled ground with the cost of strip-till equipment. Morgan uses the following formulas to estimate the overall bottom line increase per year:

Morgan uses a 10% reduction in rates as a conservative estimate for the first year. He encourages farmers to take baby steps in cutting rates.

Yield increase is calculated as:

A 10 bushel per acre increase is another conservative estimate for farmers who are interested in trying out the calculator themselves.

“I encourage my guys to be conservative because we can start playing these calculator games and get pretty excited,” Morgan says, “but if this were to work half as well as what’s on the page, would you still be interested?”

Adding the sums of those calculations results in the estimated overall revenue increase per acre.

Morgan then asks the farmer how much of the total corn acreage will lend itself to strip-till. In western Kentucky and West Tennessee, land with a 0-3% slope and soil types that don’t erode are ideal for strip-till. Generally about one-third of the farmer’s crop is suitable for strip-till in that region, and that acreage number is plugged into the calculator.

CRUNCHING NUMBERS. In this example of Morgan’s strip-till feasibility calculator, a hypothetical farmer who plans to strip-till 500 acres of corn would increase profits by $52,500 per year, compared to the approximately $35,000 per year owed on their new strip-till equipment.

The next step is to compare the calculated savings to the cost of the strip-till setup. Morgan matches the customer with a strip-till rig and enters that cost into the calculator. He also factors in estimates for guidance upgrades and other additional costs, such as planter upgrades or implement guidance.

Morgan makes equipment recommendations based on the farmer’s tractor size because strip-till is a horsepower-intense application. Most of the rigs sold in Morgan’s territory have a 3-point hitch to minimize drift because of the region’s rolling terrain.

“We’re all about the solution,” Morgan says. “If one company offers a particular feature that the customer needs, that’s the route we go. We don’t let the color of the equipment dictate what we make available to the customer.”

“$35,000 against $52,000 is a gain,” Morgan says, “but is it enough? We caution people that when you go into strip-till, so many of the things you have to do to make it successful come at a time when other things are happening. There’s a different level of management required to do this.”

Farmers often find themselves in the combine rather than making fall strips, Morgan says, which compromises the timeliness and effectiveness of a strip-till program. At this point, Morgan and the farmer discuss how yields could further increase and inputs could continue to decrease with a strip-till system, and how that would change the bottom line. 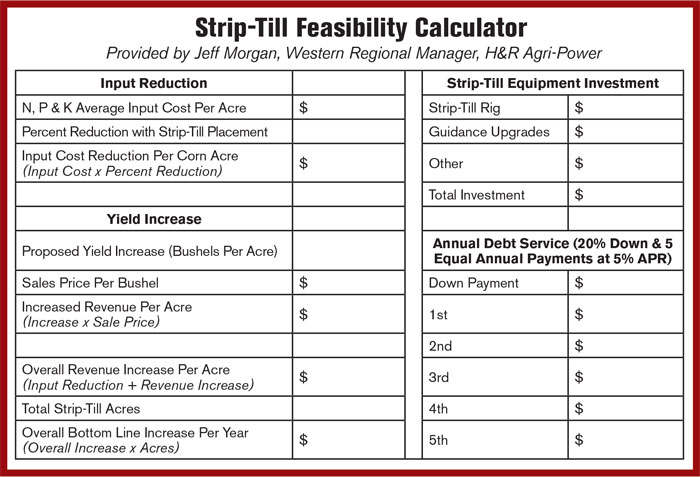 DO THE MATH. Use Morgan’s strip-till feasibility calculator for your own operation or share with your neighbors to start the conversation about switching to strip-till.

He emphasizes that the calculator is not a guarantee — it’s just a tool intended to start a conversation and get the farmer, agronomist, equipment dealer and other trusted partners thinking about the potential for incorporating strip-till into the operation.

“It’s a pretty quick way to qualify the level of interest that you may have,” Morgan says. “I encourage the grower to bring their team into this because I’m not an agronomist. We’ll walk back through all those details, and we’ll move forward if we think this is a practical way to go.”

Morgan makes it clear that his role as the equipment dealer is to match the farmer with the right strip-till tool for his tractor and operation. That’s why he wants farmers to include everyone in their “brain trust” in the strip-till conversation.

Is Strip-Till Right for You?

Sometimes it’s apparent when the economics of strip-till aren’t going to work for an operation. Morgan gives the example of a hypothetical grower who doesn’t want to reduce inputs by more than 5%, and plans to dedicate 200 acres to strip-tilled corn that’s selling at $5 per bushel. That scenario generates about $10,000 of extra income per year. Even with a cheaper strip-till rig, the farmer still isn’t coming out ahead.

However, that doesn’t mean strip-till is impossible — it may just require some creative thinking. Morgan says he had a customer purchase a strip-till rig with 2 neighbors. Individually, they couldn’t take the financial risk, but as a group, it was a good investment.

Morgan says strip-till originally gained popularity in other regions because co-ops owned the strip-till rig, and rented it out or did custom work. Right now, sharing equipment is a challenge for many farmers in western Kentucky and West Tennessee because rigs are so customized. None of Morgan’s customers has the same setup.

“Standardization would help,” Morgan says. “That way, if a co-op had 10 customers doing the same thing, and they wanted you to custom apply your acres, you could justify the investment.”

Several local co-ops have asked Morgan to run through the strip-till feasibility calculator for them, although none have yet to invest.

“I think we’re just a little ahead of it right now,” Morgan says, “but I think the opportunity will come around.” [Podcast] Pushing for Perfection with Your Strip-Till Seedbed