Why Roots Matter to Soil, Plants and You

Imagine walking out into a crop field or pasture. What do you notice? Perhaps you see amber waves of grain out to the horizon or hear the leaves rustling in a cool breeze.

But would you ever think about what’s beneath your feet? What lurks in that hidden world, and why does it matter to you? As you look at all the growth aboveground, you might consider that just as much plant mass is invested in roots.

In fact, in the springtime in Oklahoma, 1 acre of grassland or pasture may have about 1,000 pounds of standing shoot mass aboveground but as much as 3,500 pounds of roots below ground, in the top foot of soil.

Plants are like a factory, using energy from sunlight to produce sugar in their leaves that provides the carbon backbones for making all the other molecules required for life. In order to build more leaves with their green chlorophyll, plants need to send their roots out into the soil to forage for water and mineral nutrients such as nitrogen and phosphorus.

These nutrients are required for making proteins, like chlorophyll, and to fuel the molecular energy system in the form of adenosine triphosphate (ATP). Also, DNA itself requires phosphorus. 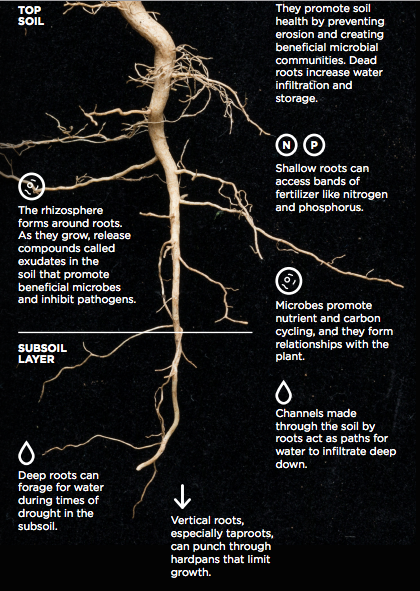 When pondering how to optimize root systems, we have to think carefully. More roots are not always better. Roots are built from the carbon gained during photosynthesis, meaning they represent a construction cost. All those roots also require carbon for normal operations such as respiration, which is the maintenance cost.

Therefore, optimizing root systems requires both engineering and economic principles about how to efficiently explore soil with as few roots as possible. In fact, many human factories use this marginal value theorem from economics to decide which parts of the factory to invest in, always maximizing the investment’s profit per unit cost.

In basic research and breeding programs at the Noble Research Institute, we consider aspects of root system architecture including root angles, number of axial roots, lateral root branching density and root diameters. We use image-based plant measurement, or phenotyping, among many other approaches.

However, roots don’t matter only to the plant. In fact, roots are central to soil health, which ultimately relies on the photosynthetic abilities of plants to provide food to the entire ecosystem. As roots explore, they release sugars, organic acids and other compounds into the soil during the exudation process.

Through this process and others, soil around the roots becomes a special place called the rhizosphere (rhizo means "root" in Greek). These organic compounds can promote beneficial soil microbes, such as bacteria and fungi, and inhibit plant pathogens. Beneficial soil microbes increase carbon and nutrient cycling in the soil, ultimately benefiting plants.

As roots die, the entire organ becomes dinner for the microbial community along with other soil creatures like worms and insects. All these root-derived inputs are fundamental to creating and storing soil carbon and are a driving force for soil health, as increased soil carbon allows for better water infiltration and storage in pastures and fields.

Designing better roots is an important avenue for helping people. With better roots, we can increase yield, reduce fertilizer use and pollution, and promote soil health. At the Noble Research Institute, we are screening natural diversity for root traits in several crop and pasture species; with the creation of new knowledge, we will include these traits in breeding programs to release new cultivars with improved root systems. So, the next time you’re outside admiring the beauty aboveground, don’t forget there is an equally beautiful and complex world under your feet

'Send in the Drones' to Protect Soil