Three popular pre-plant phosphorus (P) application methods are broadcast or surface applied, deep banding and strip- or zone-application. Each of these methods has a definite impact on movement of P both on- and off-target that directly influences plant health and growth, but also nutrient reduction strategies put forth by many states.

Before you choose a method of P application, it is important to understand and consider the current and optimum soil test levels for your soils, yields, removal rates and plant availability of the source. Other influences such as manure, locations of potentially sensitive areas, regulations and laws at all levels, and the economics of a chosen method and source.

Broadcasting or surface application is a method that works with all tillage types: conventional, no-till and strip-till. During a broadcast application, a spinner spreads fertilizer on top of the soil and any residue on the soil surface. This method is fast, easy and very economical. It also helps build surface phosphorus levels in the top 1-3 inches of the soil, but may significantly contribute to P loss through erosion and surface runoff.

Another option is deep banding, which can also be used with both conventional and strip-tillage. Like the name says, P is placed in a deep “band,” normally 4-6 inches or deeper, and concentrated at the bottom of the tillage “V” (Figure 1). This method requires soil manipulation/tillage, typically using 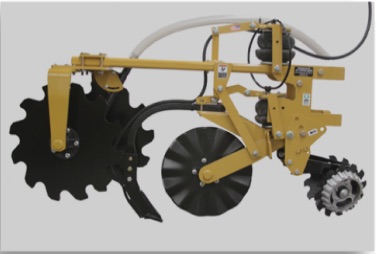 a shank with a knife, so more horsepower is required compared to a broadcast system. Banding builds sub-surface soil P levels and, by default, decreases surface P levels. This method can be less immediately accessible if the planter gets off the banded area and the seed is not dropped in the area directly above the band of the strip. Banding may also risk the safety of the seed or seedling if they contact a high salt concentration band. Finally, due to the action of a shank and knife, especially when soil conditions are wet, banding may leave or create voids, air pockets or smears.

Zone or strip application is another choice and one that many strip-till farmers are using. In zone application, P is mixed into a “zone” similar to a rectangular box that begins a few inches below the soil surface and extends down 3-6 inches and is 10-12 inches wide (Figure 2). The concentration of P is spread through dilution in greater soil volumes leading to a much safer seed and seedling environment even though the same amount of plant-available fertilizer is in the soil. Zone application once again requires more horsepower than broadcast but is similar to deep banding and is accomplished at the same time as the seedbed prep step with the strip-tillage unit.

Zone application also builds sub-surface P levels and helps reduce surface P levels, hence limiting erosion/nutrient runoff that may move P off-site. This method also allows P to be available throughout the zone regardless of seed position. The seed can be planted in any part of the zone/strip and have access to nutrients instead of taking the chance of possibly missing a band, or maybe worse yet, directly hitting a hot band. Zone application is typically is made with a coulter-type setup, instead of a shank and knife, creating wider and squarer zones with greater total tilled volume within the same width strip.

Choosing an application method not only involves how you physically make the application, but what the end result is from an economic standpoint, plant growth and development standpoint, and a nutrient retention and loss-reduction standpoint.

Read more in the series >>