The prospect of delayed planting of corn leads corn growers to consider whether changes in seeding rate should be made in response to late planting. The short answer is that optimum plant populations probably remain the same regardless of planting date. Based on 95+ field scale trials conducted around Indiana since 2008 (Nielsen et al., 2019), the average economically optimum HARVEST plant population is surprisingly low for most soils around the state (less than 30,000 plants per acre) and also surprisingly applicable to a wide range of grain yield levels (between about 150 and 250 bu/ac).

Planting dates among those 95+ trials varied by chance from as early as April 15 to as late as June 8. There is no obvious relationship between economic optimum plant population and planting date among those field scale trials (Fig. 1). What that means is that optimum populations for early-planted trials were essentially the same as those for later planted trials. 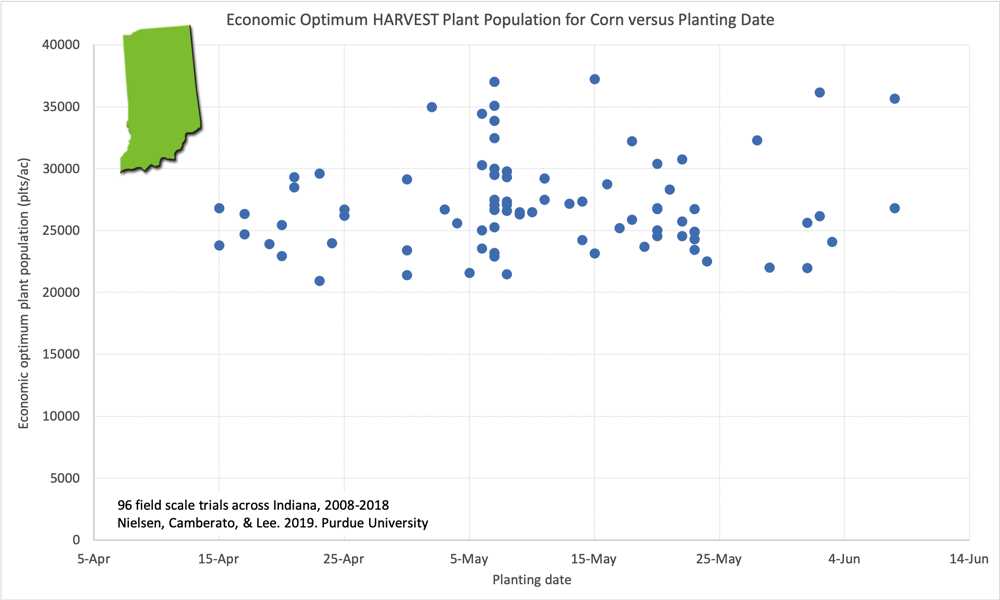 That conclusion supports what other researchers have also reported over the years in Ohio (Lindsey et al., 2015), Illinois (Nafziger, 1994), and Minnesota (Van Roekel & Coulter, 2011). In both the Ohio and Minnesota research, there was the occasional interaction between planting date and plant population, but overall those studies concluded there was little reason to increase seeding rates with delayed planting.

One caveat to remember is that soils are typically warmer with delayed planting than for "early" planting. Germination, emergence, and stand establishment will occur more rapidly (calendar time basis) with delayed planting and the percentage of planted seeds that become harvestable plants typically is higher (i.e., higher percent stand success). In other words, you may be able to achieve the same desired final population with a slightly lower seeding rate in delayed plantings and save a little on seed costs.

Ultra-Narrow-Row Corn: Squeezing The Most Out Of Your Crop