A father-son team from Illinois built a customized strip-till bar to maximize their uptime, costs and input usage.

Every farmer has certain aspects of the business that they just click with. Some producers are really into agronomy; others enjoy going deep on the financial side of the business.

Still more growers love the tech aspect of farming and enjoy working with precision equipment. For Mike and Kale Carlisle, father and son strip-tillers from Carthage, Ill., equipment is their “thing.” With the help of their neighbor, Andy Thompson, the Carlisles built a 24-row, 20-inch strip-till bar to apply liquid nitrogen (N) at high speeds ahead of the planter.

The Carlisles farm 1,700 acres, of which two-thirds are corn-on-corn and one-third are soybeans. MTC Land & Livestock also includes a wean to finish hog operation that finishes 17,000 hogs per year.

“We’re very new to strip-till,” says Kale. “My dad has always done corn-on-corn because we needed the acres to feed the hogs, but our main concern was residue management. It was hard to manage when planting and trying to apply N. The system we had before took a lot of power and we had a hard time getting everything done. We had a test plot in 2018 of 12-row, 20-inch corn, but we’re trying to transition out of deep tillage and a lot of tillage passes.”

The extra residue underground was contributing to disease issues such as crown root rot, and the Carlisles’ previous system wasn’t as efficient as they wanted.

Thompson, who also serves as AOR manager for Yetter Mfg., says the main driver behind the Carlisles’ transition to 20-inch strip-tilling was being better positioned to achieve their goals. Strip-tilling will allow the Carlisles to be more efficient in time, costs and inputs during short planting windows.

“The Carlisles are trying to lower their production costs per acre,” Thompson says.

Once they made the decision to try strip-tilling, the Carlisles consulted with Thompson about the challenges of 20-inch strip-till and customizing their own machine.

“Cost was a major driver, and we could put together a bar cheaper than we could buy one, Kale says. “We could put it together exactly as we wanted it, and we came out ahead. Andy helped us price out different options and was a big help.”

The 20-inch row set up is unique simply because it allows the strip-tiller less space to operate, Thompson says. “Generally speaking, it’s difficult to get residue and soil to flow between 20-inch rows,” Thompson says. “Most strip till equipment is too large to operate at 20-inch spacing because of the components required to manage residue and create a tilled strip.  Mike and Kale want to manage residue, create the ideal seedbed and have consistent seed depth.  Even with the difficulties presented on 20-inch rows it is important to maintain those goals.”

“Residue is managed by moving it to the side first,” Thompson says. “Then each row units’ wheels will till the soil within the strip followed by the rolling basket to condition the strip. The row units feature pneumatic control of the row unit down pressure, row cleaner up and down pressure, and rolling basket up and down pressure all controlled from the cab. The depth of each row unit is controlled by 3-inch spoked gauge wheels on each row unit. This system does not include any knives like a traditional strip till system would.”

The Carlisles are not new to rebuilding equipment. Their most recent planter is a used 24-row, John Deere 20-inch model that Kale says he and his father customized to be a high-speed planter.

“That project was similar to the strip-till bar,” Kale says. “We were piecing a lot of systems together and making sure it was all going to work. But the strip-till bar was a bigger challenge. Beyond the row units there was nothing ‘off the shelf’.  Every decision had to be customized for us.  But we were able to get the machine built to what we wanted that wasn’t too aggressive. We will make the transition to corn-on-corn acres by shifting rows over 10 inches every year and managing the residue and cornstalks by pushing them off to the side for an extra year to decompose. We will come back two years later on the same row.”

The Carlisles started with 24 Yetter Strip Freshener CC row units and attached them to a custom-built B&D Metal Works double-fold toolbar. They then mounted that to an Elk Creek 500SS caddy and added an Enduraplas 1,400-gallon liquid tank. The pneumatic needs are fulfilled by a Yetter air system while the liquid delivery system is comprised of a Hypro hydraulic pump, Raven pulse width modulation (PWM) valve, Hypro four section electric shut-offs and Wilger flow monitors. The liquid system is controlled by a John Deere rate controller operated by a John Deere 2630 monitor and hooked to an iPad via Climate Fieldview Drive for recording. 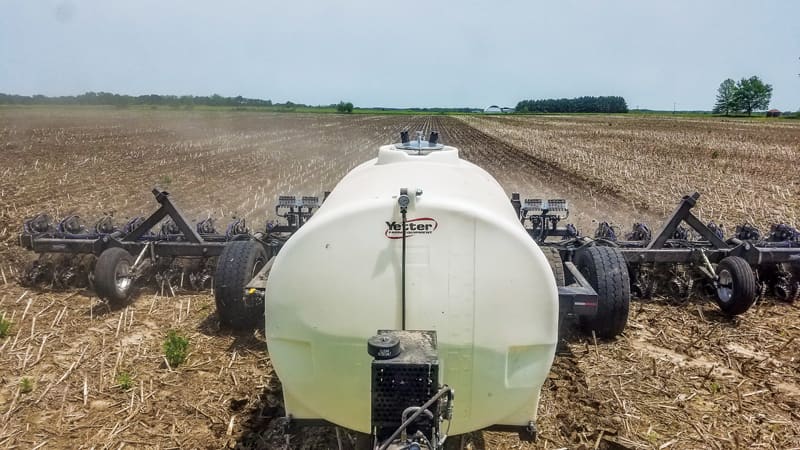 FIELD TESTED. 2019 is the first year the Carlisles are strip-tilling every acre of corn. They can cover about 80 acres on one fill and able to pull their custom-built rig at 8-10 mph while applying fertilizer.

The air and liquid are both plumbed back to the strip-till bar. All liquid runs through a Wilger side gauge system and goes down the tubes on the sides. Fertilizer follows through a 3/8-inch hose similar to a planter row unit.

The row cleaners are near the wheels to clear residue and push it to the side while also making a slot. The Yetter rolling basket at the rear is controlled with air pressure and closes the slots to enclose the fertilizer.

Challenges appeared right off the bat, according to Kale.

“There was a miscommunication in the orders, and we had hookup problems with the three-point hitches between the caddy and the toolbar,” Kale says. “We had some logistical challenges making sure everything was going to connect the way we needed it to. Nothing went together seamlessly, and it put us back a few days every time we ran into one of those challenges.”

Compatibility was one of the biggest challenges the Carlisles faced during the building process. When running the strip-till bar, the tractor shifts the previous year’s planting row by 10 inches.

“Our planting tractor is a Deere,” Kale says. “So, this year, we got a bridge to put a John Deere guidance system on our Cat Challenger MT765B that tractor to make our lines compatible and transferable for running pulls the strip-till bar and the planter on the same line.”

The Carlisles pull the rig with a tracked 300 horsepower Cat Challenger MT765B that is outfitted with a Deere guidance system and control box for the pressure units.

“The Yetter 2984 Strip Freshener Cab Control units have a bunch of air bags and air cylinders on them to control down pressure, rolling baskets and row cleaners,” says Kale. “The Deere rate controller has a StarFire 6000 receiver to control the fertilizer system. The Deere 2630 GS3 monitor is running the RTK guidance.”

The Carlisles use their strip-till system to apply UAN 32% solution with thiosulfate at 15 gallons per acre, with 7½ gallons per-acre applied 4” to each side of the seed.

From start to finish, Kale estimates the entire project took about 2 months to complete and the strip-till rig cost around $135,000 to build.

“We’re pretty happy with what the strip-till system is doing,” Kale says. “Once we got it tuned in, we didn’t run into any problems. The things we were worried about before the season have worked themselves out, so we’re pretty lucky.”

Getting into the Field

The Carlisles no-tilled their soybeans in 2019 and strip-tilled 1,100 acres ahead of their corn.

“2019 is the first year we’re strip-tilling every acre of corn. We really liked the new machine,” Kale comments. “We can cover about 80 acres on one fill. We had to make a few adjustments, but once we got going, I was impressed with what it was doing in the conditions we were facing. It was a little wet and cloddy, but we were able to pull at 8-10 mph no problem, while applying fertilizer.”

Kale recommends that strip-tillers who want to build their own strip-till system should give themselves plenty of time.

“Find someone with knowledge and experience that you can ask questions so you’re not shooting in the dark. That’s the number one factor on how efficiently you can get it done — having the right person to work with,” he says.