Why do Nebraska soils tend to have high potassium (K) availability, even with high yields and often without fertilizer K application? Why are yield responses to fertilizer-K infrequent (Figure 1)? The answers lie in the K applied in manure and irrigation water, and soil mineralogy.

There is much application of manure to cropland in Nebraska. A 25-ton/ac application of feedlot manure may supply 500 lb/ac K2O, which is equal to removal in about 2400 bu of corn grain.

The K concentration in irrigation water varies across counties and across wells within counties. In a 1200-sample UNL survey of water quality, the average K2O content per ac-ft of irrigation water was 39 lb/ac but county averages per ac-ft ranged from 13 lb in Gage County to 216 lb K20 /ac-ft in Grant County. The average K2O contents in lb/ac-ft varied by region of the state and were 30 lb for northeast, 31 lb for north central, 37 lb for south central, 39 lb for southeast, 44 lb for west, and 68 lb for west central. For comparison, the removal in a 250 bu corn harvest is about 52 lb K2O. Again, there was much variation across wells and irrigation water should be tested for concentrations of K and other nutrients. 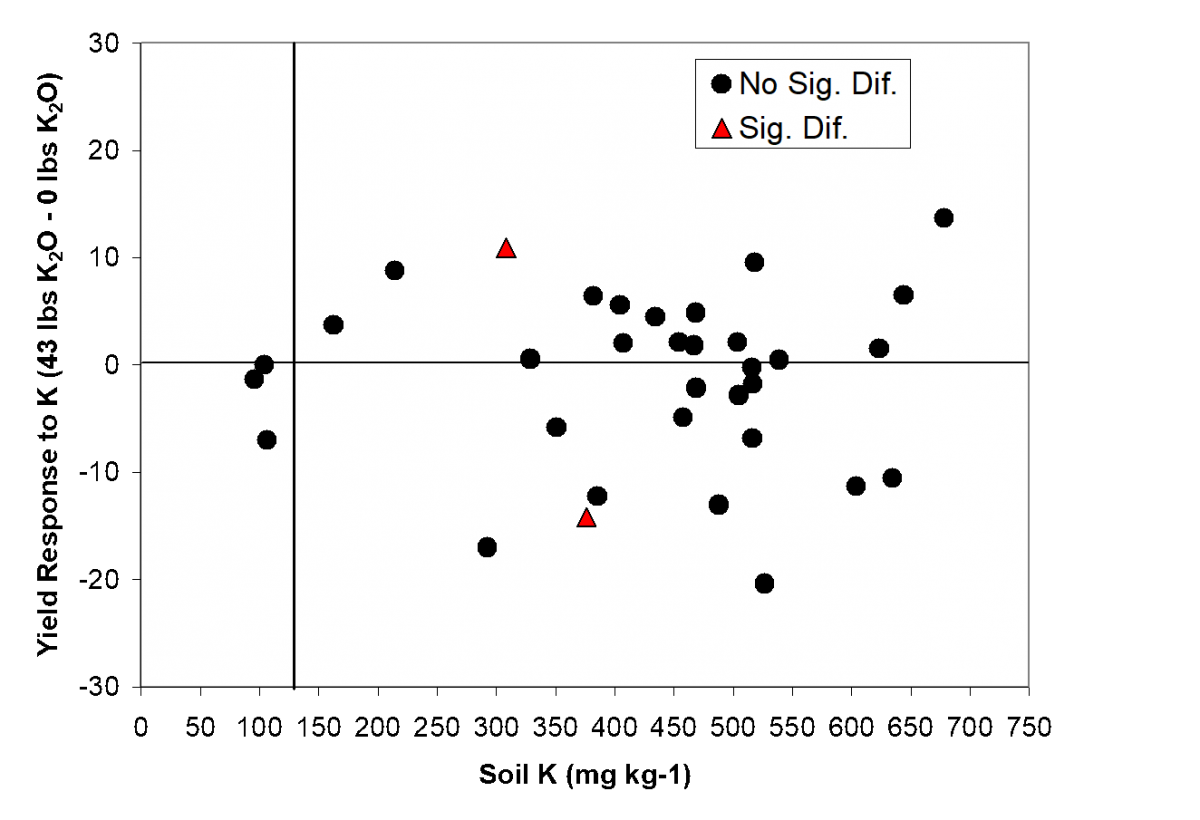 Figure 1. Thirty-four high-yield corn trials were conducted across Nebraska in 2002-2004. There was one significant yield increase and one decrease due to application of 40 lb/ac K2O. Three trials had soil test potassium (K) below the critical level, but showed no response to fertilizer K. Response was not related to soil test K levels.

The biggest factor to account for high K availability for Nebraska soils generally is the mineralogy of soils and the parent material from which the soils developed, specifically the K-feldspar content (typically KAlSi3O8). Soil profile layers were analyzed for 77 sites across Nebraska by NRCS Soil Survey (Figure 2). One to more than five soil layers were analyzed per sampling site. There are large gaps in data availability, but generally the K-feldspar content as percent of dry weight was relatively low in the west and high in the southeast. Soil series with less than 12% K-feldspar content were Canyon, developed from limestone, and Crowther, a poorly drained swale soil. Soil series with more than 25% K-feldspar were Sharpsburg, Alda, Cortland, Platte, and Hobbs with parent materials including alluvium, loess, and glacial till. The average of all samples was 17.8% K-feldspar which is estimated to be equivalent to about 120 tons/ac of K2O in the 0-40 inch soil depth with additional K at deeper rooting depths. Only a small fraction of the total K is available in a year, especially for sands, but a gradual and continuing release of K is expected.

Figure 2. K-feldspar as percent of soil dry weight determined from analyses of soil profile layers by the NRCS Soil Survey.

Regular testing of K availability for the 0-8 inch soil depth is most important for ensuring adequate K availability, that is, with exchangeable soil K above 125 ppm. Testing for concentrations of K and other essential nutrients in irrigation water provides information for fertilizer use decisions for several nutrients. For the reasons noted above, and especially because of soil content of K-feldspar, producers should not feel nervous when their soil test K remains above 125 ppm; generally, this is expected. When soil test K is less than 125 ppm, apply K at the UNL recommended rates, including for high yield crops. (See rates in the Nebraska Extension publication, Nutrient Management for Agronomic Crops in Nebraska.)

The Secrets of Soil Biology: How to Make it the Engine for a More Profitable No-Till Operation