3 Strip-Tilling Tips from a ‘Regenerative Agriculturist’

Rod Sommerfield has found an ally in strip-till as he works to return his farm’s soils to the nutrient level and health seen 150 years ago.

Pictured Above: FULL ROTATION. Mazeppa, Minn., strip-tiller Rod Sommerfield feels a two- or three-crop rotation is better suited to regenerating farm soils over a continuous corn rotation. On his farm, he follows a corn-soybean rotation. However, paying special attention to precisely how residue is managed and distributed ensures nutrients are available to crops when they need them.

As a strong proponent of “regenerative agriculture” — which Rod Sommerfield explains is proper residue management that recycles the carbon and other nutrients in the residue back to the following crops — his hopes for the future of the farm that’s been in his family since 1892 are bold.

Sommerfield and his son Rick now manage the farm, and they’ve zeroed in on a goal to ramp down inputs. “Our long-term goal is to be producing 300 bushels of corn per acre and 100 bushels of soybeans per acre with 100% of the nitrogen (N) and most of the other nutrients coming from nature itself,” Sommerfield says.

He’s heard from experts at the University of Minnesota that it’s not possible, but he continues undeterred. He cites studies by the university where surveyed fields showed about 43% of nutrients come from residue mineralization, 5-10% from atmospheric lightning, 8% from manure and 33% from the application of fertilizer (see chart below). 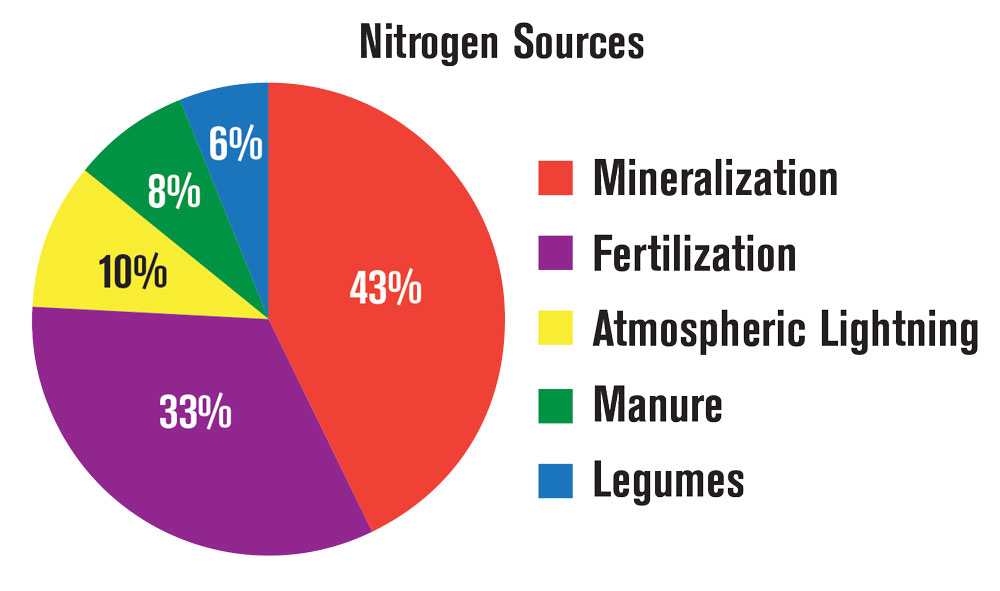 MANIPULATING MINERALIZATION. University of Minnesota studies have shown approximately 43% of nutrients come from residue mineralization. Despite being told that a grower can’t manage or manipulate that, Rod Sommerfield has witnessed it occur on his own Mazeppa, Minn., farm.

“Their position is that you can’t manage or manipulate mineralization,” Sommerfield says. “We’re totally on the opposite side of that. We’ve seen regenerative agriculture manage mineralization.”

Sommerfield has been banding fertilizer since 1972 and strip-till figures heavily into his regenerative practices. He feels that long-term conventional tillage around the country has created anaerobic soil environments that perpetuate themselves, and that the light touch of strip-till may be the perfect intermediary to return soils to their once rich state.

“Healthy soil function like lungs, exhausting spent biologic gases and taking in fresh oxygen,” he says. “Tillage has always been a short-term fix of oxygen that mineralizes carbon and degrades soil structure. But without new organic matter, soils become unable to breathe.

“The soil will then require more tillage to physically create pore space for root development, and for air and water to be held in the soil — in a sense, becoming addicted to tillage. Strip-till is a great way to transition back to more natural practices.”

Sommerfield feels a two- or three-crop rotation is better suited to regenerating farm soils over a continuous corn rotation. On his farm, he follows a corn-soybean rotation.

However, paying special attention to precisely how residue is managed and distributed ensures nutrients are available to crops when they need them.

“When harvesting corn, we leave as much of the stalk standing as possible by running the corn head close to the ear,” Sommerfield says. “In the spring, the ground will be drier and warmer for no-till or strip-tilled soybeans planted between the rows because less residue is on the ground.

“On our farm, the stalks stand all the way until the following fall harvest. This way, when we harvest soybeans, the high-carbon stalks will go through the combine and blend with the soybean straw coming out of the chopper.”

The residue mat left behind by the combine, being a natural blend of fresh and old residue, has almost a perfect carbon-to-nitrogen ratio for field composting.

“A lot of people say you can’t build soil during the soybean phase of a corn-soybean rotation, but we’ve seen just as much regeneration to the soils as we see on our corn phase,” he says.

Being vigilant of healthy mycorrhizal fungi populations in his soil has changed both where and how much added phosphorus (P) Sommerfield applies.

“If there is a plentiful supply of P for a young corn plant during early development stages, the plant often will reject mycorrhizal fungi’s attempts to form a symbiotic relationship with it,” he says. “We now try to limit P applied in the top 2-4 inches to no more than 16 pounds actual per acre. For this, we use liquid 10-34-0. Our main P dry fertilizer is 18-46-0 and we don’t put down more than 100 pounds per acre total.” 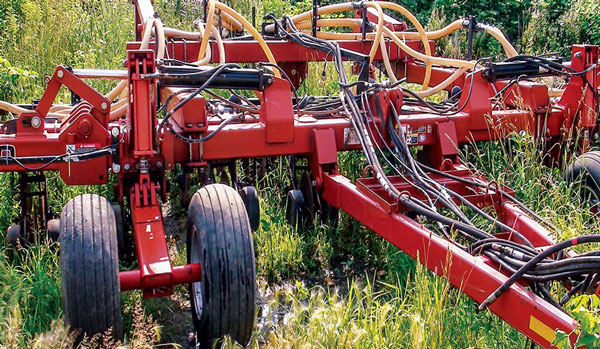 NUTRIENT APPLICATOR. Rod Sommerfield considers his 12-row, 30-inch Red Ball Stripper bar to be a precision nutrient placement tool. When farming new farm ground that hasn’t transitioned back to its natural tilth, he’ll likely strip-till it every spring to provide necessary tilth, while keeping residue on the soil surface to aid in humus creation.

“Strip-tilling keeps a lot of recycled K on the surface due to its high levels on the hard outer layers of decomposing crop residue,” Sommerfield says. “With what we do apply, strip-tilling K in a band helps keep it more available as it raises base saturation in the band area. This way, the soil deeper down is less likely to dry, which is important because K is only available when it’s soluble.”

On soybeans, he’ll apply up to 200 pounds per acre of 0-0-60, and on corn he’ll only go up to 100 pounds. In some of his closely watched test areas, though, he’s seen his regenerative practices pay off and he’s able to apply significantly less.

“The cover crops have helped with nutrient sequestration, too, but some of our management zones are getting around 300 bushels of corn per acre with only 150 pounds of applied nitrogen, 16 pounds of P and no K,” Sommerfield says.

With the goal of continuing to dial down inputs, Sommerfield has to soil test very carefully to ensure an accurate assessment of what’s available to his crops. He suggests testing often, but with strip-till it’s also important to be mindful of where to test.

“We see a tremendous root-mass increase with strip-till. We’ve dug plants in mid- August that have gone down over 60 inches, which is great, but that means it’s pulling nutrients from deeper,” Sommerfield says. “We usually soil test every other year following soybeans, but now we take 12-inch samples where we used to only take 6-inch cores. Fertilizer is placed deeper and roots are obviously going down, so that’s where we need to test. We also individual test each one of our management zones.”

3 Strip-Tilling Tips From a ‘Regenerative Agriculturist’