Pictured Above: A field trial conducted by the University of Minnesota near Becker, Minn. to evaluate the utility of sensor-based nitrogen management in coarse-textured soils.

There is considerable debate regarding the usefulness of canopy-sensing technologies for nitrogen fertilizer management. While the technology has been successfully implemented for some crops and regions of the U.S., its utility has been limited in others.

In this post, we discuss the utility of the technology based on studies conducted in different corn production regions in Minnesota. We focus on five topics that farmers should know about when considering adopting the technology.

1. The nuts and bolts of sensor-based nitrogen management

Understanding how the technology works is the first step for successful implementation. Plants can express their nitrogen status (nitrogen-deficient or -sufficient) in terms of plant color. In simple terms, the yellower they look the more nitrogen-deficient they are. Canopy sensors are capable of quantifying those differences even when they are indistinguishable to the human eye. With sensor-based nitrogen management, we give plants time to “sample” the soil-available nitrogen and then use plant greenness as a proxy to define in-season fertilizer application at variable rates. With sensor-based nitrogen management, it may be possible to apply the majority of the nitrogen rate at sidedress. A multiple-location study conducted over three years in Minnesota showed that only a small amount of nitrogen (40 lbs. N/acre) is needed to supply sufficient nitrogen before sidedress time (V8-V9).

A major component of sensor-based nitrogen management is the fertilizer recommendation algorithm. In short, the algorithm converts the plant greenness measurement into a nitrogen fertilizer prescription. Various algorithms have been developed but a common characteristic among them is their regional specificity. There are no algorithms developed specifically for Minnesota conditions. The closest to Minnesota are one developed for eastern parts of North Dakota (Franzen et al., 2014) and the Holland and Schepers algorithm (Holland and Schepers, 2010) that has user-specifiable parameters and follows the shape of a typical nitrogen rate by yield response curve that may be tweaked for individual fields.

Another similarity among all algorithms is the need for an N-rich strip, a calibration area with non-nitrogen-limiting plants. Canopy-sensing measurements collected from that area serve as a reference to tell the algorithm how “green” nitrogen-sufficient plants should look throughout the field. A large amount of nitrogen is applied in those areas (up to twice the recommended rate) at pre-plant or early vegetative states, giving plants time to respond to nitrogen fertilizer before it is time to sidedress. The N-rich strip should be placed across an area of the field that best represents the entire area. Don’t put them along problematic areas, like wet areas, that could influence nitrogen response. If there are areas within the field that are distinctly different, placing reference strips in each area is advised. 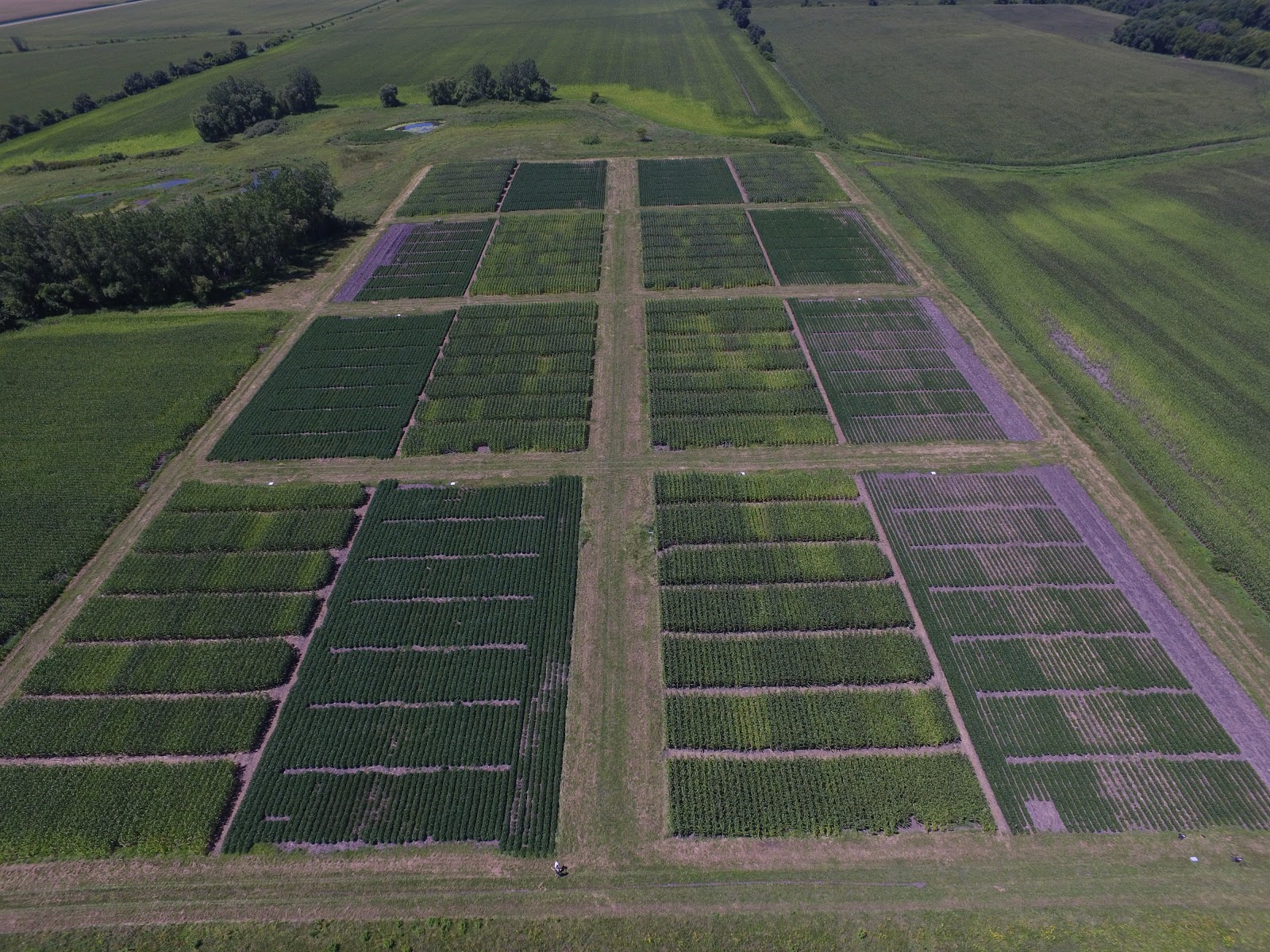 An aerial image of a field trial conducted by the University of Minnesota near Wells, Minn. to identify optimal wavebands for sensor-based nutrient management.

A study conducted at six locations throughout Minnesota in 2014 and 2015 indicated that the accuracy of sensor-based nitrogen fertilizer prescriptions is low at early development stages (Paiao, 2017). Canopy sensing at V4, for instance, results in unreliable estimates of nitrogen requirements. This is unfortunate because there is more flexibility for fertilizer management at early stages. Not only is there no requirement for expensive high clearance equipment but also nitrogen is applied early enough in the season, making it adequately available for plant uptake during the stages of yield potential determination.

Canopy-sensing at V12 results in greater accuracy for the determination of nitrogen needs, but fertilizer application at those later development stages requires high clearance equipment and is riskier as plants are in the phase of rapid growth and nutrient uptake. If fertilizer is applied and precipitation is not timely enough to incorporate nitrogen into the root zone, yield potential can be compromised.

Canopy sensing at V8 provides a tradeoff between prediction accuracy and flexibility for fertilizer application. The sensors, however, consistently underestimate nitrogen needs at that stage, indicating that a base nitrogen application of 35 lbs. N/acre might be required to secure full yield potential regardless of the measured plant greenness value.

It is important to recognize that other plant growth limiting factors like water stress, pest and disease outbreaks, and nutrient deficiencies other than nitrogen (such as sulfur) can also affect plant greenness in an indistinguishable way from nitrogen stress. Yellowing of corn leaves in wet springs for instance, may be a result of poor soil aeration and not nitrogen deficiency.

Because of those issues, sensor-based nitrogen management cannot always provide reliable estimates of nitrogen needs. A lot of research has been done recently to integrate canopy-sensing with other indicators of soil nitrogen availability, like crop models and soil nitrogen concentration, but their efficacy is still under investigation.

Considering the strengths and limitations of the technology, sensor-based nitrogen management in irrigated fields would benefit the most from the technology. Under those conditions, canopy-sensing and sidedress application can be delayed to later development stages without the risk of fertilizer not being incorporated into the soil for timely crop uptake. These conditions, however, represent only a small fraction of Minnesota corn acreage.

Sensor-based nitrogen management in rainfed fields can still be beneficial compared to the Maximum Return to Nitrogen (MRTN) approach, but growers should be aware of the technology’s limitations when defining sensing and fertilizer application time.

With increasing environmental concerns about pollution from agricultural use of nitrogen and high fertilizer prices, accurately quantifying crop nitrogen needs will become more important. Regardless of the fertilizer management strategy adopted, good agronomic practices should always be implemented to allow for full yields and reduce environmental degradation.