Gaining Acres with Strip-Till and the SoilWarrior

Purchasing equipment in an unstable market is a decision offering both risk and reward. Farmers are no strangers to taking risks with every acre they plant, but when it comes to cash flowing purchases and taking on debt, they need to see a solid return on investment before going all in.

The SoilWarrior strip-till system is an investment shown to reduce labor and fuel costs while increasing fertilizer efficiency for farmers who switch from conventional tillage. It is also more durable than most strip-till equipment, minimizing downtime in the field and is able to cover acres at higher speeds than many competitors.

And that’s just the basics of saving with the SoilWarrior. Some owners have found ways to generate extra income and significantly grow their operations that more than pays for the machine.

After working in ag retail for most of his career and questioning the efficiency of broadcasting fertilizer, Ty Fickenscher became interested in strip-till as a better way to feed crops through the 4R Nutrient Stewardship Program. He established Upward Ag Systems in 2014 and added strip-tillage to his list of custom services in 2015.

It started small with one customer, a Kuhn Krause Gladiator and 5,000 acres. After 2 years and more interest in his services, he decided to give the SoilWarrior a try using Environmental Tillage System’s rental program. He used his rental credits toward a lease to own purchase.

“Once guys found out we had it, we got a lot more commitments,” said Fickenscher. Now he covers about 18,000 acres per year; 13,000 of those with the SoilWarrior. “The biggest reason farmers come to us is that they don’t have the time, manpower or don’t want the additional equipment expense.”

Those limitations are Fickenscher’s gain.

He charges by the acre based on the type of product applied: a base rate for tillage with dry fertilizer and additional charges for anhydrous ammonia or cover crop seeding. The ability to place fertilizer and seed cover crops in one pass with the SoilWarrior has been a huge boost to his business.

“I really appreciate its versatility. We typically use coulters but can add shanks and attachments when needed. It’s a lot better than piecing together parts of different machines,” said Fickenscher. “It’s also very durable. Last year, we only had to replace a few parts due to wear, and every time I had service questions, someone from the company helped keep us going.”

But the part that really keeps customers coming back is the way it places nutrients.

“Getting nutrients throughout the root zone versus a band is important,” said Fickenscher. He’s been able to switch some customers from liquid to dry fertilizer because of how well it works. That change basically pays for his application charge. “Improving nutrient efficiency can lead to significant savings.” 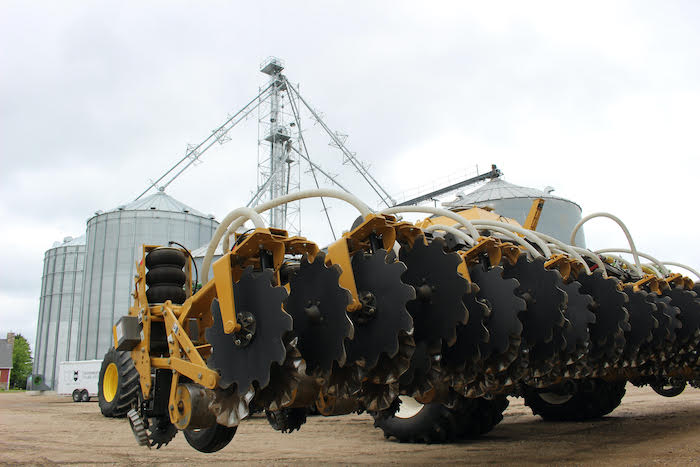 Brian Ryberg didn’t set out to gain land when he purchased a SoilWarrior in 2014. He made the shift to improve his bottom line and reduce his environmental impact. But things don’t always go the way we plan. Sometimes they turn out better.

Over the past 2 years, Ryberg Farms has gained 1,800 rental acres and 700 acres of custom strip-till work through that initial purchase.

“Every year, I get a little more interest from neighbors about what we’re doing with the SoilWarrior,” said Ryberg, who grows corn, soybeans and sugar beets in central Minnesota.

The first opportunity to grow came from a family that was looking for someone to rent 700 acres of farmland. Ryberg stood out because of his focus on conservation tillage. He met with the family and explained how he’s able to maintain topsoil, be more efficient with fertilizer to help protect groundwater and still grow high-yielding crops. They were impressed with his desire to preserve their land and try to make it better.

After choosing Ryberg to rent their acres, they introduced him to four other families who eventually decided he was the right fit for them as well.

“We had to start farming some of the acres conventionally due to timing, which made us crabby. But once we moved to strip-till, everyone has been impressed with what they saw,” said Ryberg. “Maybe we should shut up about what we’re doing, but I’ve always been one to spread the word when I find a good thing.”

Ryberg’s team of employees fully support the transition and feel like it’s the right direction for the farm. He believes the emotional tie to growing his business is the same one that attracts landlords to his efforts. It also doesn’t hurt that he’s earned national recognition as a 4R Nutrient Stewardship Advocate.

“We wouldn’t have bought a SoilWarrior if we didn’t think it was a smart business decision, but I also believe in taking care of the land. For those generations who worked hard to purchase and pay for it, that seems to resonate,” said Ryberg.

Are you looking for ways to generate extra income or grow your farm? Reach out to a member of our sales team to learn more about purchasing a SoilWarrior.

At Environmental Tillage Systems, our mission is to provide progressive farmers with an innovative production system that profitably rebuilds and revitalizes the land. See soilwarrior.com for more information.

Saving With the SoilWarrior: Improve Fertilizer Efficiency & Your Bottom Line