No-till, Kentucky farmers and the University of Kentucky have been inextricably linked from the very beginning. In 2022, farmers across the United States will come to Louisville, Ky., to celebrate the 60th anniversary of Christian County farmer Harry Young’s first commercial no-till planting during the National No-Tillage Conference.

The conference is Jan. 4-7, 2022, and this is only the second time the conference has been in Kentucky in its 30-year history.

“My dad and UK agronomist Shirley Phillips set out to transform farming across the U.S. and the world into a completely different kind of agriculture,” says John Young, son of the late Harry Young. “He wanted to spread the idea to more and more farmers.”

Young said his father was an avid conservationist and was sold on the idea of no-tillage after a trip to Dixon Springs, Ill., led by Reeves Davie, who was the county’s agriculture agent with the UK Cooperative Extension Service. 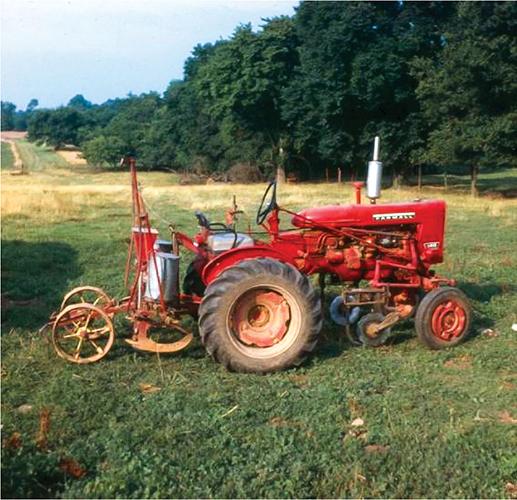 Harry Young hooked a modified mule-drawn, two-row planter to a small tractor to plant the first crop of commercial no-till corn in 1962.

No-till research had been going on for some time before Young’s first crop but was largely unsuccessful due to weed control issues. Young used herbicides 2, 4-D and atrazine for weed control and used a modified mule-drawn, 2-row planter that he pulled behind a small tractor to put the first crop in the ground.

After his first crop was successful, Phillips set up research plots on Young’s farm and Davie scheduled a field day to show others. The movement to a better way of farming had begun.

No-till was a practice Kentucky producers desperately needed. At the time Harry Young was experimenting with no-tillage, Kentucky farmers were struggling with grain crop production. Soil erosion, caused by conventional tillage on the state’s rolling topography, was destroying the state’s soils.

“Kentucky was headed for a situation that would have put us out of crop production,” says Lloyd Murdock, professor emeritus in the UK College of Agriculture, Food and Environment. “Using no-till, you stop most of the soil erosion. It allowed our farmers the opportunity to continue to be competitive in the national market.”

Murdock has conducted no-till research since joining the UK faculty as a soil scientist in 1970. He was recognized by No-Till Farmer Magazine as a No-Till Innovator in 2015. He has extensively researched no-tillage including nitrogen applications, the movement of lime in the soil profile, soil pH problems and compaction. He led a group of UK researchers that developed practices that made no-till wheat possible.

No-tillage has grown dramatically in the past 60 years since Young’s first plot of 7/10 of an acre of corn. According to the 2017 agriculture census, more than 104 million U.S. acres are in no-till production.

Frank Lessiter, editor of No-Till Farmer and founder of the National No-Tillage Conference, remembers traveling to Kentucky to visit with Harry Young during the early days of no-till.

The Youngs’ farming operation, which includes John and his son Alexander, continues today in Christian County. They practice 100% no-till on all the acreage they farm. They will be joined by John Young’s other son Jeffrey, assistant professor for agribusiness economics at Murray State University, as featured speakers during the national conference.

The conference will also feature a No-Till History Museum that commemorates the first commercial no-till planting on Young Farms and features many other Kentucky no-till milestones.

More information on the National No-Tillage Conference is available here.